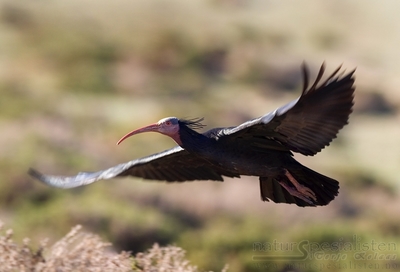 The Northern Bald Ibis (Geronticus eremita) is listed on the IUCN Red List as a “Critically Endangered” species on a global scale. It was rediscovered on a remote cliff of the Syrian desert in April 2002, following clues from local hunters and Bedouin nomads, in the framework of a UN/DGCS (Italian Development Cooperation) general fauna survey of the area. It suddenly became the rarest and most threatened bird in the Middle East!
It is a fascinating bird not only because of the symbolic values attached to it during millennia: it is also the contrast between its wrinkled and bald appearance as seen from close distance, with the majestic elegance and beauty of its flight over the desert horizon.

“IUCN and Birdlife Intl. chose to attempt to save this bird as it is a symbol and flagship for the rampant ecological degradation and desertification of the Syrian steppe, driving so many people into poverty and hardship” said Dr. Odeh Al-Jayyousi, IUCN West Asia Regional Director. However, preventing extinction of a long-range migratory bird starting from few surviving individuals, is something attempted with success only in the US so far (famous is the case of the Whooping Crane). It is certainly much easier to rescue a threatened bird that is resident; for instance the Crested Ibis rediscovered in China in the 1980s that was successfully rescued from extinction over a 30 year period. Interestingly, this ibis is like the “photographic negative” of the bald ibis .

In 2006, the Syrian First Lady, Asma Al-Assad played a crucial role in making the satellite tagging operation and the consequent discovery of the migratory route become true. It was then discovered that these ibises cross eight countries twice a year during their migratory flight from Syria desert to Ethiopia highlands.
Hunting at breeding grounds in Syria was curbed thanks to the effort of the the General Badia Commission. Minimizing disturbance by people during breeding is still an ongoing effort as interests about the birds attract many visitors and eco-tourists every year. IUCN is assisting the Syrian General Badia Commission in developing an Ibis Protected Area according to international standards, in Palmyra. On the other hand, thanks to the key cooperation of the Ethiopian Wildlife and Natural History Society, it was proved throughout recent years that no short-term threats at the wintering grounds in Ethiopia are in place. 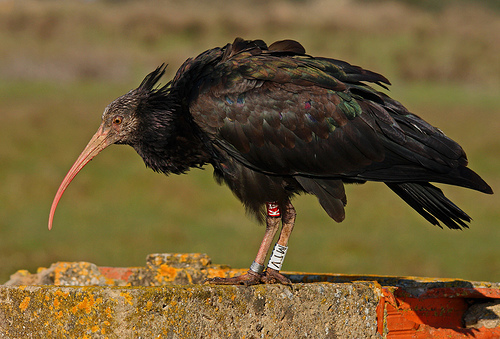 In July 2009, two immature birds in Palmyra were tagged with satellite transmitters. One of them was named Julia in honor of IUCN Director General Mrs Julia Marton Lefevre who had visited the colony earlier in the spring of 2009. At the end of the first day of migration, on 20 July 2009, and as soon as the birds reached the village of Tabarjal in northern Saudi Arabia, the ibis Julia was shot down.
The Saudi Wildlife Commission was ready to cooperate and take the lead in monitoring the ibis migratory route in Saudi with technical assistance from IUCN and BirdLife. During an expedition in March 2010, the Bald Ibis project team met with the hunter who killed ibis Julia in July 2009 and handed to him some awareness-raising material and pictures on the threatened bird. Another successful expedition of satellite tracking was implemented jointly by the Syrian General Badia Commission and the Saudi Wildlife Commission during summer 2010.
The Syrian First Lady was again instrumental in involving the Turkish First Lady and the Turkish Ministry of Forestry to start a key ibis transnational cooperation between the two countries. This has led to carry out a long-sought supplementation test at the breeding grounds last summer in Palmyra, Syria. This test was the first of its kind in the Middle East, and was made possible through the experience of Waldrappteam.
Two chicks born in captivity in Turkey, belonging to the same genetic stock of the Syrian-born ones, were released at the wild colony in Palmyra. Amazingly they followed one of the wild adults for almost 1500 Km along the migratory route up to southern Saudi Arabia.

“The hope is now to replicate this key operation this year and improve it, as it is clearly crucial in order to reinforce the last known wild ibis colony in the Middle East” said Khaldoun Alomari, IUCN West Asia Protected Areas Programme Officer.

Some days ago, Zenobia, an adult female, safely arrived in Palmyra, as the first of the colony – cheered by the rangers of the General Badia Commission. It was HE Prince Badar bin Saud himself, President of the Saudi Wildlife Commission, who stated that a hunter from the same group of those who had killed the Ibis Julia in 2009, had met Zenobia in the middle of the vast Saudi northern desert few days before reaching Syria. However, this time instead of shooting they recognized it as a threatened bald ibis and they just took a picture!

“Raising awareness of hunters along ibis migratory route is now one of the most urgent priorities to be pursued in the short term,” added Alomari.
Despite the weak hope to save the last few oriental bald ibises, the project partners are still urged and motivated to continue with this challenging conservation effort. (IUCN RedList)