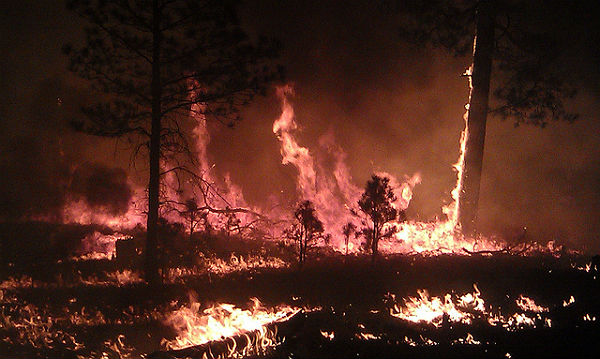 A massive wildfire in the New Mexico wilderness, the Gila Wilderness blaze or Whitewater-Baldy Complex fire, already the state’s largest blaze ever,  has spread to more than 218,000  since being started by lighting May 16, 2012. According to InciWeb, more than 1,200 firefighters were working to contain the blaze as of early Friday morning. The fire is reported to be 5 % contained with the remaining 95 % of the perimeter active and spreading.

Visibility in low-lying areas close to the fire could drop to 1.5-2.5 miles. The weather has hindered efforts to contain the wildfire. Large wildfires over rough terrain such as the Gila Forest Wildfire are able to generate their own wind as they burn. As the efforts continue, the weather will not be much help. Winds from the west will gust to between 15-25 mph through Friday and Saturday.

Lightning started the Whitewater-Baldy fire on May 16, and more than a thousand firefighters have battled the blaze since then. The area’s extremely rugged terrain and strong winds have hampered progress, while a mixture of timber, mixed conifer, ponderosa pine, pinon, and grass all burned. Officials have ordered a mandatory evacuation for Mogollon, a small community near the edge of the fire. According to figures released by the U.S. Forest Service, the Whitewater-Baldy fire had burned more than 218,000 acres, surpassing a fire that burned 156,293 acres near Los Alamos in 2011.

Areas close to the fire may experience air that is unhealthy for sensitive groups with conditions like asthma, heart conditions or lung issues. The elderly, infants and pregnant women should also exercise caution when outdoors in heavy smoke. Use caution when driving in low visibility conditions. 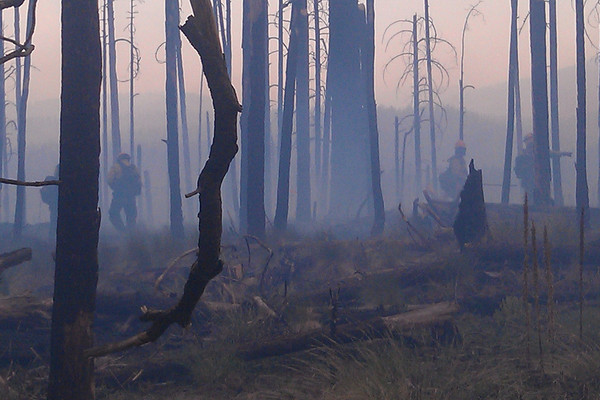 Hotshots are seen during burnout operations at the Gila National Forest blaze on May 30.

Experts say persistent drought, climate change and shifts in land use and firefighting strategies mean other Western states likely will see similar giant fires this season. Agencies in New Mexico, Colorado, Arizona and other Western states are bracing for the worst. Many counties have established emergency telephone and email notification systems to warn of wildfires, and most states have enlisted crews from nearby states to be ready when the big ones come.

According to the National Weather Service, a dry climate is expected to prolong drought conditions across the Great Basin and central Rockies during the fire season. Large portions of Nevada, Arizona, Utah, Colorado and New Mexico will remain under severe drought conditions.

Photos and maps can be viewed and downloaded on Flickr at www.flickr.com/photos/gilaforest