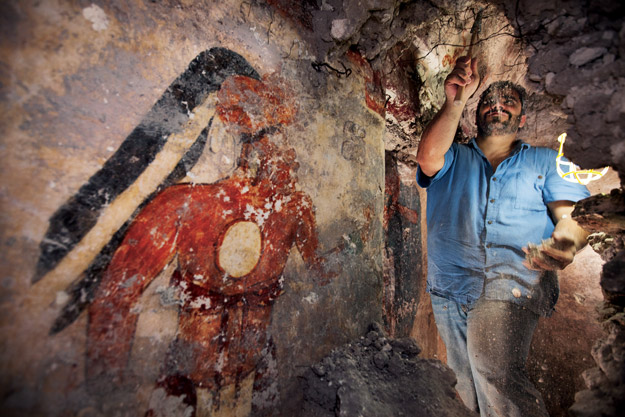 Reasonable ones among us kept saying for years that Mayans never said anything about the end of the world and apocalypse on December 21, 2012. But mainstream media kept pushing the story and keeping the global population in fear that something terrible is going to happen by the end of this year.

A new find by archaeologists confirms the Mayan calendar indeed does not end this year but keeps going, just like turning a page to a new calendar.

Prophets of doom have been saying that we’re in for an apocalypse because that marks the end of the Maya “Long Count” calendar, which was based on a cycle of 13 intervals known as “baktuns,” each lasting 144,000 days. But the researchers behind the latest find, detailed in the journal Science and an upcoming issue of National Geographic, say the writing on the wall runs counter to that bogus belief.

“It’s very clear that the 2012 date, this end of 13 baktuns, while important, was turning the page,” David Stuart, an expert on Maya hieroglyphs at the University of Texas at Austin, told reporters today. “Baktun 14 was going to be coming, and Baktun 15 and Baktun 16. … The Maya calendar is going to keep going, and keep going for billions, trillions, octillions of years into the future.”

The current focus of the research project, led by Boston University’s William Saturno, is a 6-by-6-foot room situated beneath a mound at the Xultun archaeological site in Guatemala’s Peten region.

Maxwell Chamberlain, a BU student participating in the excavations there, happened to notice a poorly preserved wall protruding from a trench that was previously dug by looters, with the hints of a painting on the plaster.

A team of archaeologists found a small room in Mayan ruins where royal scribes wrote on the walls — apparently like a blackboard — to keep track of astronomical records and details of the complex Mayan calendar. The writings date to about 1,200 years ago.

These are the oldest known astronomical tables from the Maya.  Scientists already knew the Mayans must have been keeping such records during that time period, but until now the oldest known examples dated from about 600 years later.

The room, about 2 meters (6-feet) square, contains walls decorated with images of a king and some other notable figures, as well as astronomical numbers and writings, the scientists said. The room had a stone roof rather than a thatched one, which may indicate the importance of the room.

Why did they write on walls, as opposed to other Mayan texts that have been found on bark paper?

The time period of the early 9th century was not a stable time for the Mayans, as there was political turmoil between the various city-states of the time, and the researchers said that perhaps the Xultun scribes wished to make a more permanent record of their data related to the calendar.

Newly found writing on walls of the ancient room shows wide ranges of accumulated time, including a 17-baktun period. “There was a lot more to the Maya calendar than just 13 baktuns,” said Stuart, talking with reporters. Seventeen baktuns would stand for about 6,700 years, which is much longer than the 13-baktun cycle of 5,125 years. However, Stuart cautioned that the time notation shouldn’t be read as specifying a date that’s farther in the future than Dec. 21.

“It may just be that this is a mathematical number that’s kind of interesting,” he said. “We’re not sure what the base of the calendar is.”

William Saturno, an archaeologist at Boston University who led the team of archaeologists said many different scientists have been trying to get the word out that the end of the Maya culture’s 13-baktun Long Count calendar doesn’t signify the end of the world, but merely a turnover to the next cycle in a potentially infinite series — like going from Dec. 31 to Jan. 1 on a modern calendar.

Sadly, we may never understand the full context of the workroom. Many of the glyphs are badly faded. Worse, the entire city of Xultún was looted clean during the 70s, leaving very little other writing or antiquities.

Because of this, and despite Xultún’s obvious prominence in the Maya world, many archaeologists had written off the site. “And yet we’ve still found things here that we’ve never seen anyplace else,” Saturno said. “And we only started looking three years ago.”

The Maya at Xultún were likely less concerned with the end of the world than the end of their world, according to Mayan-writing expert David Freidel of Washington University in St. Louis.

For ninth-century Maya, tabulating astronomical calendars to predict times of plenty was akin to gauging the stock market today, said Freidel, who wasn’t involved in the new study.

When the Mural was made, the Xultún region was facing “a period of intense drought. In fact, cities were collapsing in various parts of the Maya world in this era,” he said.

“The preoccupation of this king and his courtiers with astronomical calculation is not an arcane exercise. It has a very practical consequence for the people of the city of Xultún, which is, What the hell is going on with the economy?”