On February 10th there was filament eruption in the northern hemisphere that produced CME which traveled few days before reaching our magnetosphere on February 14. As magnetic disturbance rippled around the Arctic circle on February 14th, it opened a crack in our planet’s shield and it is still a puzzle to our scientists. At the time, local solar wind data showed nothing but disturbance that just happened. The interplanetary magnetic field (IMF) amplified the display. The IMF near Earth tilted sharply south for long durations, opening a crack in our geomagnetic field. Solar wind poured in and it helped to trigger a brief G1 Geomagnetic Storm at high latitudes and fueled the widespread auroras.

The magnetosphere acts as a shield that protects us from solar storms. Expert say that the reason for this outburst is still not completely clear. 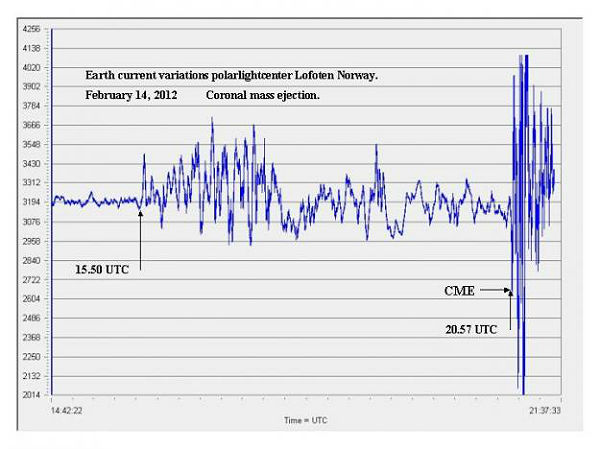 Immense cracks sometimes develop in Earth’s magnetosphere and remain open for hours. This allows the solar wind to gush through and generate geomagnetic storms. And such occurrences sometimes cause problems with satellites, radio communication and power systems. The solar wind is a fast-moving stream of electrically charged particles (electrons and ions) blown constantly from the Sun, mostly from its coronal holes. The wind can get gusty during violent solar events, like coronal mass ejections (CMEs), which can shoot a billion tons of electrified gas into space at millions of miles per hour. 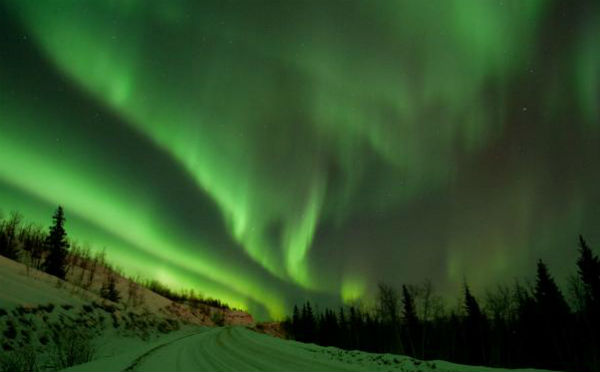 US Defense Meteorological Program satellite photographed a whirlpool of Northern Lights over the Bering Sea on Feb. 14-15 when Arctic skies erupted with unusual display of auroras that observers said was among the best in months. A number of images from the DMSP F18 satellite (bellow) captured the dramatic auroral event of the last couple nights. 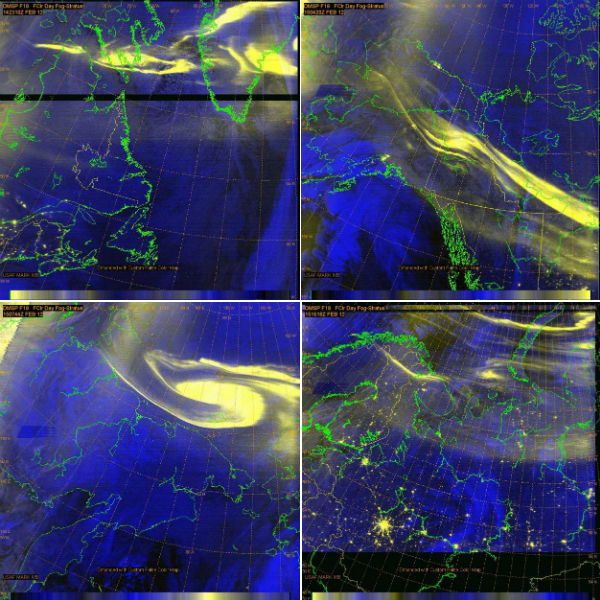 These cracks don’t expose Earth’s surface to the solar wind. Our atmosphere protects us, even when our magnetic field doesn’t. The effects of solar storms are felt mainly in the high upper atmosphere and the region of space around Earth where satellites orbit.

Solar activity should remain low heading into the weekend. Sunspot 1416 is heading for the western limb, and will soon be out of direct Earth view. Sunspot 1418 (which is located to the east of 1416) appears to be growing again. Old region 1408 rotated into view on the eastern limb and a small spot remains visible. This is second active region making second rotation this month after Sunspot 1402 (now renumbered as 1419). All other regions remain stable. 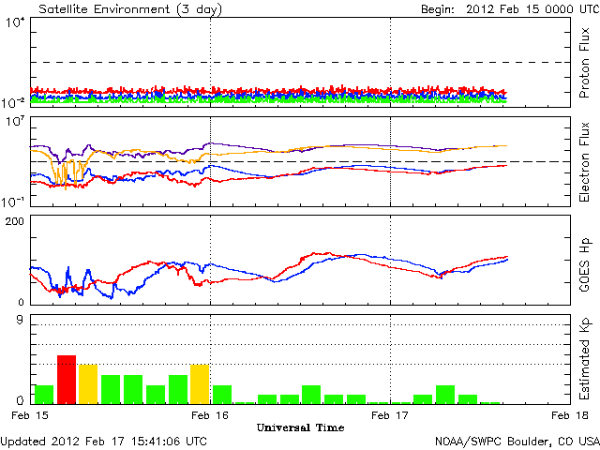 The sun’s output has flatlined again due no sunspots actively flaring. NOAA forecasters put the chance of an M-class flare during the next 24 hours at no more than 1%. Solar activity should remain low. However, coronal holes at western limb are still blowing solar wind stream which is likely to sail south of our planet, making little impact tomorrow. We shall see how our geomagnetic field displays the impact. There could be some nice aurora displays at high latitudes.

Joint USAF/NOAA Report of Solar and Geophysical Activity (16 Feb 2012)
Solar activity was at very low levels. The disk and limb were quiet and stable. No Earth-directed CMEs were observed during the period. Solar activity is expected to be very low with a chance for C-class activity for the next three days (17 – 19 February).
The geomagnetic field was at quiet to active levels. ACE solar wind velocities varied between 350 to 400 km/s while the Bz component of the interplanetary magnetic field was mostly northward to +5 nT. The geomagnetic field is expected to be at mostly quiet levels on day one (17 February) through late on day two (18 February). Late on day two and through day three (19 February), field activity is expected to increase to quiet to unsettled levels, with isolated active levels, due to recurrent coronal hole high speed stream effects.

And here is something interesting. SOHO’s LASCO C3 coronograph recorded on February 15 strange image at 14:18 UTC. Officials say it is unusual error. 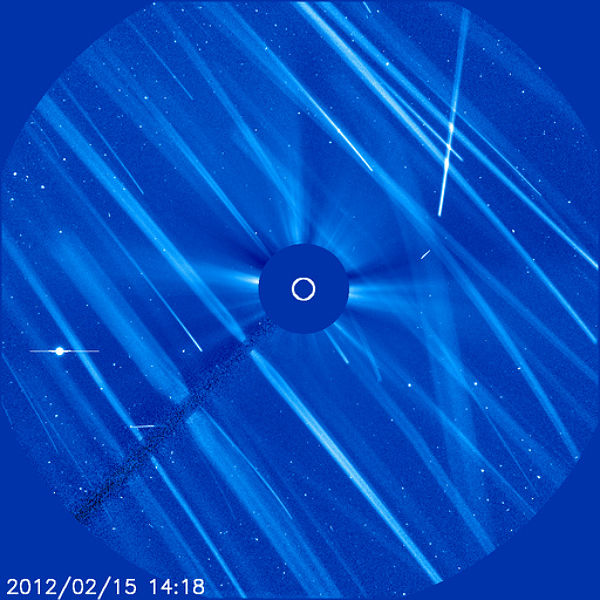