New research has revealed an unknown mechanism of the magnetosphere– electrons from the Sun are propelled by electrical energy higher than previously thought, ultimately creating displays of northern and southern lights or auroras.

The formation of auroras starts with supersonic plasma propelled from the Sun as high-speed, charged particles into space. When these particles get near Earth, they are deflected and funneled in streams along the magnetic field lines, flowing towards the poles eventually.

"Most electrons in the magnetosphere don't reach the part of the upper atmosphere called the ionosphere, because they are repelled by the Earth's magnetic field," said lead author Shun Imajo of Nagoya University's Institute for Space-Earth Environmental Research.

Some particles are accelerated into the Earth's upper atmosphere, where they collide with and excite oxygen and nitrogen atoms at an altitude of roughly 100 km (62 miles). When the atoms relax from their state of excitation, they emit the auroras. However, many details about this process are still unknown.

"We don't know all the details of how the electric field that accelerates electrons into the ionosphere is generated or even how high above Earth it is," Imajo added.

"Our study shows that the electric field that accelerates auroral particles can exist at any height along a magnetic field line and is not limited to the transition region between the ionosphere and magnetosphere at several thousand kilometers," said Imajo. "This suggests that unknown magnetospheric mechanisms are at play."

The team came up with the findings by studying data from ground-based imagers in the U.S. and Canada from the electron detector on the Japanese satellite, Arase. The data was taken from September 2017, when Arase was at an altitude of about 30 000 km (16 800 miles) and located within a thin active auroral arc for a few minutes.

The researchers were able to measure the upward and downward movements of electrons and photons, eventually finding the acceleration region of electrons began above the satellite and extended below.

To further investigate the high-altitude acceleration region, the team's next goal is to analyze data from multiple aurora events, compare observations of high and low altitudes, and conduct numerical simulations of electric potential.

"Understanding how this electric field forms will fill in gaps for understanding aurora emission and electron transport on Earth and other planets, including Jupiter and Saturn," Imajo concluded. 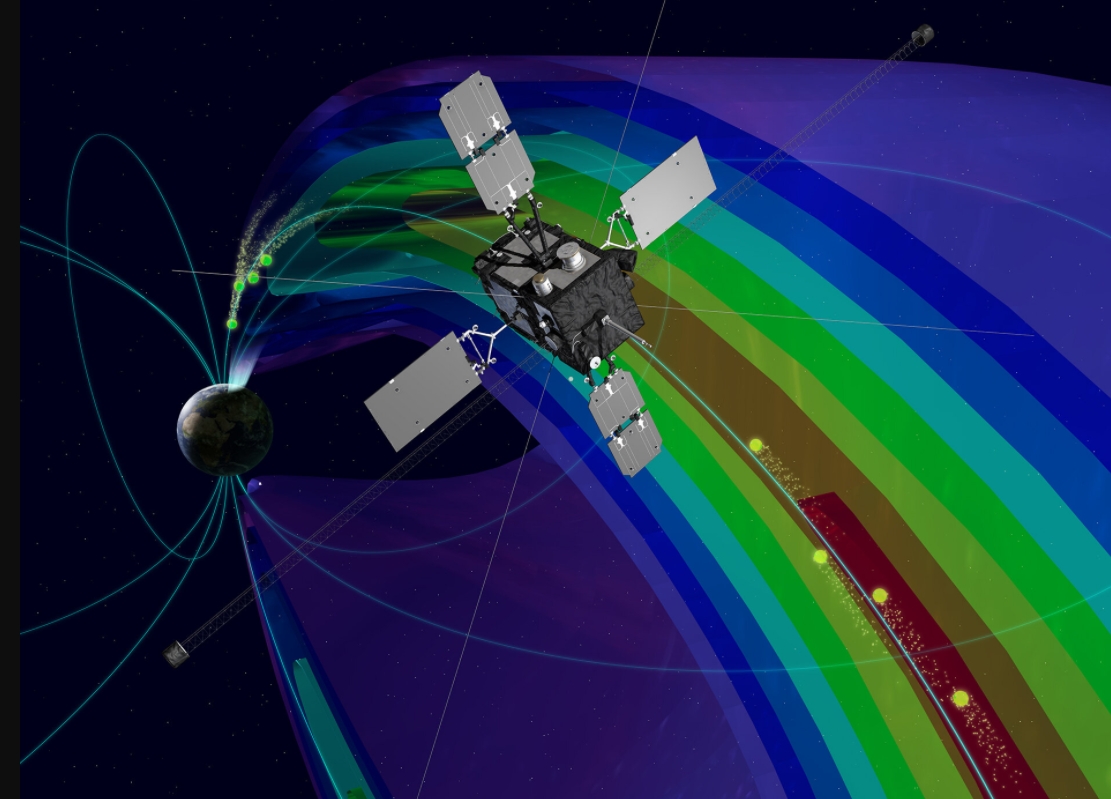 Bright, discrete, thin auroral arcs are a typical form of auroras in nightside polar regions. Their light is produced by magnetospheric electrons, accelerated downward to obtain energies of several kilo electron volts by a quasi-static electric field. These electrons collide with and excite thermosphere atoms to higher energy states at altitude of ~ 100 km; relaxation from these states produces the auroral light. The electric potential accelerating the aurora-producing electrons has been reported to lie immediately above the ionosphere, at a few altitudes of thousand kilometres. However, the highest altitude at which the precipitating electron is accelerated by the parallel potential drop is still unclear. Here, we show that active auroral arcs are powered by electrons accelerated at altitudes reaching greater than 30,000 km. We employ high-angular resolution electron observations achieved by the Arase satellite in the magnetosphere and optical observations of the aurora from a ground-based all-sky imager. Our observations of electron properties and dynamics resemble those of electron potential acceleration reported from low-altitude satellites except that the acceleration region is much higher than previously assumed. This shows that the dominant auroral acceleration region can extend far above a few thousand kilometres, well within the magnetospheric plasma proper, suggesting formation of the acceleration region by some unknown magnetospheric mechanisms.