In a new study published recently in Nature Physics, researchers at Shandong University in China and the National Center for Atmospheric Research in the U.S. provided new insight into the effects of solar flares on the Earth's magnetosphere. The scientists demonstrated that solar flare effects extend throughout the geospace via electrodynamic coupling, and are not limited, as previously believed, to the atmospheric region where radiation energy is absorbed.

The magnetosphere is usually described as the Earth's protective barrier against other solar particles as it prevents them from penetrating the planet's other protective layers.

Previous studies show that when the solar wind's direction is opposite to the magnetosphere's magnetic field, magnetic lines from these two regions can connect, which means that some solar wind particles can be transmitted directly to the space surrounding the Earth.

"We asked ourselves: Can the flare process, which is characterized by enhanced radiation, not only directly affect the Earth's ionosphere, but also cause disturbance in the magnetosphere like the solar wind?" said professor Jing Liu, one of the study's authors.

The team studied data gathered by different satellites during a solar flare event on September 6, 2017. They adopted a numerical geospace model called the high spatial-temporal resolution magnetosphere ionosphere thermosphere model (LTR), which reproduces the changes triggered by solar flares in the coupling system between the magnetosphere and ionosphere. 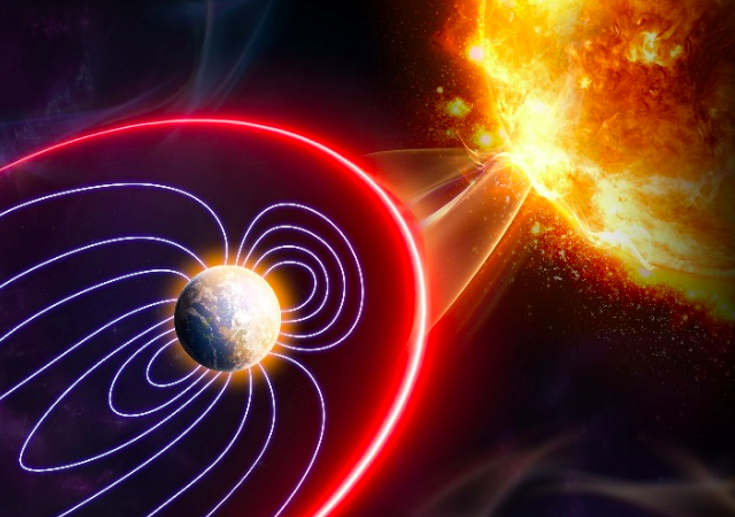 Findings revealed the effects of solar flares on magnetosphere dynamics and the electrodynamic magnetosphere-ionosphere coupling. The researchers observed a fast and large increase in flare-induced photoionization of the polar ionospheric E-region at altitudes between 90 and 150 km (56 and 93 miles).

The phenomenon appeared to have numerous effects on the geospace region, including a lower Joule heating of the planet's upper atmosphere, a convection reconfiguration, and changes in auroral precipitation.

"We demonstrated that solar flare effects extend throughout the geospace via electrodynamic coupling, and are not limited, as previously believed, to the atmospheric region where radiation energy is absorbed," explained Liu.

"Due to the similar solar-magnetosphere-ionosphere coupling process in other earth-like planets, our study also provides new clues for exploring and understanding the effects of solar flares on other planets. In my future research, I plan to study the effects of flares on planets with the same magnetosphere (such as Jupiter, Venus, and Saturn)."

The Earth’s magnetosphere is the outermost layer of the geospace system deflecting energetic charged particles from the Sun and solar wind. The solar wind has major impacts on the Earth’s magnetosphere, but it is unclear whether the same holds for solar flares—a sudden eruption of electromagnetic radiation on the Sun. Here we use a recently developed whole geospace model combined with observational data from the 6 September 2017 X9.3 solar flare event to reveal solar flare effects on magnetospheric dynamics and on the electrodynamic coupling between the magnetosphere and its adjacent ionosphere, the ionized part of Earth’s upper atmosphere. We observe a rapid and large increase in flare-induced photoionization of the polar ionospheric E-region at altitudes between 90 km and 150 km. This reduces the efficiency of mechanical energy conversion in the dayside solar wind–magnetosphere interaction, resulting in less Joule heating of the Earth’s upper atmosphere, a reconfiguration of magnetosphere convection, as well as changes in dayside and nightside auroral precipitation. This work thus demonstrates that solar flare effects extend throughout the geospace via electrodynamic coupling, and are not limited—as previously believed—to the atmospheric region where radiation energy is absorbed1.