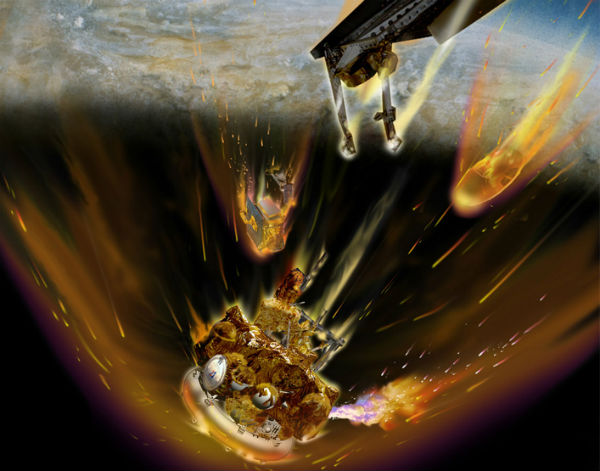 Russian Mars probe Phobos-Grunt, stranded in Earth orbit since its main engines failed to fire after launch on Nov. 8th, is beginning to sink back into the atmosphere. Analysts expect re-entry to occur sometime in early to mid-January 2012. Until then, it is possible to see the doomed probe zipping brightly across the night sky. Kevin Fetter video-recorded this pass over his home in Brockville, Canada, on Dec. 8th:

On Dec. 8), a prominent Russian scientist apologized in open letter for failure of Phobos-Grunt mission and it’s future languishing in Earth orbit. Russian space experts are now working on the issue of re-entry and the “probability of where and which fragments may hit the ground (if any). One of the scientific instruments onboard Phobos-Grunt contains radioactive material, Cobalt-57. According to Russian scientists the amount of this material is less than 10 micrograms, and according to evaluations, should pose no significant problems.

The next steps of the Russian space science agenda are robotic moon missions called Luna-Glob and Lunar-Resource, and discussions between Russia, ESA and NASA are under way regarding collaboration on the ExoMars and Russian Mars-NET missions to the Red Planet. (Space.com)

“Moreover, the Russian Academy of Sciences would like to prepare a new mission to Phobos,” Zelenyi said, but no decision has yet been made on this undertaking.