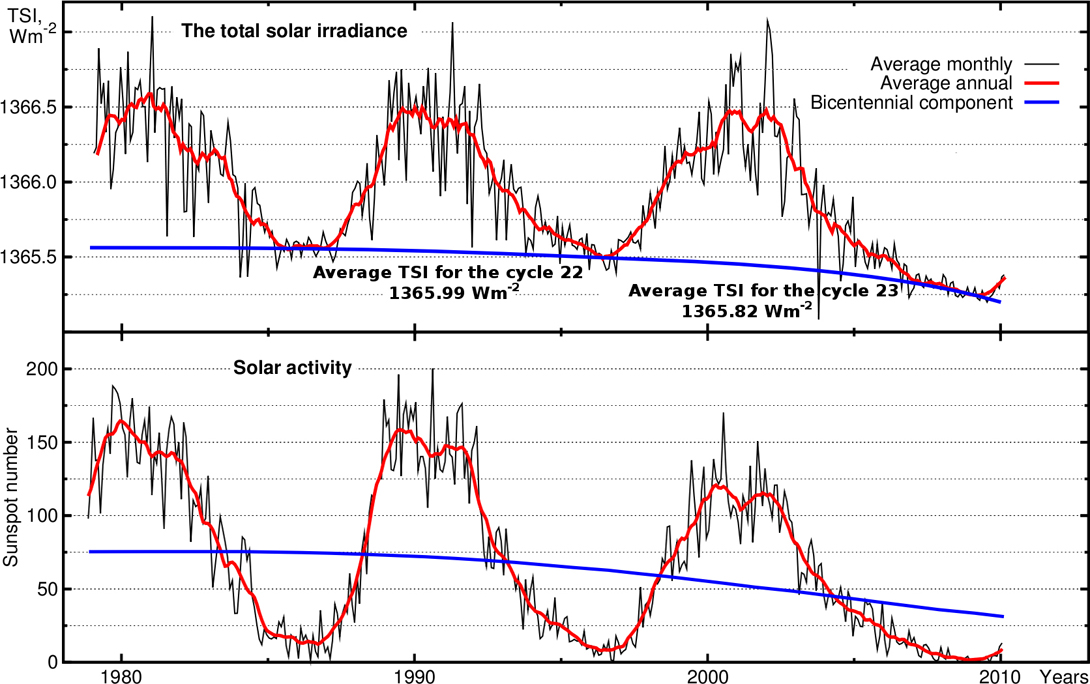 In a study of cyclic behavior of the Sun, Russian scientists now predict 100 years of cooling. IceAgeNow reports that these are not just any scientists. This forecast comes from astrophysicist Dr. Habibullo Abdussamatov, head of the Russian segment of the International Space Station, and head of Space Research of the Sun Sector at the Pulkovo Observatory of the Russian Academy of Sciences.

The Russian scientists began by looking at a paper published by J. A. Eddy* in 1976 that documented the correlation between sunspot activity and corresponding large – and disruptive – climate changes on Earth.  Disruptive because the changes frequently lead to economic and demographic crises that affected the existence of entire nations.

Conducting research similar to Eddy’s, Russia’s Eugene Borisenkov discovered a quasi 200- year cycle of global cooling during the past 7,500 years that correlates to times of sunspot minima similar to the Maunder minimum. Abdussamatov points that these were also times when any industrial influence was non-existent.  Our planet warms and cools in predictable 200-year cycles corresponding to 200-year variations in the size and luminosity of the Sun, the scientists found. Previous global warmings – of which there have been many – have always been followed by deep cooling. The 200-year variations in sunspot activity and total solar irradiance (TSI) are the dominating reason for climate change. 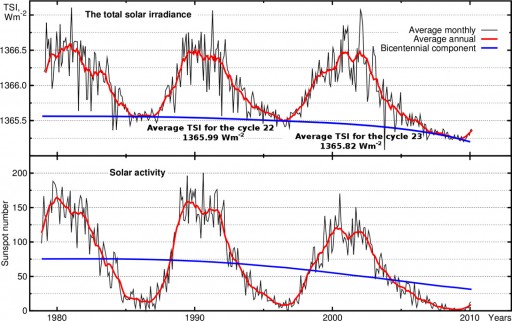 “In whole, the solar cycles are a key to our understanding of different cyclic variations in the nature and society.” Dr Habibullo Abdussamatov, head of Space Research of the Sun Sector at the Pulkovo Observatory

The existence of the 11-year and 200-year solar cycles of identical and synchronized variations of luminosity, sunspot activity and diameter of the Sun is one of the most reliably ascertained facts in solar physics. The study of physical processes on the Sun not only gives us an understanding of a large number of astrophysical questions, but also of the questions of geophysics, meteorology, biology and medicine. All energy sources used by humanity are linked to the Sun. The heat and light of the Sun ensured the development of life on the Earth, formed the deposits of coal, oil, gas etc.

“All life on the Earth and its future conditions directly and almost in whole depend on the total solar irradiance (TSI).” Dr Habibullo Abdussamatov, head of Space Research of the Sun Sector at the Pulkovo Observatory

Check out the theories of Croatian scientist Vladimir Paar:

“Measure temporary variations of shape and diameter of the Sun, as well as fine structure and dynamics of the granulation on the Service module of the Russian segment of the International Space Station” by Dr Habibullo Abdussamatov

1975 New York Times: “Scientists Ask Why World Climate is Changing, Major Cooling May Be Ahead”, May 21, 1975 – By Walter Sullivan

Mitchell, J. Murray, Jr. (1975). “A Reassessment of Atmospheric Pollution as a Cause of Long-Term Changes of Global Temperature.”