A hybrid storm currently lashing the French Riviera with gusty winds, rough seas and rain is rare in Medditerranean. This particular storm seems to have been born out of a slow-moving, upper-level storm pestering the area from Spain and France to Italy since the middle of last week.

Interestingly, it seems the storms are more likely to form as Europe cools down in the fall and winter, when the water is warmest relative to the land. Hence, arguing against the suggestion of their tropical or even subtropical nature. Perhaps Mediterranean storms of this caliber need a classification of their own according to AccuWeather.

Major cyclone over the western Mediterranean causes floods in Spain, France and Italy. In Genoa ,on Friday 4 November, 6 people were killed after 181 mm of rain fell in just one hour causing a flash flood in the city centre. In Spain, on 6 November, four flooded rivers in the Basque Country caused broken roads and railways.

A sequence of EUMETSAT Meteosat-9 10.8 µm IR images at 6-hour intervals (above) showed the development of an unusual tropical cyclone over the western Mediterranean Sea during the 06 November – 08 November 2011 time period. The tropical cyclone was designated “01M” in a bulletin issued by NOAA/NESDIS Satellie Analysis Branch at 18:19 UTC on 07 November. 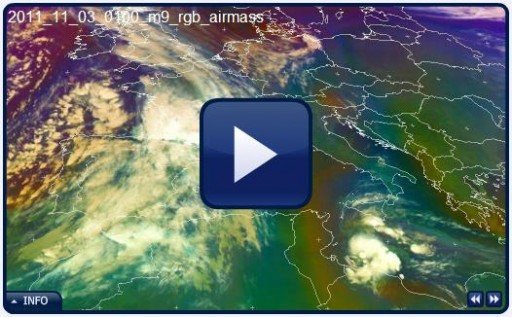 Wind speeds were estimated to have reached 45 knots according to various satellite analysis techniques.