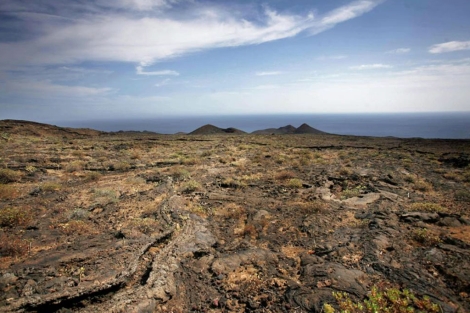 At 9 PM UTC yesterday, authorities have finally confirmed that an eruption took place on the ocean floor 5 km from Restinga, the southernmost location on El Hierro. IGN (Spanish seismological agency) has set the eruption depth at 600 meters. The alert level remains at yellow and authorities are asking the population to remain calm.

The confirmation came after that scientists from IGN and CSIC (Consejo Superior de Investigaciones Científicas) have been circling the presumable spot of the eruption with helicopters. An important number of dead fish where the convincing sign that an eruption took place. Until then it was presumed that an eruption took place, but only based on indirect instrument readings (harmonic tremors, decrease of deformation, etc.). 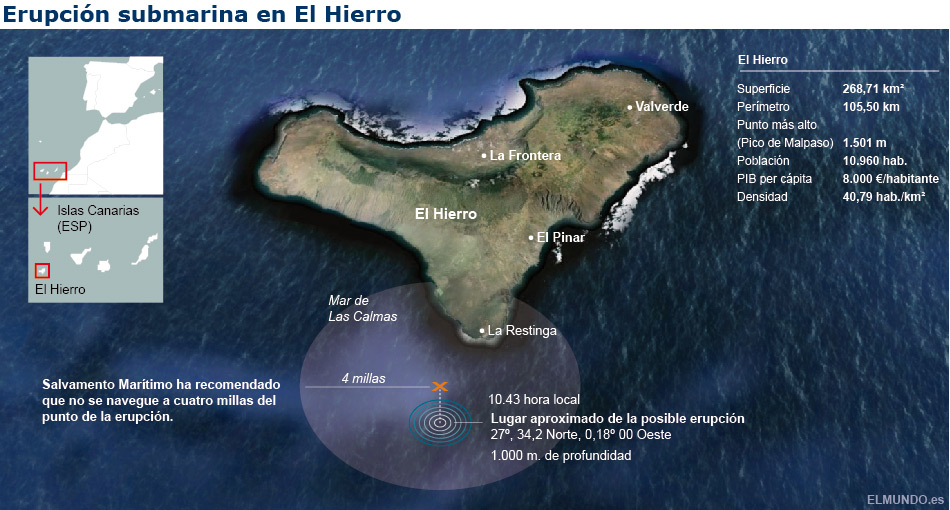 Carmen Lopez from IGN, said to the press that the next 24 hours will indicate whether the eruption vent widens in if it does, in which direction (towards the island or towards the south).

Although over 200 years have elapsed since the last eruption, El Hierro has the largest number of volcanoes in the Canaries with over 500 open sky cones, another 300 covered by the most recent outflows, and some 70 caves and volcanic galleries, notably the Don Justo cave whose collection of channels surpasses 6km in length. 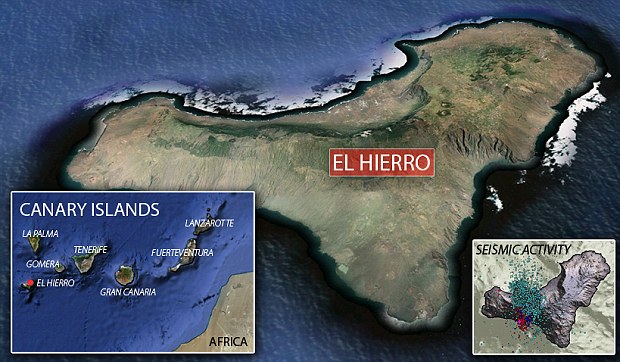 Earthquake.Report website got a good point in their report regarding the excellent possibility of using the Nautilus ROV

What a shame ! The Nautilus ROV, a remotely operated deepwater robot is currently diving towards the Gettysburg Seamount off the coast of Portugal (see video link above). It left Malaga on Saturday!
We do not want to decrease the value of the Portugal seamount dives, but science has the occasion in El Hierro to search and watch in HD for the first time an underwater volcano eruption which has been closely monitored by many instruments for months. We cannot understand why the Spanish government does not make a deal with the Portuguese government to call the Nautilus (or another ROV) directly to El Hierro. What are they waiting for? We think that in modern times science has his priorities too. So we call upon the Spanish and Canary Island authorities to contact the Nautilus management and hope to see the ship within a few days around El Hierro.

El Hierro has suffered, since mid-July 2011, around 9,600 earthquakes caused by magma activity in the base of the island, the strongest of them on Saturday night, which reached a magnitude of 4.3 degrees on the Richter scale. If confirmed, this eruption will be the first recorded in Spain since 1971, when the Teneguía volcano emerged on the island of La Palma. 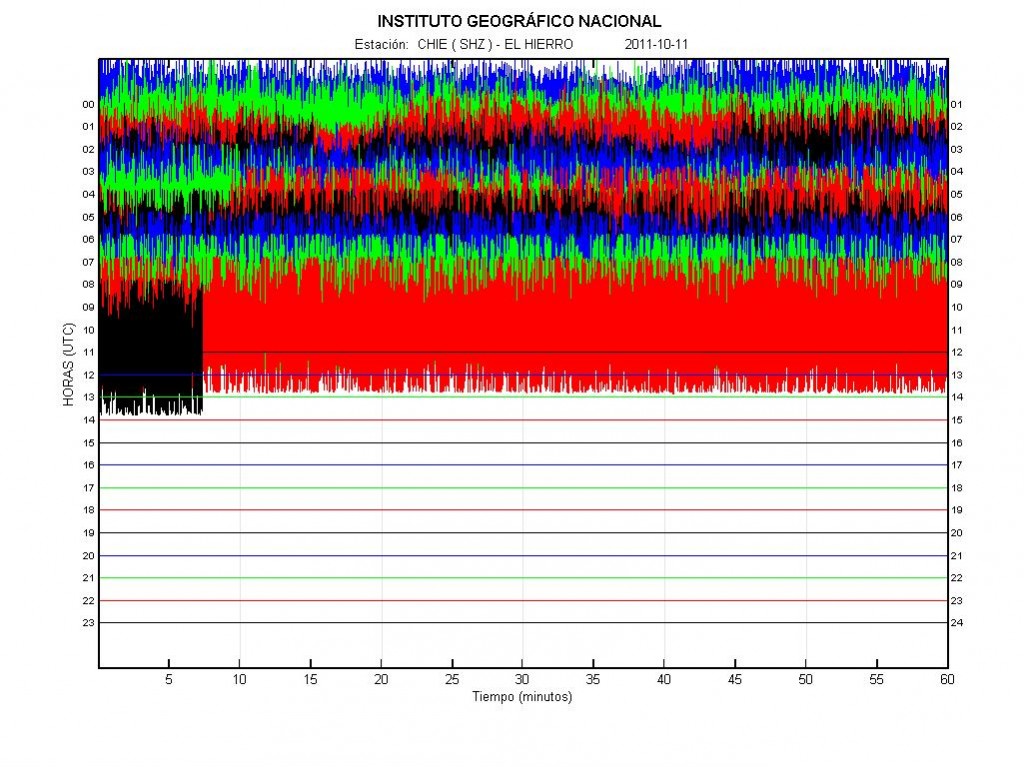 An (second) eruption closer to the island cannot be ruled out, but has a very low probability following Spanish volcanologists. As there is no real visual proof of an eruption, volcanologists have reported “a probable eruption” based on deduction of the measured parameters. A very good indication of magma being released at the bottom of the sea is the decrease in deformation (indicating less pressure from the underground).

Fishing vessels have been ordered not to throw their nets in the expected eruption area.  As far as now, no gases or bubbles have been detected in the area which is supposed to be the eruption area although there was reports of dead fish floating in nearby area. This does not necessarily mean that there is no eruption, but that the depth of the magma vent is at least several hundred meters below sea level. 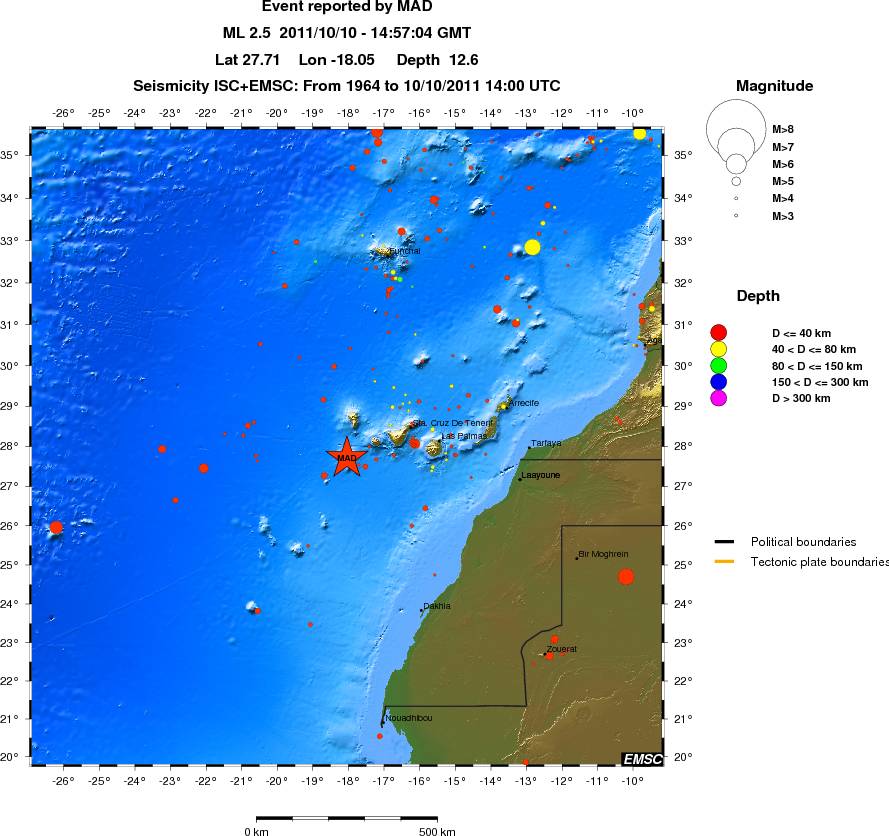 The Spanish Civil Guard (Guardia Civil) advised almost 50 residents of the municipality of La Frontera to leave their homes because of landslide fears. Two units of the Spanish military’s emergency intervention unit (EMU) were also placed on standby to depart the nearby island of Tenerife to assist in the possible evacuation of hundreds of other El Hierro residents.

Meanwhile, the island’s main tunnel (Tunel del Golfo), which links Frontera to Valverde, was shut forcing motorists to travel across the 280-sq-km island via a mountain road. The Cabildo de El Hierro also ordered the closure of schools. 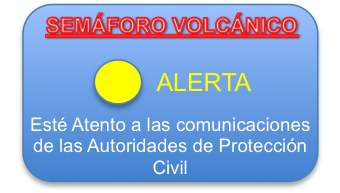 It is now clear from seismic plots that magma is moving at El Hierro with the initiation of seismic tremor. Around the time of the possible eruption there were a small number of shallow earthquakes (<3 km deep), indicating that magma may have been at this level or is producing stress in this area. It is also important to note and stress at this point that an undersea eruption (if it has occurred, which has still not been confirmed as of yet) is relatively safe as long as due caution is applied and the situation does not change dramatically, officials have been quick to give advice and it should be listened to. The slight change in location of the earthquakes from SW FRONTERA to SW EL PINAR may also be important and may indicate that magma has found a way to the surface, or is on its way there. However, until more information comes in from underwater cameras we won’t know for certain. In the meantime, keep watching. (opinion of vulcanologist Tom Pering) 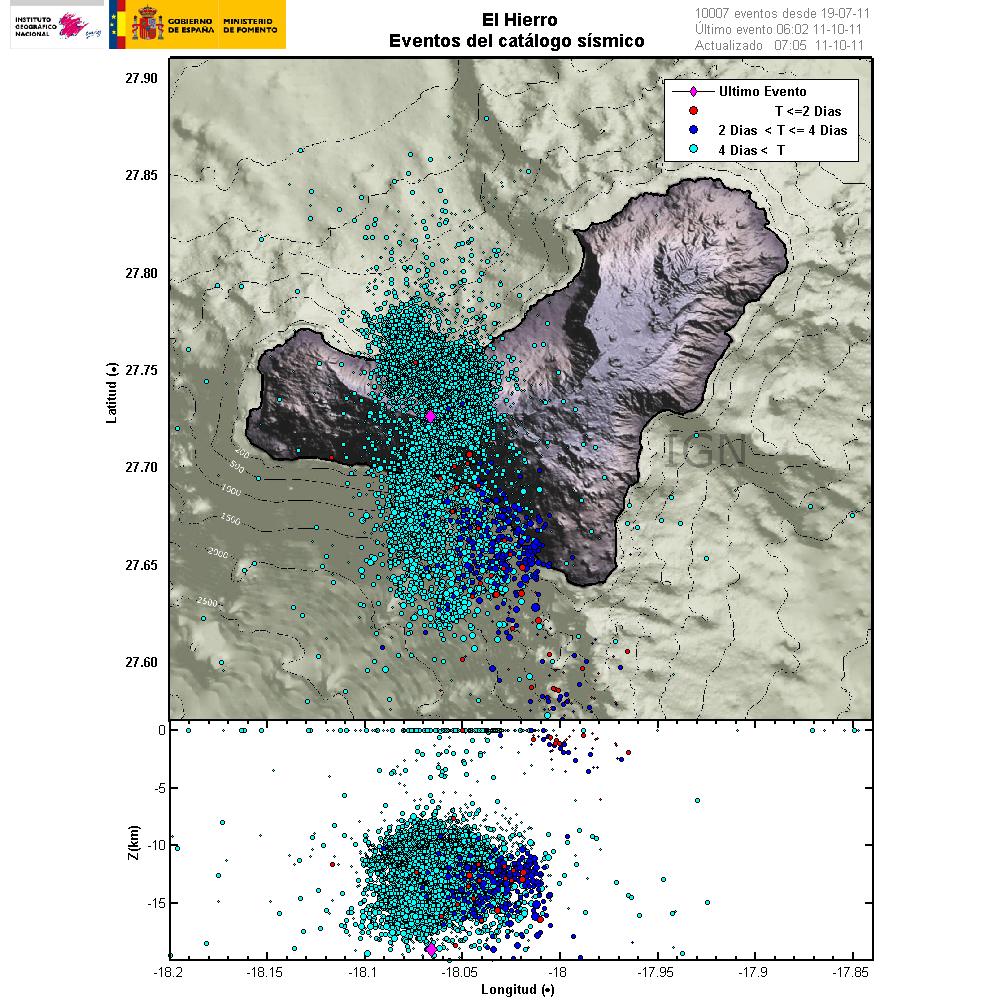 Under the Canary Islands lies an area of magma which is able to break through to the surface when the African Plate – on which the islands sit – shifts. It is to this that the islands owe their very existence. Most of the islands are still volcanically active and there has been speculation that a smaller, previously undetected fault line also runs through the chain.

El Hierro – which means ‘iron’ in Spanish – was formed after three volcanic eruptions 100 million years ago and is topped by a volcano more than 6,000ft high. Some 50,000 years ago, massive landslides triggered by earthquakes caused a large part of the island to crack off and fall into the Atlantic Ocean. That created the El Golfo valley on the island and caused an 300ft-high tsunami that probably reached the American coast.

This feeds into the belief that volcanic activity on La Palma – the most tectonically active of the Canary Islands – could trigger a mega-tsunami. The theory, which has never been confirmed, claims that a possible fault line through the island would cause a major landslide under certain circumstances. That landslide would then spark a tsunami that would cause extensive damage all down the Atlantic Coast of the U.S., the Caribbean, Western Europe, West Africa and the east coast of South America.