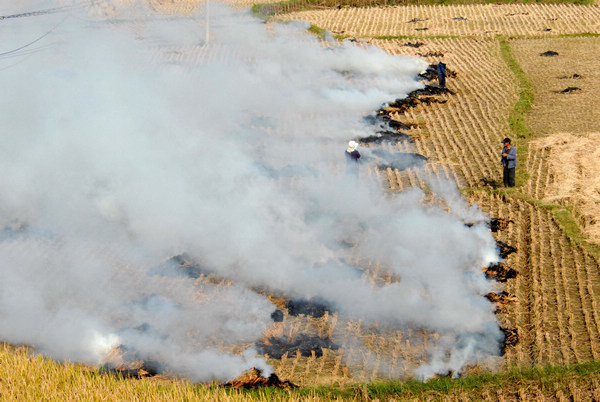 The fog, which occurred about three days ago, covered large areas of the fertile and densely populated North China Plain. On Sunday in the provincial capital of Zhengzhou, a heavy mist caused 52 flights to be cancelled and 42 to be delayed. A major highway running north-south through the province was blocked for two hours due to poor visibility, Henan Business Daily reported. The fog also doubled the number of patients with respiratory problems at the No 3 hospital affiliated with Zhengzhou University.
” >

Authorities warn that illegal burning of straw should be severely punished. Such behavior severely pollutes the air and harms people’s health. Farmers in the province have been burning straw in recent years as an easy way to dispose of agricultural waste. The practice also occurs in other provinces such as Shandong, Anhui and Guizhou, especially in the autumn harvest season.

Hiring a grating machine would cost more than 450 yuan ($70) a hectare, which is too expensive for many farmers. During harvest time there were many people visiting villages in cars with loudspeakers telling them that it was illegal to burn straw.”But they just said violators will be fined 500 yuan and be detained for 15 days. They didn’t explain to us why we can’t do it.”

Lu Bu, a researcher in agricultural resources and regional planning at the Chinese Academy of Agricultural Sciences, said farmers burn straw because recycling agriculture waste requires extra manpower and money. Lu suggested that local governments should offer subsidies to enterprises that produce organic fertilizers to encourage them to collect straw from farmers for batch treatment.

Burning straw also poses dangers to farmers. A woman in her 60s in Shangshui county choked to death on Sunday after she inhaled too much smoke while burning straw in a field. In Xinyang, the government encouraged the public to report any illegal burning of straw. (ChinaDaily)