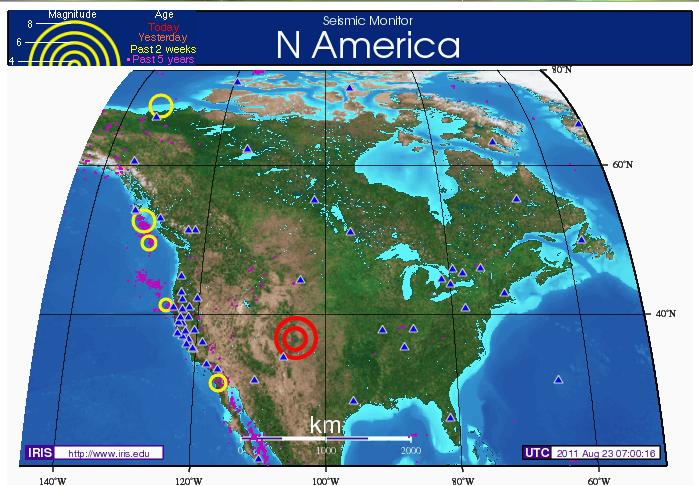 The largest earthquake to strike Colorado in almost 40 years has shaken hundreds of people near the New Mexico border.

The magnitude 5.5 (later downgraded to 5.3) earthquake was recorded at 05:46 UTC on August 23, 2011, 15 km (9 miles) WSW of Trinidad, Colorado and 290 km (180 miles) S of Denver, Colorado, according to the National Earthquake Information Center in Golden, Colorado and the US Geological Survey.

The quake followed two smaller ones that hit the area earlier in the day. It hit at a depth of 4 km (2.5 miles). 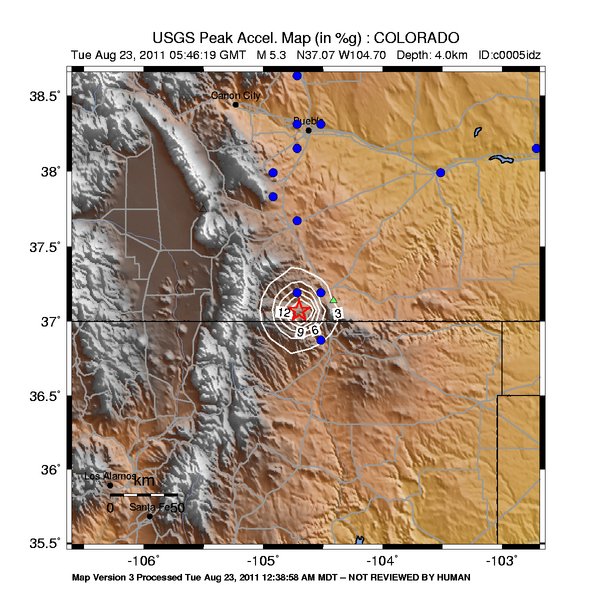 ABC News is reporting about few homes have been damaged and deputies were investigating reports of rockslides along a highway according to Las Animas County Sheriff's Office dispatcher. The USGS center had received calls from more than 70 people in Trinidad and several dozen people in New Mexico who felt the shaking. More than 30 people in Colorado Springs, about 130 miles north of Trinidad, also reported feeling the quake. 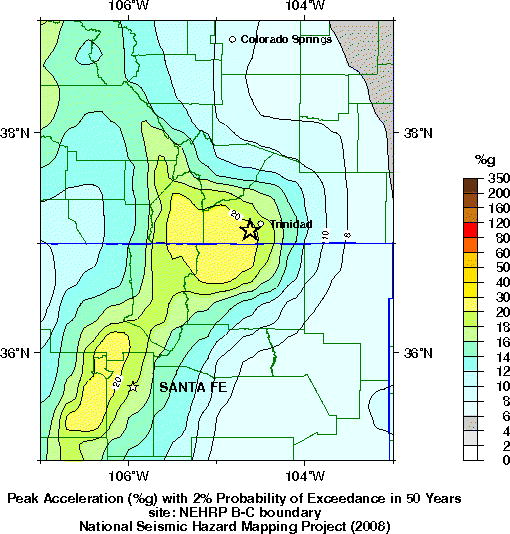 A magnitude 4.6 quake was felt in the same area at 5:30 p.m. (local time) on Monday, and a magnitude 2.9 quake was recorded just before 8 a.m. The last time the area received such a series of earthquakes was in August and September 2001, when about a dozen smaller-sized temblors were recorded. 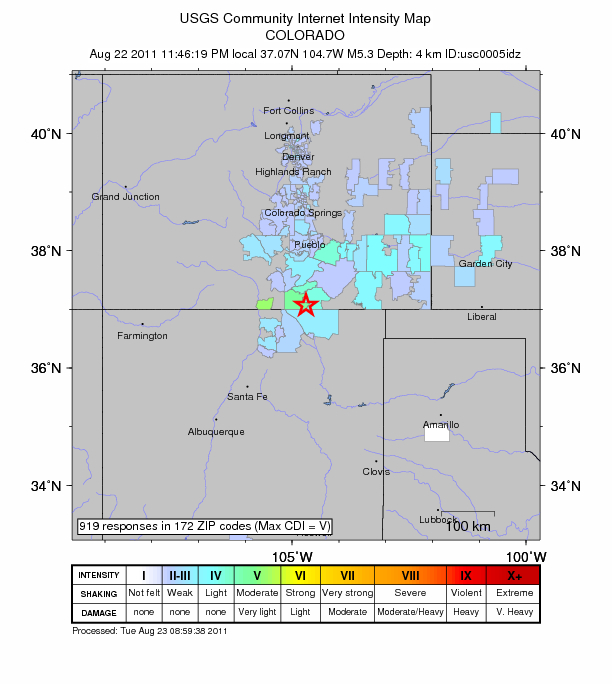 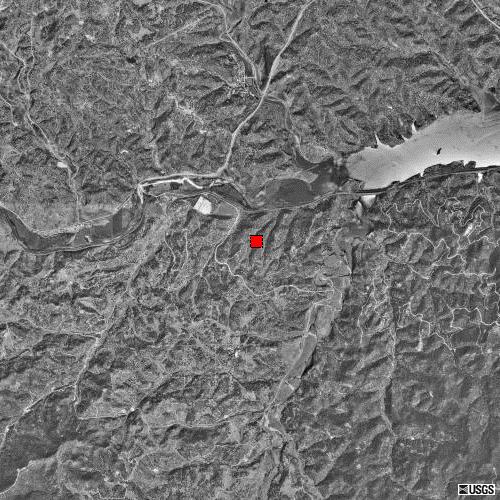 Colorado is considered a region of minor earthquake activity, although there are many uncertainties because of the very short time period for which historical data is available. The northwestern and southwestern corners, and the Sangre de Cristo Mountains in the south-central section of the State, have had no activity in historic times. Eastern Colorado is nearly aseismic, with just a few epicenters in the Arkansas and Platte River Valleys. Most shocks in the history of this State have centered west of the Rocky Mountain Front Range.

A widely felt magnitude 4.6 earthquake occurred on October 2, 1966, and was felt over a 38,400 km2 (15,000 mi2) area that extended south to Roy, New Mexico, east to Two Buttes, Colorado, north to Pueblo, Colorado, and west to the Weston and Stonewall, Colorado.  The published location for this event, which is just northeast of Trinidad, has an uncertainty of ±10 km (±6 mi).  However, detailed analysis of this event precludes its epicentral location and, consequently, its source area to be anywhere else except in the region northeast of Trinidad (J. Dewey, pers. commun., 2001). Therefore, this event is not associated with the current seismicity.

In September 1973, a swarm of six earthquakes occurred in a period of five days and was felt in and around Segundo.  The two largest events had magnitudes of 3.1 and 4.2.  The published locations of these two earthquakes are directly northwest of Trinidad Lake but their exact locations are uncertain by at least ±10 km (±6 mi).  Considering the location uncertainty and the felt report information, this historical earthquake swarm could have originated from the same source area as the current earthquake swarm. (USGS) 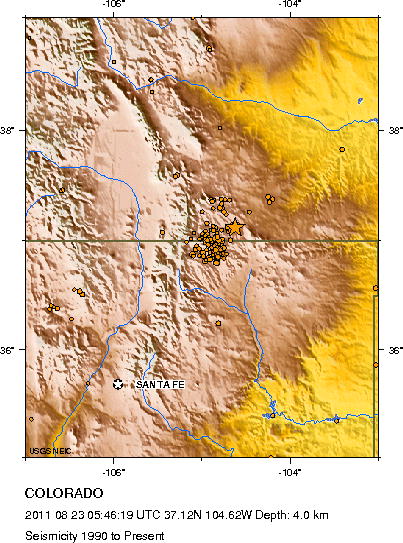 The region west of Trinidad lies within the Raton basin, which contains a thick section of Cretaceous and Tertiary sedimentary rocks composed of sandstone, siltstone, and shale.  Contained within these sedimentary rocks are numerous coal beds that have high concentrations of methane gas.  To the Northwest are the peaks of Spanish Peaks, which were formed by Tertiary volcanic and intrusive rocks.  These mountains, along with large intrusive dikes that cross the Raton basin, are evidence of the geologic dynamics that have occurred in this area in the past. (USGS) 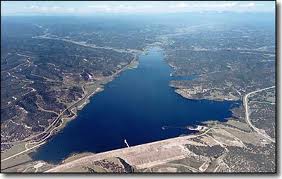 Man-made reservoirs can potentially induce earthquakes due to reservoir loading after impoundment.  Reservoir-induced seismicity has been long recognized and studied extensively.

Trinidad Lake, which is located near the earthquake swarm, was designed and constructed by the U.S. Army Corps of Engineers in the 1970s and completed in 1979.  Considering that the 1966 and 1973 earthquake activity occurred before Trinidad Lake impoundment, that the reservoir is significantly shallower than the depth of reservoirs that have induced seismicity elsewhere, and that the current seismic activity occurred 22 years after impoundment, the likelihood that the current swarm of earthquakes is directly related to reservoir-induced seismicity is very small.  However, the design of any dam does include the assessment of the potential seismic ground motions expected, and the Trinidad Lake dam is no exception. (U.S. Army Corps of Engineers)

Investigation of an earthquake swarm near Trinidad, Colorado August-October 2001. (USGS)

“In recent years, the area west of Trinidad has become the focus of extensive drilling for the production of coal-bed methane. Water from the coal-bed methane production is returned to the subsurface in disposal wells, and local citizens and officials in the Trinidad area expressed concern that the earthquakes might be somehow related to this fluid disposal. Previous cases of subsurface fluid disposal causing earthquakes have been reported elsewhere in Colorado.” (USGS)

The process of coal-bed methane gas extraction results in the production of large amounts of excess water.  The Colorado Oil and Gas Conservation Commission’s (COGCC) rules and regulations require that some of the excess water be returned to the subsurface in disposal wells, and 10 fluid disposal wells are presently operating in the earthquake-monitored area (Figure 9).  The first fluid disposal well began operating in mid-1988 and the latest well began September 4, 2001.  All wells are disposing of the water at various flow rates at depths of 1.5 – 2.1 km (4,000 – 7,000 ft).  At all sites but two the water is freely accepted by the target geologic formation.  No other external pressure is applied except for the hydrostatic pressure of the water column itself in the borehole, so no pumping is necessary.  Both sites where external pressure is applied are located in the west-southwestern part of the earthquake-monitored area near station BH0. 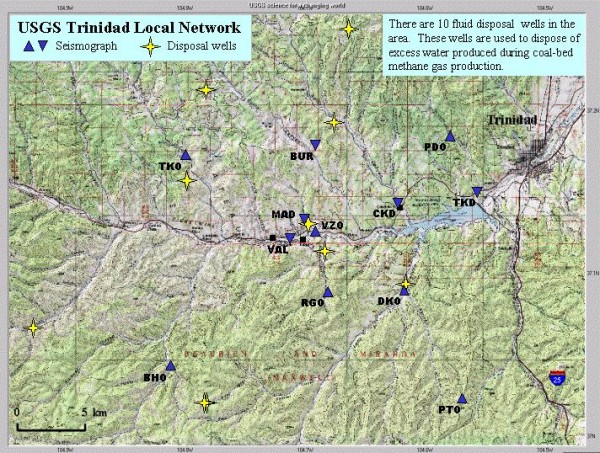 Most of the other fluid disposal wells were also drilled into the Dakota except for the two wells injecting under pressure described above.  The target formations of these two wells for fluid disposal are the Entrada, Dockum, and Glorietta (COGCC, writ. commun., 2001), which lie below the Dakota.  Note that the formations described in Figure 10 occur at various burial depths throughout the Raton basin and therefore, occur at different depths in different wells.

The surface geology of the earthquake-monitored area comprises sedimentary rocks of sandstone, siltstone, and shale of the Raton Formation.  All seismograph stations are sited on rocks of this type except for stations VAL, TKD, and DK0.  These three stations are sited in the wide valleys of Picketwire Valley (VAL and CKD) and Long Canyon (DK0).  The thickness of the unconsolidated material on which they are sited is unknown.

Let's not forget one thing; La Garita Caldera is a large volcanic caldera located in the San Juan volcanic field in the San Juan Mountains near the town of Creede in southwestern Colorado, United States. It lies to the west of the town of La Garita, Colorado. The eruption that created the La Garita Caldera is often described as the largest known explosive eruption in Earth's history, although recent research has identified several larger ones.