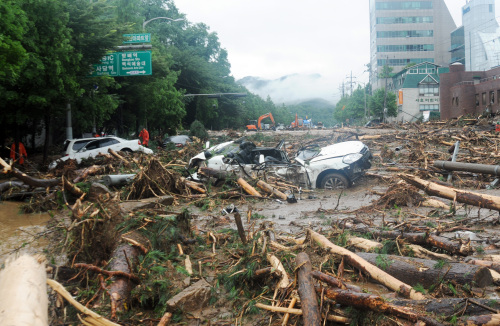 The heaviest downpour in a century devastated the country’s central regions  triggering multiple landslides and floods that killed at least 38 people and left 8 others missing. Flood waters inundated main roads, residential areas and basement facilities in and around Seoul, cutting the power supply at 14,000 homes and leaving thousands of vehicles submerged on flooded roads. 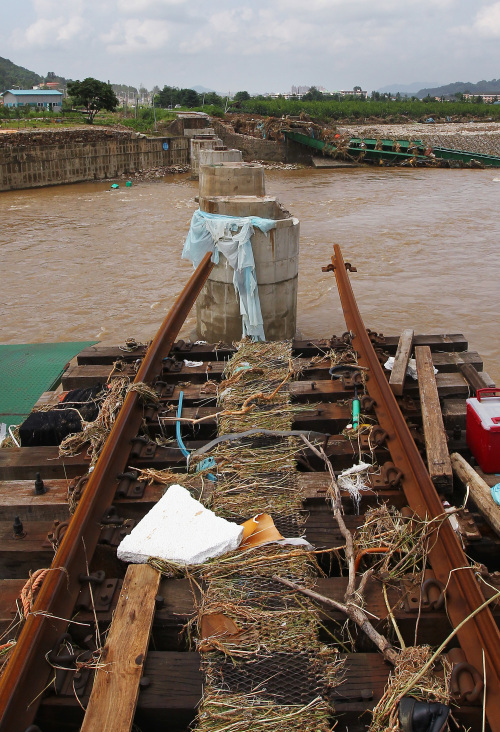 Seventeen residents were killed in the wreckage from landslides that occurred at hillside villages on Mt. Umyeon in Seocho, southern Seoul. Some 400 residents were ordered to evacuate their apartments in the posh mountainside village near the southern tip of the capital. In Gwangju, Gyeonggi Province, at least six residents in a village near Gongiam Stream were killed and several others went missing after the stream overflowed its banks and submerged the village Wednesday afternoon. 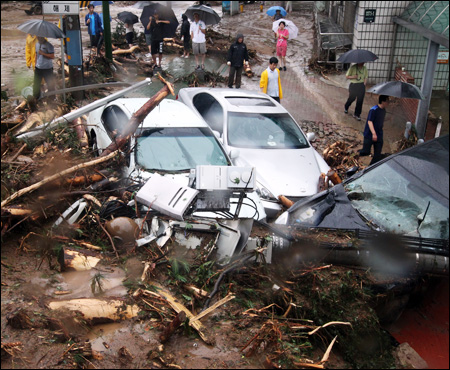 Separately, earlier in the day in Chuncheon, about 100 kilometers northeast of Seoul, a massive landslide destroyed five residential buildings near the Soyang River Dam just after midnight, killing 11 university students and two other people. Some 90 residents in the area were evacuated from their homes after officials warned of further landslides.

The Korea Meteorological Administration (KMA) said more than 110 millimeters of rains per hour, a record volume witnessed once or twice in a century, were recorded in the country’s central regions, including the Seoul metropolitan area. The precipitation recorded in Seoul for two days exceeded 400 mm, the agency said, adding that more than 250 mm of rainfall is expected in the capital area through Friday.  Though the nation received 700 millimeters of rain this week, the agency had made a humble forecast of 50 to 150 milliliters, assuring commuters of traffic as usual in Seoul and its adjacent regions on Wednesday and Thursday. But heavy rains flooded many sections of main roads, causing traffic confusion and damaging countless cars.  All the 12 riverside parks along the Han River were closed to the public.

Many public buildings and schools were also closed. EBS suspended broadcasting services after one of its power facilities in Seocho suffered damage from a landslide.  (KoreaTimes)

To get a better view of seriousness of the catastrophe we compiled a few videoclips: