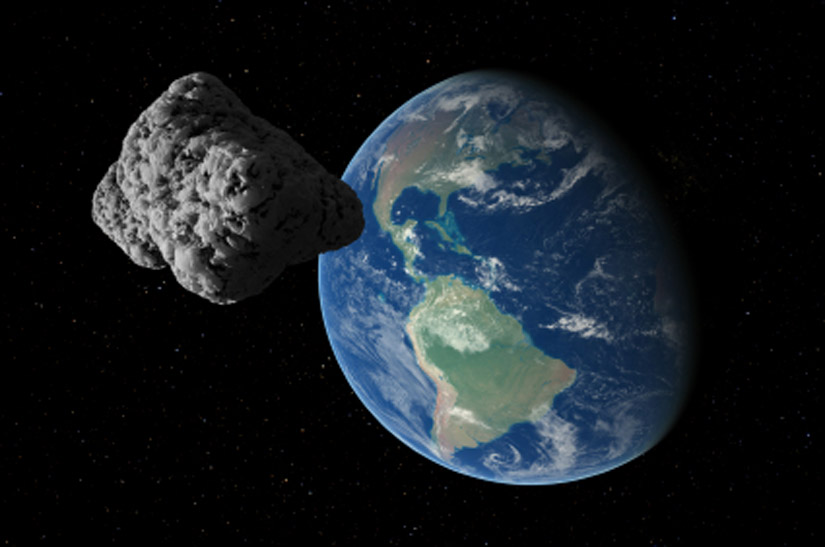 Newly-discovered asteroid 2011 MD will pass only 12,000 kilometers (7,500 miles) above Earth’s surface on Monday June 27 at about 1:00 p.m. EDT (1700 UT). NASA analysts say there is no chance the space rock will strike Earth. Nevertheless, the encounter is so close that Earth’s gravity will sharply alter the asteroid’s trajectory. (SpaceWeather)

The asteroid 2011 MD, about 10 meters in diameter, will fly by the earth today –  Jun 27. These animations showing the geometry of this encounter. It is interesting to note that it will come closer than the GPS satellites, and also that it comes from the norther hemisphere, passes over the Earth’s south pole, and then is deflected so strongly that leaves the Earth back in the northern hemisphere.

The first animation shows the passage of the asteroid from an observer far away, on the same plane of the Earth’s orbit (while line left of the Earth). The Sun is to the left. The asteroid 2011 MD comes in from the top right corner (night side of the Earth), approaches the Earth at its minimum close to the south pole, and then leaves on the Earth’s day side. Note how the orbit of the asteroid is perturbed by the Earth, so much to turn it around and send the asteroid almost back to where it comes from. (Tricarico-Orbit.psi.edu)

The next two animations include the GPS constellation. First from a fixed observer. The second animation shows the same event, but from the point of view of the asteroid.

The second animation shows the same event, but from the point of view of the asteroid.