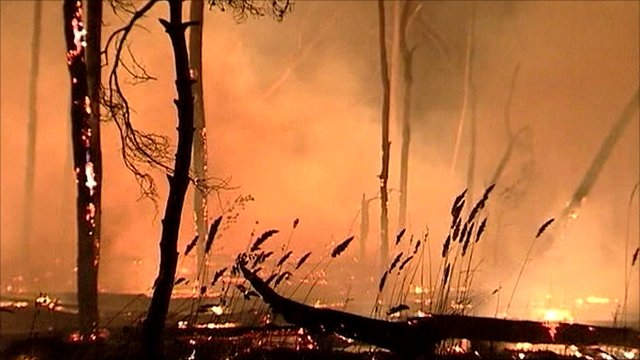 140 hotbeds of wildfires with the total area 13 906.28 hectares have been registered in the Russian Federation within twenty four hours. 139 hotbeds with th area 4 832.88 ha have been extinguished. 167 hotbeds, including those emerged earlier and 16 large ones continue burning, the area of active burning is 200.67 ha, 26 995.93 ha have been contained.

Within the past twenty four hours 139 hotbeds of wildfires with the total area of 4 832.88 hectares were extinguished.

There are 23 uncontrolled agricultural undergrowth burnings and 19 hotbeds of waste burning on the territory of the Russian Federation.

10 355 hotbeds of wildfires on the total area of 439 464,18 hectares have emerged in the Russian Federation since the beginning of the fire-dangerous period of 2011.

Compared to the previous twenty four hours there is an increase  of areas in fire (by 9 073.4 ha) and an increase in the number of active hotbeds (by 1 hotbed).

The most difficult situation with fires is developing on the territory of Sakha (Yakutia) Republic, Krasnoyarsk and Khabarovsk Territories, Irkutsk Region and Khanty-Mansi Autonomous District (the reasons are very warm weather, territories difficult to access).

Given the forecast, the most difficult situation may develop in the Far Eastern, Siberian, Urals, Northwestern and Central Federal Districts: in Sakha  (Yakutia) and Altai Republics; Khabarovsk, Altai and Zabaikalsky Territories;  Chelyabinsk, Orenburg, Saratov and Moscow Regions. (EMERCOM) 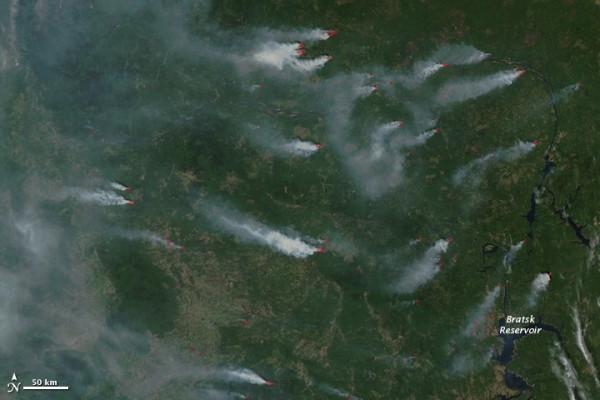 Several large, smoky fires burned in the forests of southeastern Russia when the Moderate Resolution Imaging Spectroradiometer (MODIS) on NASA’s Aqua satellite acquired this image. The fires are marked in red.

The two regions were among the areas that posed the greatest challenge to firefighters in early June because of the difficult, remote terrain and warm, fire-friendly weather. So far in 2011, 425,186.16 hectares of land have burned, compared to 187,391.39 hectares for the same period in 2010. (EO)