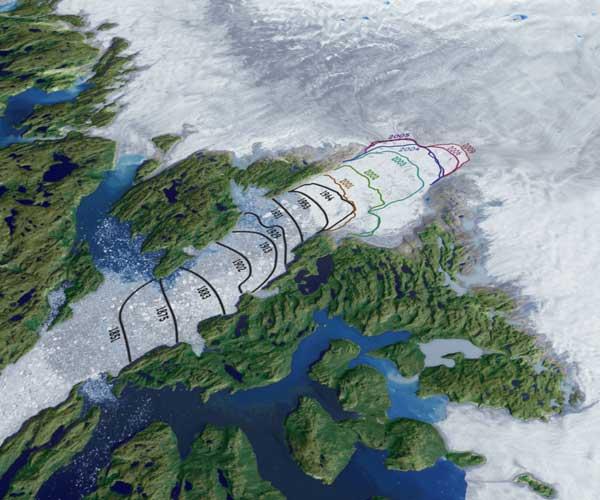 In the last decade, two of the three largest glaciers in Greenland have lost enough ice that, if melted, could have filled Lake Erie.

This startling picture of Greenland’s ice loss comes from a new study that refines measurements of such ice loss and is providing a “high-definition picture” of climate-caused changes on the frozen island. The three largest glaciers — Helheim, Kangerdlugssuaq and Jakobshavn Isbrae — are responsible for as much as one-fifth of the ice flowing out from Greenland into the ocean. Jakobshavn alone drains somewhere between 15 and 20 percent of all the ice flowing outward from inland to the sea.

As the second-largest holder of ice on the planet, and the site of hundreds of glaciers, Greenland is a natural laboratory for studying how climate change has affected these ice fields. Researchers focus on the “mass balance” of glaciers, the rate of new ice being formed as snow falls versus the flow of ice out into the sea. The new study suggests that, in the last decade, Jakobshavn Isbrae has lost enough ice to equal 11 years’ worth of normal snow accumulation, approximately 300 gigatons (300 billion tons) of ice.

Kangerdlugssuaq would have to stop flowing and accumulate snowfall for seven years to regain the ice it has lost. Surprisingly, the researchers found that the third glacier, Helheim, had actually gained a small amount of mass over the same period. It gained approximately one-fifteenth of what Jakobshavn had lost.

The research hasn’t only given an estimate of ice melt, it also shows that the methods the team used will provide scientists a more accurate idea of exactly how much ice is being lost. These glaciers change pretty quickly. They speed up and then slow down. There’s a pulsing in the flow of ice. There’s variability, a seasonal cycle and lots of different changes in the rate that ice is flowing through these glaciers.

Past estimates were more like snapshots of mass loss. The team from Byrd Polar Research Center at Ohio State University got their longer-term view by using data sets provided by at least seven orbiting satellites and airplanes, as well as other sources.

Researchers  need different tools and each one of these satellites plays an important role and adds more information. The next step is to look at the next-largest glaciers in Greenland and work their way down through smaller and smaller ice flows.

Currently, the missing piece is ice thickness data for all of the glaciers, but a NASA aircraft is up there getting it. When that’s available, researchers will be able to apply this technique to the entire Greenland ice sheet and get a monthly total mass balance for the last 10 years or so. (OurAmazingPlanet)