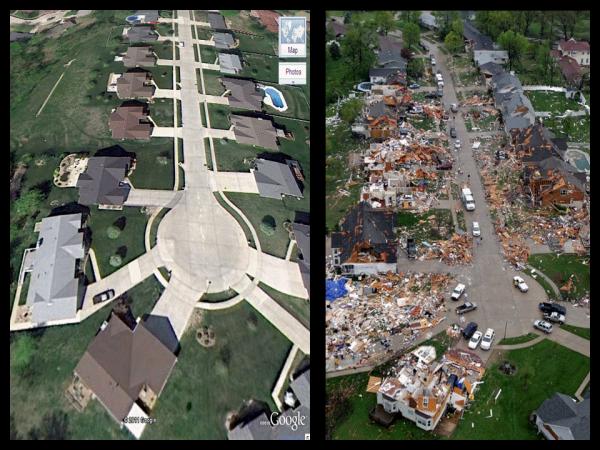 Good Friday saw the year’s strongest tornado yet pound St. Louis, flattening houses and shredding the roof of a crowded airport terminal on its 35 kilometers path (22-mile) along the ground.


Shattered glass injured several people at Lambert-St. Louis International Airport April 22, but no one was reported killed. The tornado rated the second-highest level on the Enhanced-Fujita tornado damage scale, EF-4, a first for this year’s tornado season. The twister, with 322 kilometers per hourvwinds (200 mph), was the strongest in Missouri’s St. Louis County in 44 years. It was the latest exhibition of wild tornado weather this April, including triplet tornadoes and record numbers of outbreaks.

The Weather Channel has reported the confirmation of 292 tornadoes so far this month, besting the previous April record of 267 in 1974. The average for April is only 116, according to the Storm Prediction Center in Norman, Oklahoma. Along with amazing videos of twin and even triplet tornadoes have come new tornado records in several states.

Comparing the number of tornadoes from year to year isn’t an exact comparison. There seems to be an increase in the number of tornadoes since recording began in the 1950s, but the Storm Prediction Center says that upward trend is mostly due to more people reporting tornadoes, or more buildings being hit as the country’s population grows and its cities and towns expand. Storm survey teams continue to assess the damage from this month’s storms, and the tornado counts could change.

Remarkably, no one was killed Friday by the invisible, rain-wrapped tornado near St. Louis, and an expert credits advanced warnings. In most cases, people had more than 30 minutes notice that the tornado and a smaller one were coming, enough time to gather the kids and seek safe shelter.

Tornadoes have killed 41 people so far in 2011, only four fewer than the death toll for all of last year. More than half of this year’s fatalities were people in mobile homes. North Carolina has suffered the most this year, with 26 deaths. That’s the deadliest outbreak since the “Super Tuesday” storms in February 2008, when 57 people died in Dixie Alley, the southeastern extension of Tornado Alley.

In 2008, during a season among the all-time highest for number of tornadoes, 126 people were killed. (OurAmazingPlanet)

April 2011 has been a horrific month for severe weather so far with more than 550 reports of tornadoes, at least 39 tornado-related deaths and unthinkable destruction. As the wild weather pattern continues this week, the month’s total number of tornadoes will continue to rise. There is a good chance that April 2011 will end up being the most active April on record for tornadoes. With May and June typically being the most active months of the year for severe weather, people are wondering if the trend will continue and make 2011 a record-setting year.

The total number of tornado reports this month (through Friday) was up to 559, according to the Storm Prediction Center (SPC). At least 15 more reports of twisters were submitted thereafter over the weekend.
It’s important to note that these are the number of reports (or sightings), not confirmed tornadoes. Oftentimes multiple sightings of the same tornado are reported, and it will take quite some time until all the data is sorted through and the number of confirmed tornadoes is determined. According to the SPC, the highest number of confirmed tornadoes recorded in the month of April (since 1950) was 267 in 1974.

If all of the tornado reports so far this month were confirmed, April 2011 would by far be the most active April for tornadoes. Even though the number of confirmed tornadoes will probably end up being quite a bit smaller, this month is still likely to beat the record. The preliminary estimate for number of tornadoes so far in 2011 was 766, as of Sunday, with about two dozen states affected. More than 100 tornadoes have been reported in both Alabama and North Carolina.

The year that holds the record for the highest number of tornadoes is 2004 with a whopping 1,817 twisters. For people wondering if 2011 could set a new record, this year has a long way to go. Since May and June are typically the most active months of the year for severe weather, it may seem that 2011 could have a shot at setting a record following such an extreme April. However, AccuWeather.com Expert Senior Meteorologist Ken Reeves pointed out a trend that may suggest otherwise. (AccuWeather)