Mud eruption in Ninh Thuan is defined as volcano mud

A mud eruption in the central province of Ninh Thuan is a normal geothermal phenomenon and is not dangerous, but a senior expert noted that the area is cursed with weak soil.

Dr. Dinh Doan Lam, a senior official from the Institute for Geology of Vietnam, said that mud eruption in Ninh Thuan is not dangerous. Mud volcano or mud dome are used to refer to formations created by geo-excreted liquids and gases, although there are several different processes which may cause such activity. Hot water mixes with mud and surface deposits. Mud volcanoes are associated with subduction zones. Temperatures are much cooler in these processes than at igneous volcanoes. 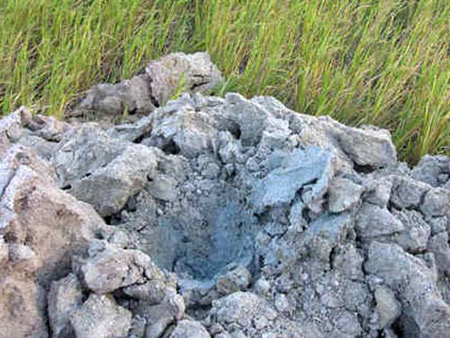 About 86 percent of the gas released from these structures is methane, with much less carbon dioxide and nitrogen emitted. Ejected materials are often a slurry of fine solids suspended in liquids which may include water, which is frequently acidic or salty, and hydrocarbon fluids.
Mud volcanoes are not dangerous and they can be used to serve humans, for example mud bath services. However, Lam suggested research of the mud contents before use.
However, the scientist noted that the area where the mud volcanoes are may have weak soil.