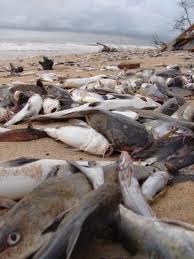 The National Environmental Management Authority (Nema), Public Health Ministry and Kenya Wildlife Service are investigating the deaths of fish in Mara River. Conservationists suspect the deaths that started last week might have been caused by agro chemicals from farms, that drain into the river. Hoteliers in Masai Mara Game Reserve are now expressing fear that the chemicals might kill animals that depend on the river.

“The deaths could have been caused by agro chemicals from large scale farms on the upper side of the river. The chemicals might also kill hippos, crocodiles and other animals that drink water from the river,” said Ben Kipeno, a conservationist from the northern side of the reserve.

Mr Kipeno said on Wednesday there were unconfirmed reports that apart from fish, a crocodile and a hippo have already succumbed to effects of the chemicals. He urged the Government to rein in farmers along the river who use potent chemicals and claimed that despite several complaints to Nema no action has been taken. Officials from KWS who were dispatched from Nairobi took samples of the fish to the Government Chemist for further tests to ascertain the cause of the deaths.

When The Standard visited the river, dead fish were floating with scavengers, including the Marabou stork, feeding on them. The Narok South Nema officer in charge Gabriel Tambushi said initial reports had indicated that more than five million fish were killed at the confluence of the seasonal Moyan River in Transmara with the Mara following a heavy flood.

“The sudden change of weather that resulted into heavy mist covering the water surface, inhibiting fish and other animals that depend on the river from breathing might have been the cause of the deaths,” said Tambushi. He did not rule out poisonous agro chemicals from farms, which depended on Mara River for irrigation. (Science News-Marine Biology International)

Recommended reading: Life zapped out of Mara @ The Mara Triangle