A large storm will impact the Eastern half of the U.S. today, February 22, 2022, with snow/ice in the Upper Mississippi Valley and Great Lakes into northern New England and heavy rain/severe storms from the Lower Mississippi Valley to the Ohio and Tennessee Valleys. A second storm is digging into southern California and the Southwest today. This storm will impact the Eastern two-thirds of the U.S starting Wednesday, the National Weather Service (NWS) warns.

A strong wave of low pressure over the Middle Mississippi Valley will move northeastward to Eastern Canada, while the associated front moves off the Northeast and Mid-Atlantic Coast by Wednesday evening, February 23. The storm will produce a significant winter storm impacting areas of the Great Lakes to Northern New England, NWS forecaster Ziegenfelder noted.

Periods of moderate to heavy snow will continue today across Minnesota, Wisconsin, and Michigan. Additional snowfall may exceed 15 cm (6 inches), bringing event-total snowfall to 30 – 60 cm (1 – 2 feet) in some areas.

Moderate to heavy snow combined with strong winds gusting over 50 km/h (30 mph) will create near blizzard conditions at times with considerable blowing and drifting snow, making travel so difficult it's discouraged.

Periods of sleet and freezing rain will lift across Wisconsin and Michigan through Tuesday evening.

Significant ice accumulation exceeding 6 mm (0.25 inches) are possible, which will create hazardous travel and isolated power outages. Very cold air is expected for much of this week, with temperatures near record low values and dangerously cold wind chills in the Plains. From Tuesday afternoon into late Tuesday night, sleet and rain/freezing rain will develop over parts of Northern New England.

Moreover, temperatures will be 10 – 25 °C (20 – 45 °F) below average over the Northern Rockies/Northern High Plains into the Northern/Central Plains and parts of the Upper Mississippi Valley. As a result, several locations will have record-breaking or tied low temperatures. 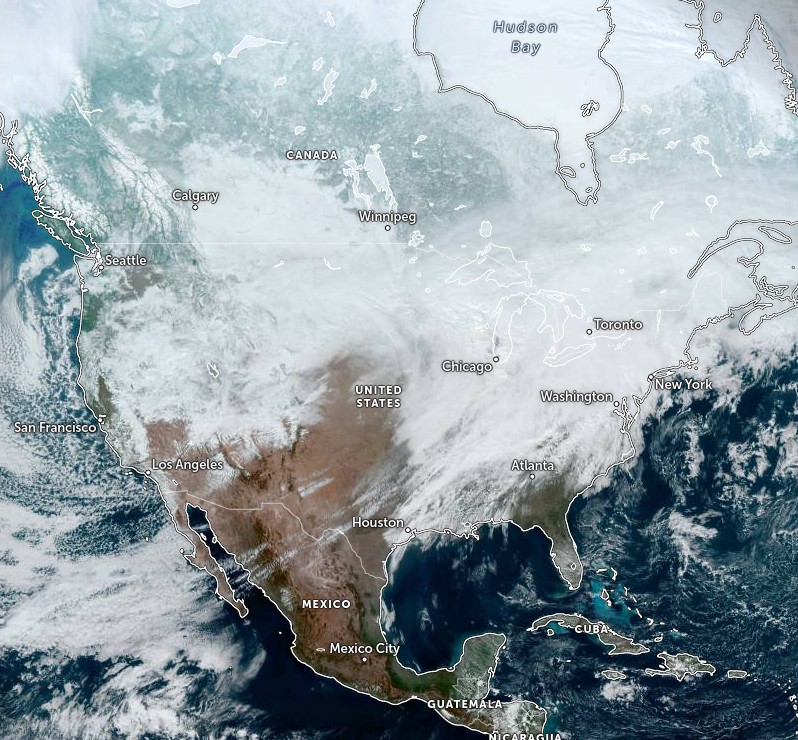 In contrast, temperatures will be 5 – 14 °C (10 to 25 °F) above average over most of the East Coast, with several locations having record-breaking or tied high temperatures from Tuesday into Wednesday morning.

Meanwhile, as the cold front moves eastward over the Middle/Lower Mississippi Valley into the Ohio/Tennessee Valleys, moisture will pool along ahead of the boundary aiding in the development of showers and thunderstorms; some thunderstorms will be severe.

In addition, there is a threat of excessive rainfall associated with these thunderstorms. Therefore, the WPC has issued a Moderate Risk of excessive rainfall over parts of the Ohio Valley with a second over parts of the Tennessee Valley. The associated heavy rain will create numerous areas of flash flooding. Furthermore, many streams may flood, potentially affecting larger rivers through Wednesday morning. 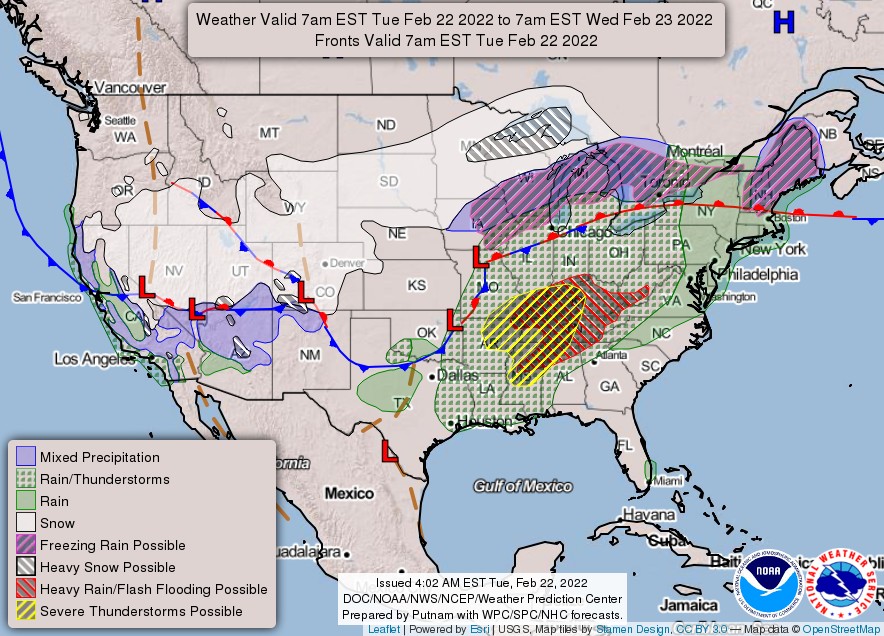 In the meantime, an upper-level low over the Pacific Northwest moves southward to the Great Basin/Southern California by Wednesday morning, then moves eastward to the Southern Rockies by Thursday, February 24. The system will produce rain and higher elevation snow over parts of the Northwest and Northern/Central California, with snow over parts of the Great Basin on Tuesday.

Freezing rain and sleet are forecast to expand over the Southern Plains and Middle Mississippi Valley starting Wednesday and continue into the Ohio Valley Thursday.

As a result, hazardous travel conditions and impacts to infrastructure are becoming more likely. Details in the track and timing of the storm and precipitation type and amounts remain uncertain but will be refined in the next day or so.