A powerful autumn storm named Aurore by Meteo France brought severe weather to France, Germany, Netherlands, Belgium, Czech Republic, Poland, the Channel Islands, and parts of southern England on Wednesday, October 20, and Thursday, October 21, 2021. This is the year's first violent autumn storm in Europe. In Germany, this storm is known as Ignatz.

Aurore started affecting Brittany, France on Wednesday afternoon and continued eastward through the night with wind gusts up to 175 km/h (109 mph). It downed thousands of trees and damaged many homes.

According to French Enedis utility, more than 250 000 homes were left without power as of Thursday morning, October 21.1 More than 40 000 were still without power by Thursday evening.

A large number of rail services were disrupted by uprooted trees in France, Germany, the Netherlands, and neighboring countries as well as in England.

Four people were killed in Poland's Lower Silesia region. One person died when a van was blown off the road while a builder died after a wall collapsed. In the western Polish city of Wroclaw, two people died when a tree crashed onto their car.2

The hardest-hit region in Belgium was around Antwerp, where countless trees were snapped, spilling scaffolding onto the streets and blowing some trucks off roads. It also tore off part of the roof of Antwerp FC's stadium.1

Four people were injured in the Dutch town of Barendrecht, on the southern edge of Rotterdam, as strong gusts ripped tiles off roofs and uprooted trees in a residential neighborhood in the early hours of the morning. 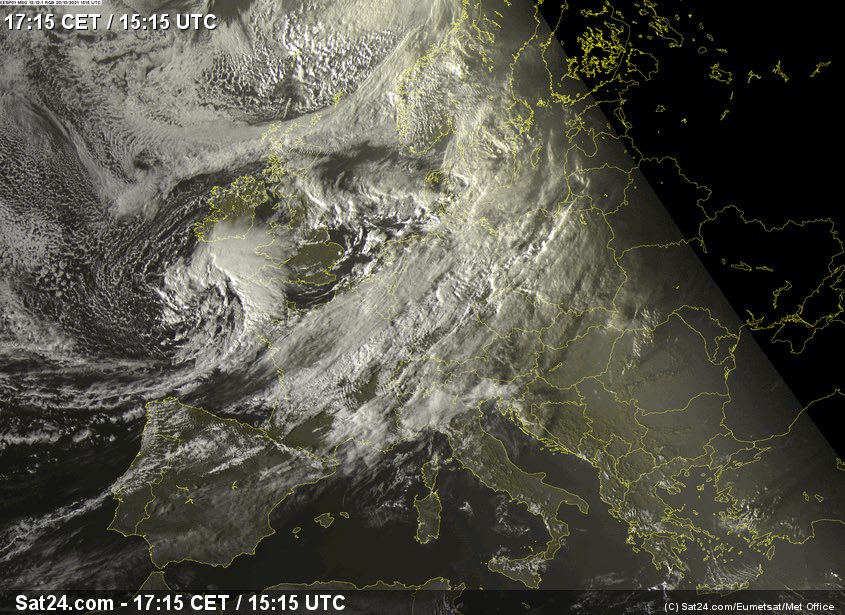 Some 50 000 homes were left without power in eastern Germany, mainly in Saxony, Saxony-Anhalt, and Thuringia.

A damaging tornado hit Schwentinental, a town near the German Baltic Sea port city of Kiel, early Thursday. Fire service official Kai Laessig told German news agency DPA that it destroyed greenhouses and brought down trees, which hit cars, but no one was injured. Several houses were damaged.1

In Germany's northwestern city of Delmenhorst, a man was slightly injured after a falling branch hit him on Wednesday evening. In Bad Godesberg, a suburb in the western city of Bonn, a freight train collided with a fallen branch during the night. And in the eastern state of Saxony-Anhalt, a man was seriously injured when a tree crushed his car. The 59-year-old was hospitalized after emergency services workers freed him from his vehicle.2

According to AFP, 270 000 homes were left without power in the Chech Republic.

At Prague airport, passengers on some planes had to stay on board longer than expected because the wind prevented them from safely using the disembarkment steps.

The winds were not so damaging in England, but many of its regions were affected by heavy rains, resulting in floods and mudslides.

West Sussex Fire and Rescue Service said it had received hundreds of calls on Wednesday night, including from people who needed to be rescued from their cars after driving into floodwater.4

Even after Aurore pulled away from England on Thursday, flooding worries continued due to strong northerly wind and astronomical high tides. This forced the closure of the Thames Barrier for the 200th time in its history.5

While windstorms are common across northwest Europe from the late fall into the spring, it is a bit early for a storm of this intensity, according to AccuWeather Meteorologist Tony Zartman.

Météo-France named the storm because of the significant impacts expected in France, the UK Met Office explained.

The French meteorological service is part of a different storm naming group than the Met Office, which means that the next storm named by either Met Eireann, KNMI or the Met Office will still be Storm Arwen, and will be named when more significant impacts are expected in one of those countries.6

The list of named storms runs from early September to late August the following year, coinciding with the start of autumn when the likelihood of low pressure systems and the potential for named storms in this part of the world increases.

Have a look at this amazing view of the air masses in motion over #Europe earlier today: this #trivisWS animation shows #AirMasses images from the #eumetsat meteosat MSG satellite from 00:00 UTC until 14:15 UTC of the 21.10.2021. #Hendrik #StormAurore #storm #StaySafe pic.twitter.com/2X8rlHPtRD