People living in drought-stricken provinces of southern Angola are facing the worst drought since 1981 and an extended hunger season.

According to ECHO, the poor harvests have severely affected the population access to food in this region, which is highly dependent on agriculture and has also adversely affected the nutrition situation.1

As food reserves are depleting, the situation has deteriorated and will likely worsen during the lean season.

Angola is characterized by marked precipitation seasonality and the main issue leading to the current drought is the strongly reduced precipitation during several previous rainy seasons (lasting from November to April). This extremely dry condition occurred also in the most recent rainy season – 2020/21.

Both used indicators (fAPAR and SMA) depict well the vegetation and the soil condition at the end of this rainy season (end of March 2021). This pushes households in these provinces into extreme vulnerability, increased food insecurity, and livelihood losses, ECHO said. 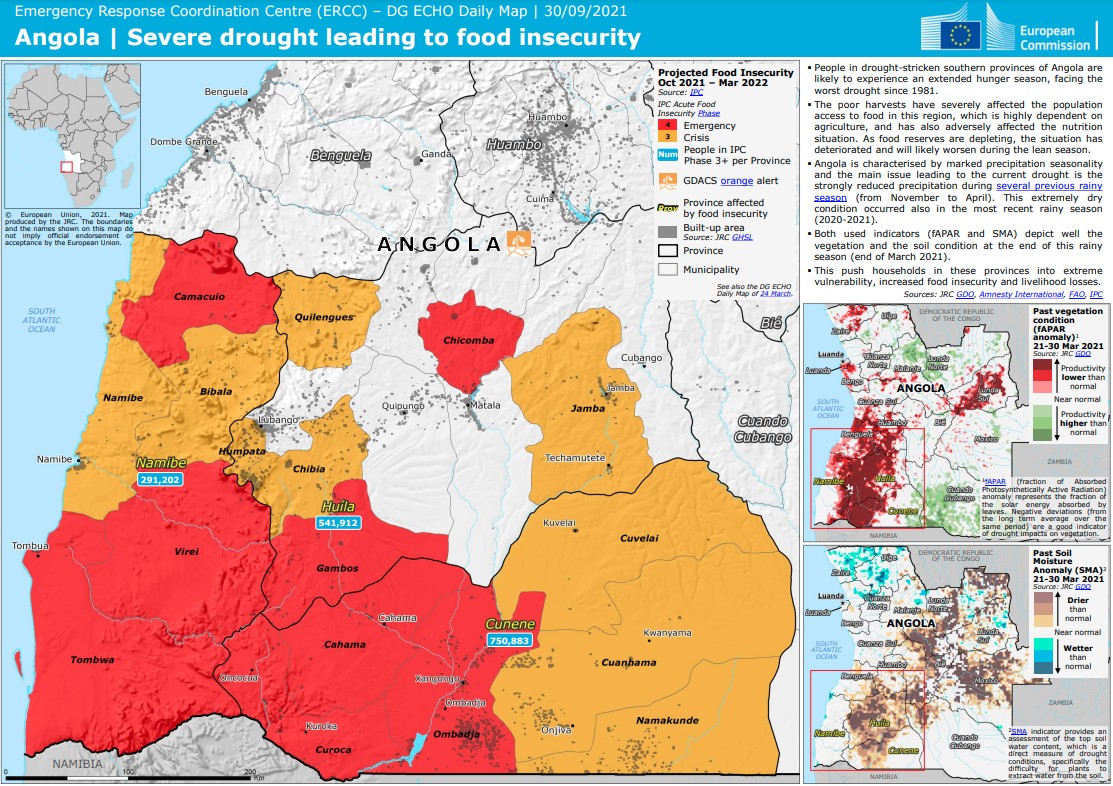 According to a recent Integrated Phase Classification (IPC) analysis, more than 1.3 million people in the south-western provinces of Cunene, Huila and Namibe are facing severe hunger as the worst drought in 40 years leaves fields barren, pasture lands dry and food reserves depleted.2

"Migration of families to other provinces and neighboring Namibia in search of water and grazing for cattle has been registered in the South of the country," said WFP’s Head of Office in Angola, Michele Mussoni.

High food prices and a locust infestation that has caused severe damage to crops are compounding the effects of the drought, hampering people’s ability to access nutritious food, WFP said.

The drought has also impacted 114 000 children under the age of five who are suffering or likely to suffer from acute malnutrition in the next 12 months, with serious effects on their physical and mental development.