The National commissioner in agreement with the Police Department of the North-East Iceland declared the uncertainty level because of the ongoing uplift at Askja volcano. In addition, the Aviation Color Code for the volcano was raised from Green to Yellow. This is done as the volcano is currently showing a level of activity beyond the known background.

In the last weeks, fast deformation changes have been measured in Askja, both from GPS stations and processed satellite images. The uplift has reached about 7 cm (2.7 inches) and that is a significant change over this temporal period, the Icelandic Met Office (IMO) reports.1

In light of the latest data IMO has changed the Aviation Color Code for the volcano from Green to Yellow. This is done as the volcano is currently showing a level of activity beyond the known background.

For Civil Protection, the level of uncertainty means that there is the need for increased monitoring to follow those events that, eventually, might lead to a threat to the health and safety of people, the environment, and infrastructure.

Declaring a level of uncertainty is part of the Civil Protection planning procedures to ensure formal communication and exchange of information between different response parties, IMO said. 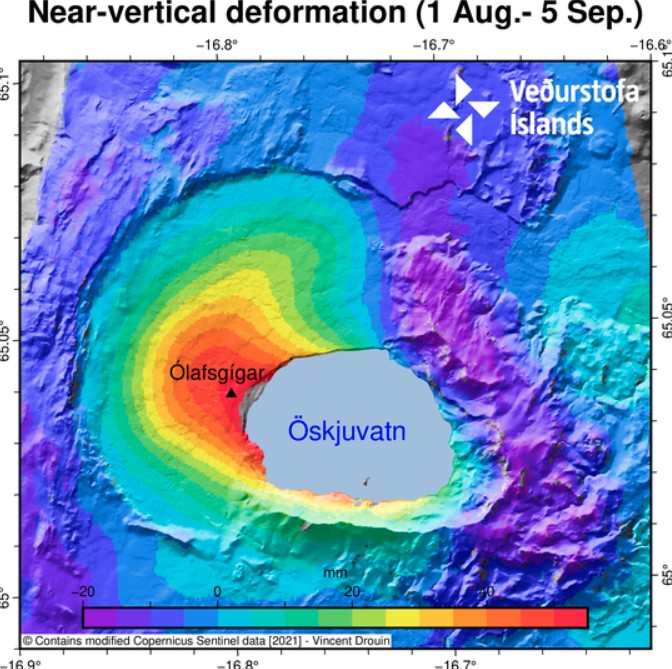 The image shows the near-vertical deformation in mm for the period August 1 to September 5, 2021. The InSAR image is obtained from two passages of Sentinel-1 satellite. Credit: IMO

GPS observations and ground deformation maps derived from Sentinel-1 satellite data reveal that the volcano began inflating at the beginning of August 2021.2

The uplift signal is centered on the western edge of Öskjuvatn, close to Ólafsgígar, and corresponds to ~5 cm/month (1.9 inches/month) of vertical motion.

Geodetic modeling (performed using both GPS and satellite data) indicates that the source of this inflation is located at a depth of approximately 3 km (1.8 miles) and corresponds to a volume change of approximately 0.001 km³/month. 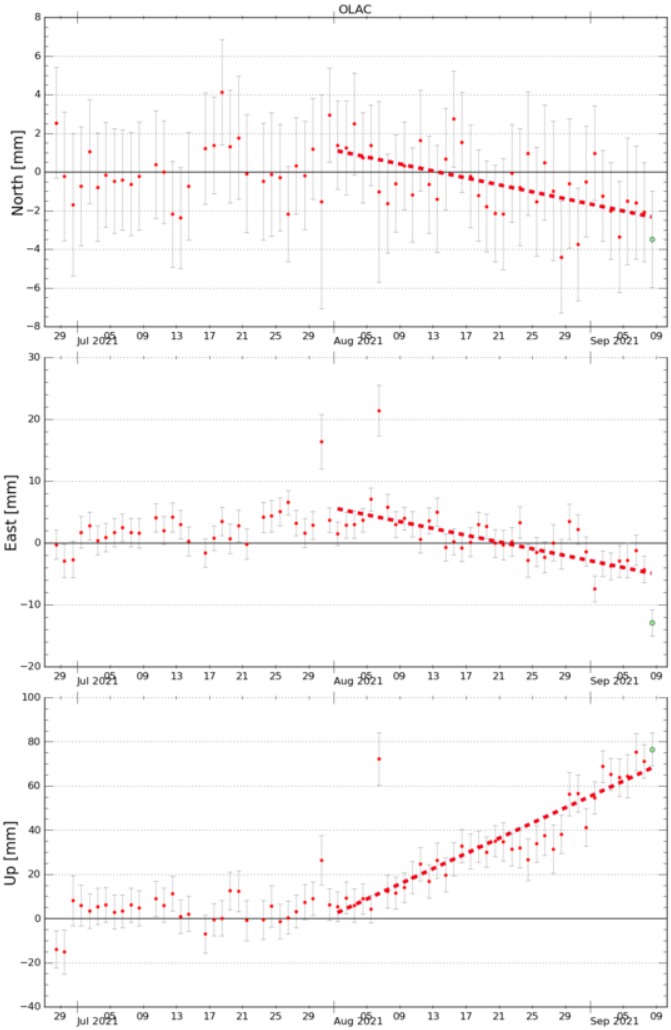 These graphs show GPS measurement from the station OLAC in the north, east, and up from July 27 – September 9, 2021. The station is close to the center of the uplift (shown in InSAR picture above) and it shows that in July/September the uplift started to show. Credit: IMO

Askja volcano is seismically active and earthquakes are regularly measured in the area.

Since then, continued subsidence of a rate of 1 cm/year (0.4 inches/year) was detected until this current inflation phase started, IMO said.

Active volcanoes in Iceland are often characterized by periods of inactivity, lasting years to decades, with intervals of enhanced seismicity, geothermal activity, and inflation. In most cases, magmatic intrusions do not culminate into an eruption.

It is very difficult to anticipate how the situation will evolve at this state, IMO said.

Next week, IMO and the Institute of Earth Sciences (UÍ) will potentiate the monitoring network around Askja to allow a better coverage and surveillance of the volcano.​

Askja is a large basaltic central volcano that forms the Dyngjufjöll massif. It is truncated by three overlapping calderas, the largest of which is 8 km (5 miles) wide and may have been produced primarily from subglacial ring-fracture eruptions rather than by subsidence.

A major rhyolitic explosive eruption from Dyngjufjöll about 10 000 years ago was in part associated with the formation of Askja caldera.