More than 230 deaths have been reported in British Columbia, Canada from Friday, June 25 to Monday afternoon, June 28, 2021, amid a historic heat wave in the Pacific Northwest. The number is nearly double the expected amount and is predicted to further increase as data continues to be updated. While the extreme heat wave has likely peaked, dangerous temperatures are still forecast across the region through the end of this week. A noticeable drop in temperatures is expected on July 7 and 8.

The heat wave, described by the National Weather Service (NWS) as "historic, dangerous, prolonged, and unprecedented" pushed temperatures into the triple digits, prompting heat warnings in the northwest U.S. and Canada's Arctic territories.

For the third consecutive day on Tuesday, Lytton B.C. set the record for the hottest temperature ever recorded in Canada as the mercury hit 49.5 °C (121.1 °F) in the Fraser Canyon village.

Several other cities in B.C. also smashed the previous national records, including Cache Creek, Grand Forks, Kamloops, Lillooet, Kelowna, and Osoyoos, all of which recorded temperatures at or over 45 °C (113 °F).

Armel Castellan, a meteorologist with Environment Canada, said, "There's really no hyperbole strong enough for this. We're just flummoxed with how much these records are breaking."

In a statement, British Columbia Coroners Service chief Lisa Lapointe said it received 233 reports of deaths over a four-day period of the scorching heat, from Friday to Monday afternoon, which was almost double the expected amount.

"Since the onset of the heatwave late last week, the BC Coroners Service has experienced a significant increase in deaths reported where it is suspected that extreme heat has been contributory."

The numbers are expected to increase as data continues to be updated, she said, adding that the fatalities underscore the vulnerability of the elderly, young people, and those with chronic illnesses in sizzling weather conditions.

"This is, as I say, another horrific year that we’re not accustomed to in a temperate rainforest," B.C. Premier John Horgan told local media. 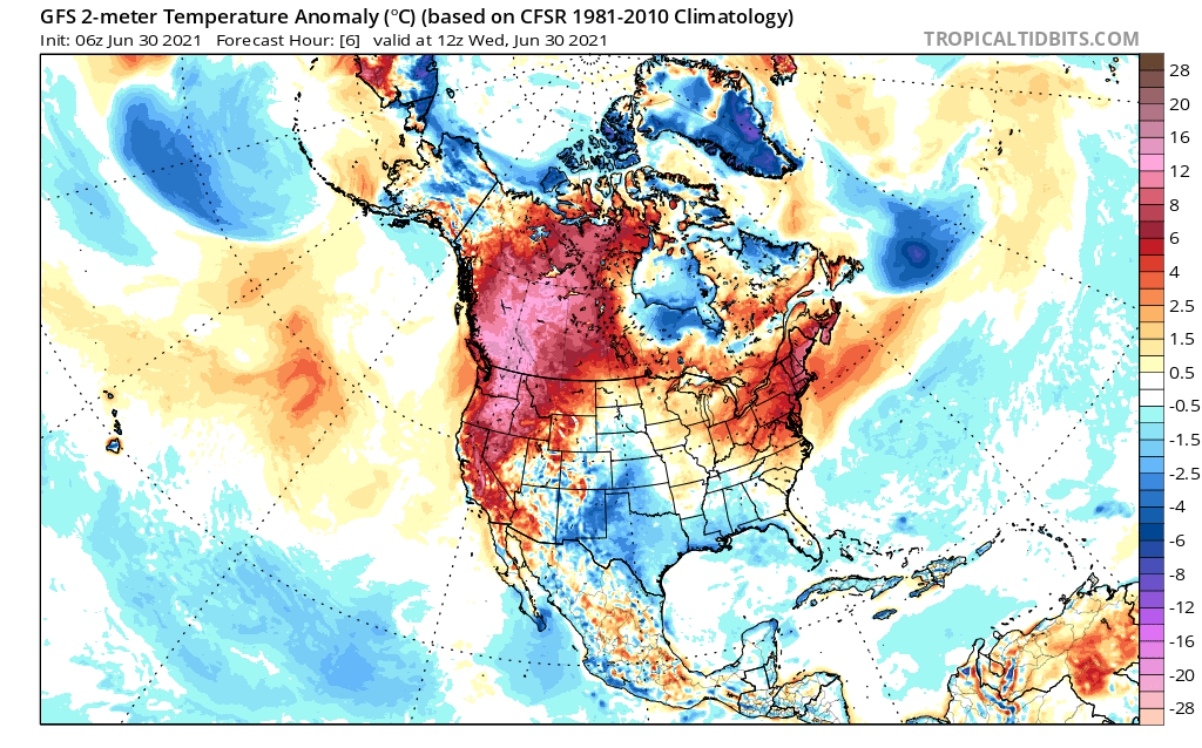 Amid a heatwave, British Columbia is also suffering from #wildfires  in recent days. On the day that #Lytton recorded 49.6°C smashing the Canadian  heat record, 90km away the #sparkslakefire was burning close to Kamloops Lake seen in this #sentinel2 image. #EO #Copernicus pic.twitter.com/DHFhs35TkB

British Columbia and Alberta 2300Z on Tuesday. RTMA has 1.5 mile grid spacing so the valleys show up as broiling. I've never seen such extreme heat on my maps like this  pic.twitter.com/zrkEzArnkd

Thunderstorms weren't the only thing that exploded over British Columbia today from the record heat. So did some fires. Based on the positioning of the upper level ridge & its NE winds, it's conceivable some of this smoke will hit parts of Inland NW tonight & tomorrow. #bcwx pic.twitter.com/mO8IglWP8G

Several school districts suspended classes for this week, while citizens sought refuge at the beach or in air-conditioned hotels.

Provincial health minister Adrian Dix said the area's ambulance system had received a record of 1 975 emergency calls on Monday. In a 24-hour period since Monday, the Royal Canadian Mounted Police in Burnaby said they had responded to more than 25 calls about sudden deaths.

In Vancouver, police said they were redeploying officers due to heat-related deaths. Since Friday, authorities had responded to more than 65 sudden deaths, including 20 on Tuesday solely. The officers said they typically respond to three to four sudden deaths in a day.

"We’ve never seen anything like this, and it breaks our hearts. If you have an elderly or vulnerable family member, please give them a call or stop by to check on them," said Sergeant Steve Addison.

Forecasters warn that extreme conditions will linger across the Prairies at least through this week and likely into next.