At least 23 tornadoes touched down in Alabama and Georgia on March 25, 2021, leaving extensive damage, at least 5 people dead outside of Birmingham, Alabama, and multiple injuries. This is the second tornado outbreak in the region since March 17.

Severe storms started affecting the region mid-afternoon and continued in several waves through the early evening and into the night. About 50 million people were in the path of severe weather, NWS Storm Prediction Center (SPC) said, with portions of Mississippi, Alabama, and Tennessee at most risk.

The SPC issued a high risk of severe weather risk in the South for the second time this month. This was the first time the center has issued 2 high risks for severe weather in the month of March since 1991. 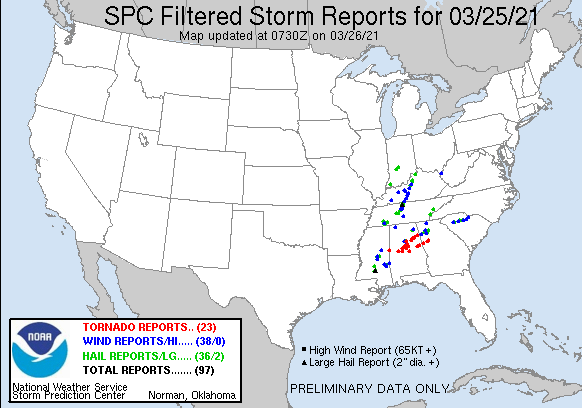 Most of the tornadoes moved across Alabama (17 of 23 reported), destroying homes, knocking over trees, and leaving more than 50 000 customers without power in Alabama and Georgia.

Alabama Governor Kay Ivey issued an emergency declaration for 46 counties ahead of the storm, opening shelters in and around Birmingham.