The Gravity Recovery and Climate Experiment Follow On (GRACE-FO) satellites showed indications of drought in European groundwater in a map taken on June 22, 2020.

According to the Copernicus Climate Change Service (C3S), meteorological drought conditions began in eastern Europe in early spring 2020, then affected other parts of the continent with drier-than-usual weather in April and May. In late May and June, surface soil moisture and waterways recovered a bit after heavy showers.

In a seasonal review and forecast, C3S meteorologists forecast below-average precipitation for southern and eastern Europe in June, July, and August. The GEOGLAM Crop Monitor, a Group on Earth Observations, put most of central and eastern Europe, as well as southwestern Russia, under a watch for potential drought impacts on wheat production.

The GRACE-FO satellites presented a map showing shallow groundwater storage and root zone soil moisture in Europe as of June 22, 2020. The colors depict the wetness percentile. Blue areas have more water than normal, while orange and red areas have less. Darkest reds depict dry conditions that should take place only about once in every 50 years.

"Monitoring root zone moisture is essential for managing agriculture because it is the water naturally available for growing crops," Michael Carlowicz of NASA's Earth Observatory noted.

"Soil moisture at Earth’s surface and in the root zone can fluctuate significantly over short periods of time; it can be quickly replenished by rainfall, but also can evaporate rapidly during heat waves and dry spells. In fact, recent rains in parts of Europe have significantly reduced surface moisture deficits." 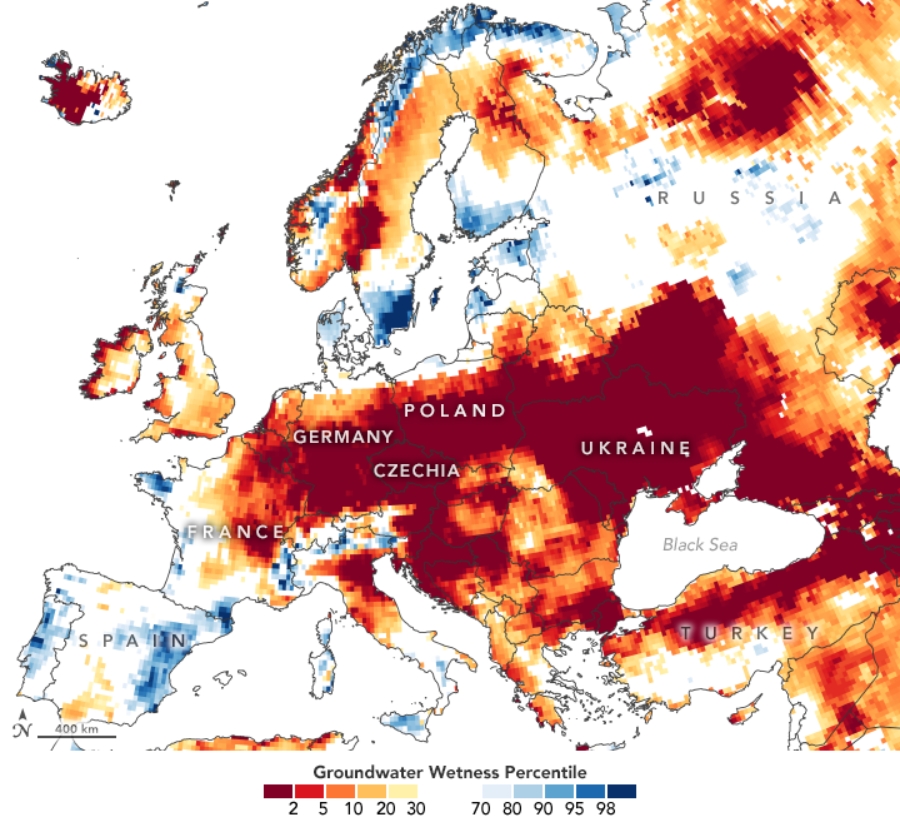 Groundwater is a deeper resource for drinking water and crop irrigation. It also sustains streams during dry periods. Unlike root zone and surface moisture, groundwater takes months to recover, as it has to be steadily replenished by surface moisture that steeps down to the water table.

Because much of the continent faced drought in the summers of 2018 and 2019, as well as little snow in the 2019-20 winter season, much of Europe started this year with a major deficit.

After six years of lack of rain, the Czech Republic reported this spring that almost 80 percent of its wells were recording mild to extreme drought. In Ukraine, the water level in the Desna River hit its lowest point in 140 years of observations. In early June, reservoirs around Kyiv reached its lowest levels in almost a century. Polish climatologists also reported one of its worst droughts in a hundred years, with agricultural drought in 11 of 16 provinces.

"From the global food security and agricultural commodities perspective, Europe is important because it is one of the largest wheat-producing regions in the world, and also a major maize-producing region. Both wheat and maize are major food security crops,” said Brian Barker, a leader of the GEOGLAM group.

"The persistent rainfall deficits, combined with the above-average temperatures since winter, have negatively affected large areas across Europe, reducing forecasted crop yields compared to the five-year average in a number of countries."