A new study by Harvard astronomers suggests there could be small meteors (1 to 100 mm / 0.04 to 4 inches) traveling at close to the speed of light when they hit the Earth's atmosphere. Such meteors are likely the result of nearby supernovae that speed up particles to sub-relativistic speed– from several thousand times the speed of sound to a fraction of light speed.

In the study by Amir Siraj and Professor Abraham Loeb, the astronomers addressed whether or not the ejecta from a supernova can be accelerated to relativistic speeds and move through the interstellar medium to reach the Earth's atmosphere.

Several astronomers had proposed the existence of these kinds of meteors in the past, including Lyman Spitzer and Satio Hayakawa. Scientists have also been studying if these meteors could survive through interstellar space.

"Empirical evidence indicates that at least one supernova has rained heavy elements on Earth in the past. Supernovae are known to release significant quantities of dust at sub-relativistic speeds. We also see evidence of clumpiness or 'bullets' in supernova ejecta," said Siraj.

"The fraction of mass contained in small clumps is unknown, but if just 0.01 percent of the dust ejecta is contained in objects of millimeter size or larger, we would expect one to appear in the Earth's atmosphere as a sub-relativistic meteor every month (based on the rate of supernovae in the Milky Way galaxy)."

Although there is a good theoretical basis, it remained a mystery whether or not meteors bigger than a grain of dust enter Earth's atmosphere at relativistic speeds. These would be meteors about 1 mm (0.04 inches) in diameter, or 10 mm (0.4 inches), or 100 mm (4 inches).

The current search methodology is technically not set up to search for these kinds of space objects.

Siraj noted that meteors usually travel near 0.01 percent of the speed of light and therefore, "current searches are tuned to find signals from objects moving at that speed."

He added that meteors from supernovae would travel a hundred times faster, about one percent of the light speed, so "their signals would be significantly different from typical meteors, making them easily missed by current surveys."

The researchers developed a hydrodynamic and radiative model to monitor the evolution of hot plasma cylinders which result from sub-relativistic meteors entering the atmosphere. This allowed them to calculate the kind of signals that would be produced, giving them a sign of what astronomers should watch out.

"We find that a sub-relativistic meteor would give rise to a shock wave that could be picked up by a microphone, and also a bright flash of radiation visible in optical wavelengths– both lasting for about a tenth of a millisecond," Siraj said.

"For meteors as small as 1 mm (0.04 inches), a small optical detector could easily detect the flash of light out to the horizon."

The researchers then outlined the kind of infrastructure that would enable astronomers to affirm the existence of these meteors and examine them. Based on the findings, they recommend that a global network of around 600 detectors with all-sky coverage that could spot a few of such meteors per year.

Other options would be searching through existing information for signs of relativistic meteors, and lastly, the possibility of using existing infrastructure to detect these objects.

"In addition, we note that the U.S. government's global classified network of sensors (including microphones and optical detectors) that provides the CNEOS Fireball and Bolide Database likely comprises a capable existing infrastructure."

"We urge the U.S. government to declassify broader swaths of the CNEOS data so scientists can search for sub-relativistic meteors without spending more taxpayer money to develop a new global network– with one already in operation."

Siraj and Loeb said this would provide a new perspective to the study of supernovae, allowing astronomers to put significant constraints on the ejecta they produce. 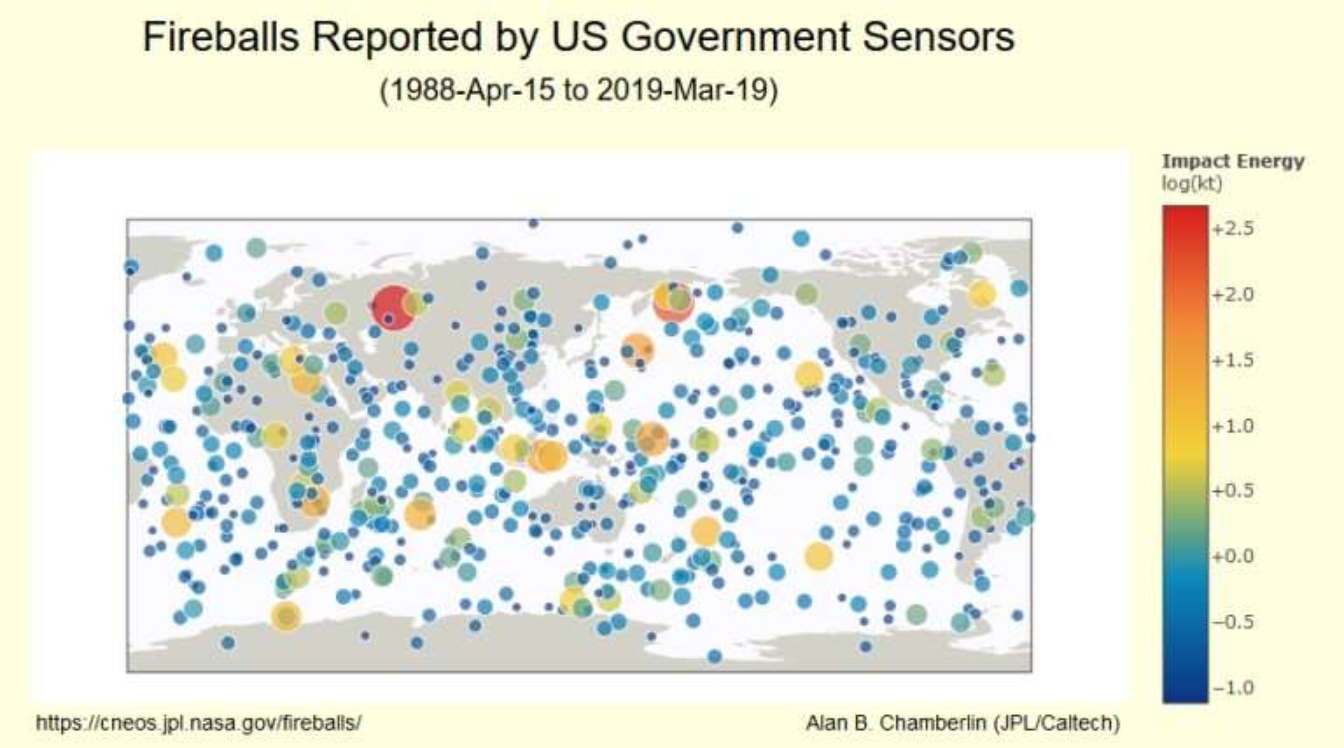 It is currently unknown whether solid particles larger than dust from supernova ejecta rain down on Earth at high speeds. We develop a hydrodynamic and radiative model to explore the detectability of ≳ 1 mm sub-relativistic meteors. We find that a large fraction of the meteor energy during its passage through the Earth’s upper atmosphere powers the adiabatic expansion of a hot plasma cylinder, giving rise to acoustic shocks detectable by infrasound microphones. Additionally, a global network of several hundred all-sky optical cameras with a time resolution of ≳ 10−4 s would be capable of detecting ≳ 1 mm sub-relativistic meteors.