Another extratropical storm is seen rapidly forming over the North Atlantic on Tuesday, February 18, 2020. The system is undergoing a bombogenesis phase and is expected to keep intensifying until it approaches Iceland on Wednesday evening, February 19. Thew new storm is also on track to hit western Europe following storm Dennis.

The cyclone is forecast to push a severe windstorm across the North Atlantic into western and northwestern Europe, according to Severe Weather Europe (SWE). SWE said maximum wind gusts may surpass 170 km/h (150 mph) between Iceland and Faroes, to the immediate south of the core.

The system will also generate rough waves and swell, gradually sweeping across Ireland, Faroe Islands, Ireland, and Scotland through Wednesday night and Thursday, February 19 into 20. 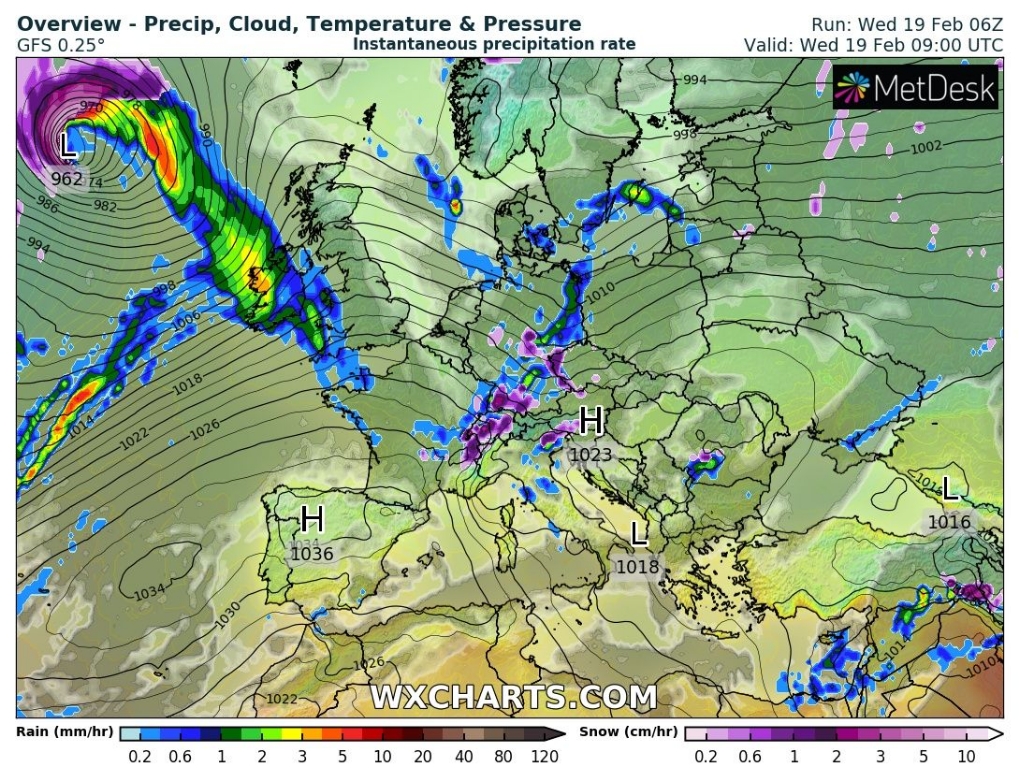 The Met Office has issued yellow warnings for portions of the UK until Saturday, February 22. Rains are likely to be heavy, especially over high grounds on Wednesday and Thursday which may cause inundations and travel disruptions.

According to the Met Office's forecast, rains are "becoming heavy and persistent over hills of Wales and northwest England," while southeastern areas will see cloudy with some drizzle on Wednesday night.

Heavier rain is expected across northwestern areas, moving slowly southeast into central portions, which will be followed by cooler, showery conditions.

"Further rain will arrive on Wednesday evening and this is likely to become prolonged and possibly heavy over areas of high ground," said chief meteorologist Andy Page.

"There is a chance that 60 mm (2.4 inches) of rain could fall in parts of South Wales over 24 hours. With the ground already saturated there is a chance of further flooding, members of the public should check their flood risk and stay up to date with flood warnings."

On Thursday, heavy rain and squally winds are forecast heading southeastwards, followed by colder conditions with suns and showers.

"Rain will be persistent and heavy at times in Wales and northwestern England overnight and a further front will move through on Thursday bringing heavy downpours," said Page.

For Friday to Sunday, February 21 to 23, some hill snow will fall on the north.

Parts of Britain are still recovering from the devastation caused by storms Ciara and Dennis in the past two weekends, with the latter being the second-strongest extratropical North Atlantic storm on record.