According to the Icelandic Met Office (IMO), unusually rapid inflation has been detected at Mt. Thorbjorn on the Reykjanes Peninsula over the past few days, indicating a possible magma accumulation. In addition, an earthquake swarm has been ongoing during the same period. Authorities have declared Uncertainty phase and raised the Aviation Color Code to Yellow. The last known eruption was during Reykjanes fires, which occurred between 1210 – 1240.

Inflation centered just west of Mt. Thorbjorn accompanied by an earthquake swarm just east of the inflation center (northeast of Grindavík) have been detected since January 21, 2020.

The fact that inflation is occurring alongside the earthquake swarm is a cause for concern and closer monitoring, IMO said.

"The inflation is unusually rapid, around 3 – 4 mm (0.11 – 0.15 inches) per day and has accumulated to 2 cm (0.78 inches) to date. It has been detected both on continuous GPS stations and in InSAR images," the office said, adding that the inflation is most likely a sign of magma accumulation at a depth of just a few km. 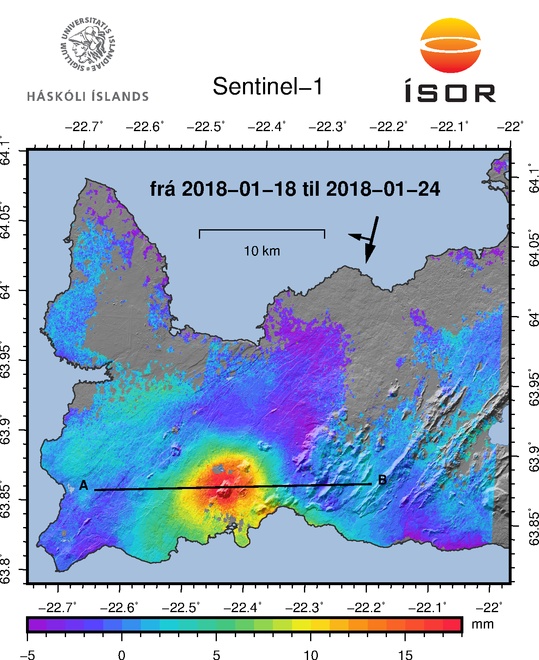 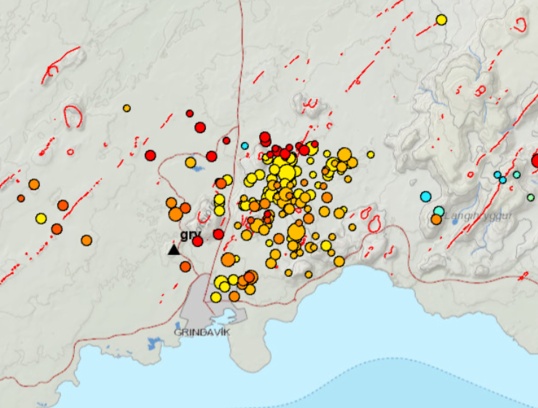 If magma accumulation is causing the inflation, the accumulation is very small, with the first volume estimate is around 1 million cubic meters (0.001 km3 / 0.0002 mi3). This is the conclusion of a meeting held with the Scientific council of the Civil Protection at the IMO this morning.

Accurate measurements of crustal deformation on the Reykjanes peninsula span approximately three decades. During this period no comparable signal has been measured.

This is unusual for this period, IMO said.

The last known eruption was during Reykjanes fires, which occurred between 1210 and 1240.

"Within that period, several eruptions occurred within that system, thereof there were three eruptions in the Svartsengi system. The eruptions were effusive (non-explosive) fissure eruptions erupting on 1 – 10 km (0.62 – 6.2 miles) long fissures. No explosive eruptions are known from this system. The largest eruption in the swarm, from the 13th century, formed Arnarseturshraun lava (estimated 0.3 km3 / 0.07 mi3 and 20 km2 / 7.72 mi2).

"Historically, the duration of these eruptions spans from a few days up to several weeks. Seismic activity is very common in this area and is linked to the plate boundaries, geothermal activity and possible magma intrusions. The largest earthquakes measured in this area are about M5.5."

The activity has only been ongoing for a few days and it is uncertain if it will escalate to more serious activity, IMO said.

Based on current information, the following scenarios are considered possible, without stating which is most likely or within what timeframe.

1. If the inflation is due to magma accumulation:

2. If the inflation is not caused by magma accumulation:

The National Commissioner of the Icelandic Police in cooperation with the Police Commissioner on Reykjanes has declared a state of uncertainty.

A public community meeting will be held in Grindavík on January 27 at 16:00 local time. The situation will be discussed with the Department of Civil Protection, scientists and first responders.

The 24/7 monitoring of the area has been increased at IMO.