Earthquake and ground deformation rates at Mauna Loa Volcano have exceeded long term background levels over the past several months, forcing the Hawaiian Volcano Observatory to raise the Alert Level to Advisory and the Aviation Color Code to Yellow. All communities on the flanks of the volcano should be prepared for a possible eruption.

An eruption is not imminent and current rates are not cause for alarm, HVO said. However, they do indicate changes in the shallow magma storage system at Mauna Loa.

Following a significant earthquake swarm in October 2018, HVO seismic stations have recorded an average of at least 50 shallow, small-magnitude earthquakes per week beneath Mauna Loa's summit, upper Southwest Rift Zone, and upper west flank. This compares to a rate of fewer than 20 per week in the first half of 2018.

Shallow earthquakes are occurring in locations similar to those that preceded Mauna Loa's most recent eruptions in 1975 and 1984.

During this same time period, GPS instrumentation and satellite radar have measured ground deformation consistent with renewed recharge of the volcano's shallow magma storage system. The current rate and pattern of ground deformation is similar to that measured during inflation of Mauna Loa in 2005 and again from 2014 – 2018.

Together, these observations indicate the volcano is no longer at a background level of activity. Accordingly, HVO is elevating the Mauna Loa alert level to ADVISORY and the aviation color code to YELLOW.

As has happened before, it is possible that current low-level unrest will continue and vary in intensity for many months, or even years without an eruption. It is also possible that the current unrest is an early precursor to an eventual eruption.

"At this time, we cannot determine which of these possibilities is more likely," HVO said.

HVO expects that days or weeks prior to an eruption, monitoring instruments will detect signs of an increased potential for eruption.

"However, it is also possible that the timeframe to eruption could be shorter – hours to days. All communities on the flanks of the volcano should be prepared." 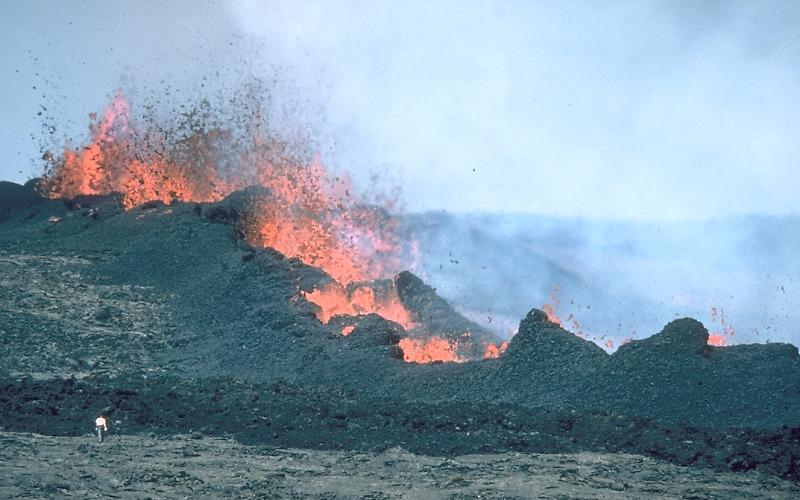 Lava fountains from fissure vents of the 1984 eruption of Mauna Loa, high on the northeast rift zone. Referred to as the 2 900-m (9 500 feet) vents, they are 19 km (11.8 miles) east of the original outbreak point that began within Moku‘āweoweo caldera about 36 hours earlier. Six separate structures eventually formed around the vents, including a cinder cone at the uprift end and a lava shield at the downrift end. The most productive vent along this fissure is in upper left. Note person in lower left. Credit: USGS/HVO

Mauna Loa is the largest active volcano on Earth. Eruptions typically start at the summit and, within minutes to months of eruption onset, about half of the eruptions migrate into either the Northeast or Southwest Rift Zones. Since 1843, the volcano has erupted 33 times with intervals between eruptions ranging from months to decades. Mauna Loa last erupted 35 years ago, in 1984.

Eruptions at Mauna Loa tend to produce voluminous, fast-moving lava flows that can impact communities on the east and west sides of the Island of Hawaiʻi. Since the mid-19th century, the city of Hilo in east Hawaiʻi has been threatened by seven Mauna Loa lava flows. Mauna Loa lava flows have reached the south and west coasts of the island eight times: 1859, 1868, 1887, 1926, 1919, and three times in 1950.

Featured image: Scientists looking into the bright glow of Mauna Loa's 1942 eruptive vent. Eruption occurred during WWII and was not publicized to prevent Japanese war planes from navigating to the island at night.