Rescuers are still trying to reach four coal miners who remained trapped nearly one kilometer (0.6 miles) underground in southern Poland after M4.1 earthquake hit the Borynia-Zofiowka-Jastrzebie mine on May 5. EMSC said the quake hit at the depth of 10 km (6.2 miles).

The quake struck the mine on the morning of May 5, initially trapping seven miners at a depth of about 900 meters (2950 feet), state mining office WUG said, according to Reuters.

Two had been rescued by mid-afternoon, and one was found late on May 5, but showed no signs of life, the deputy chief executive of the mine owner JSW, Tomasz Sledz, told reporters.

The third miner was buried and that it was not yet possible for rescuers to confirm he was dead, Sledz said, adding there had been no contact with the remaining four miners.

"We are doing all we can to save the miners," Ozon said.

There were about 250 people working in the mine at the time of the quake, JSW said. The missing miners were from a team of 11 that was drilling a new tunnel. Four escaped by themselves.

"There has never been such a powerful quake at the mine," JSW Coal company representative Katarzyna Jablonska-Bajer said 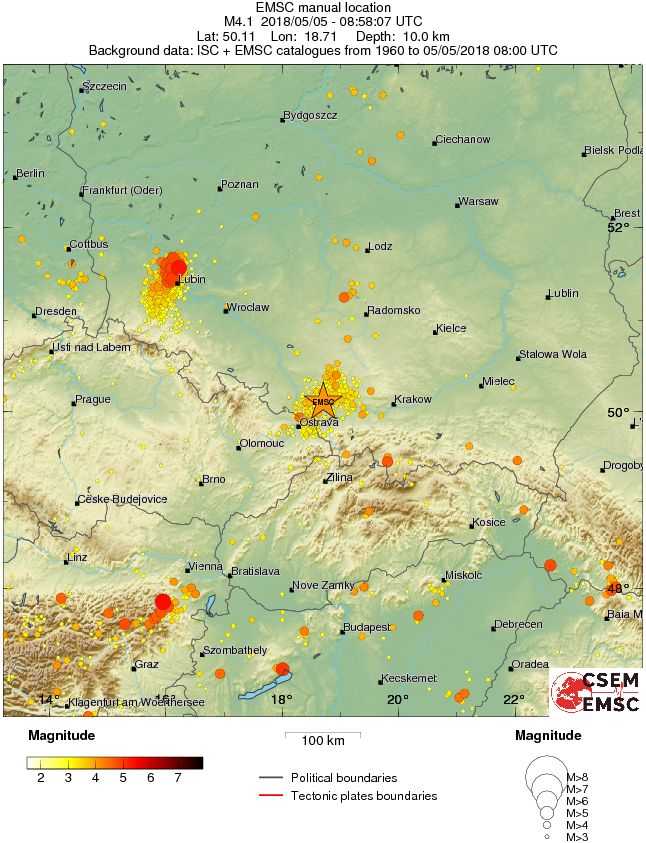 The 200-person rescue operation was held back earlier by high levels of methane, which reached a concentration of up to 58 percent.

A spokeswoman for JSW, the European Union’s largest coking coal producer, said earlier that the quake had damaged communications lines in the area.

Prime Minister Mateusz Morawiecki, who reached the mine on the evening of May 5, said the rescue operation was very difficult and that he hoped the remaining miners would be saved.

He also visited the two rescued miners at the Jastrzebie-Zdroj hospital.

WUG said the quake was of a type that can occur in coal mines after the removal of deposits builds up tensions in the rocks.

Polish news agency PAP said family members of the missing miners had gathered at the mine and were being counseled by psychologists.