Heavy rain and floods affecting Kenya since March 2018 have displaced more than 211 000 people, killed at least 72 and injured 33 across the country. The Kenya Meteorological Department has warned that heavy rains and thunderstorms are expected to continue​ and called on Kenyans to be prepared for flooding, as water levels have already surpassed the usual season’s average.​

The floods have disrupted livelihoods, with at least 3 420 hectares (8 450 acres of farmland submerged in water and more than 6 000 livestock killed, destroyed houses and damaged infrastructure, such as roads and health facilities, KRCS added.

The Masinga and Kamburu dams, which are both fed by water from Mount Kenya, are reaching dangerously high levels, UNOCHA reports, adding that if the rains continue, authorities may be forced to release water from the dams, which could have humanitarian consequences for villages downstream in Tana River and Garissa.

People in east and central regions have been advised to move to higher ground because of flood risks. The River Tana and Tana Delta have already flooded, reportedly submerging thousands of acres of farmlands and sweeping away crops, the office said.

There is also concern about crocodile attacks, with one man in the Tana Delta area reportedly already attacked. In Tana River County, about 50 000 people have had to leave their homes. 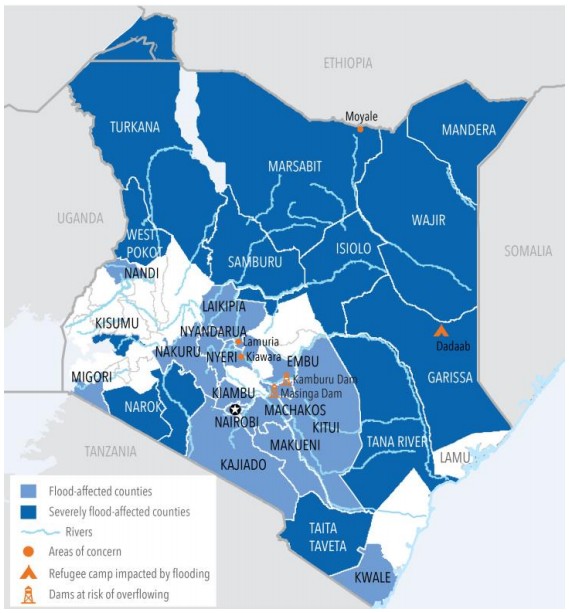 As of April 25, about 50 000 people are reportedly stranded in several villages in Moyale, near the border with Ethiopia, after a road linking them to the border town was cut off by floods. KRCS said they are unable to access food and water supplies for 10 days.

According to UNHCR, hundreds of refugees in Dadaab refugee camps, with over 225 000 refugees, have been forced to take shelter in schools and pit latrines are overflowing, leading to concerns over cholera and other water-borne diseases.

The Kenya Meteorological Department (KMD) has warned that heavy rains and thunderstorms are expected to continue, including in the Lake Victoria region, the highlands around the Rift Valley and the north-eastern counties of Marsabit, Isiolo, Mandera, Wajir and Garissa.

The department has called on Kenyans to be prepared for flooding, as water levels have already surpassed the usual season’s average.