A new study accepted for publication in AGU's Geophysical Research Letters claims average winter wave heights and extreme storms along the Atlantic coast of Western Europe have been rising for almost seven decades.

Scientists used 69‐year (1948 – 2017) numerical weather and wave hindcast to investigate the interannual variability and trend of winter wave height along the west coast of Europe, showing that the winter‐mean wave height, variability, and periodicity all increased significantly in the northeast Atlantic over the last seven decades which primarily correlate with changes in the climate indices North Atlantic Oscillation (NAO) and West Europe Pressure Anomaly (WEPA) affecting atmospheric circulation in the North Atlantic.

This increase in trend, variability, and periodicity resulted in more frequent high‐energy winters with high NAO and/or WEPA over the last decades. The ability of climate models to predict the winter NAO and WEPA indices a few months ahead will be crucial to anticipate coastal hazards in this region. 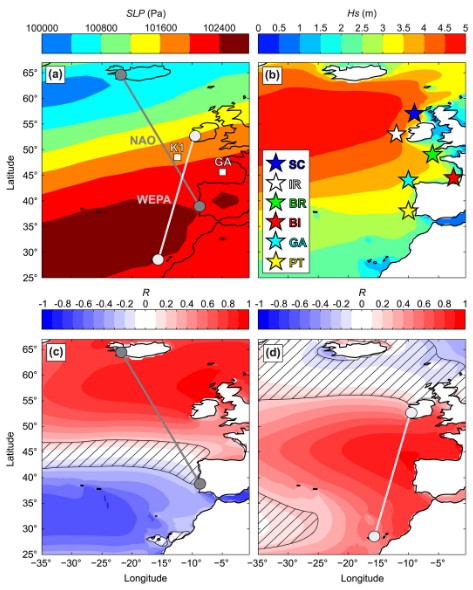 We explore the evolution of winter‐mean wave height, variability, and periodicity in the northeast Atlantic over 1949–2017 and the links with the primary climate indices explaining winter wave activity, which is critical from the coastal hazard perspective. The climate indices NAO and WEPA primarily drive the increase in winter‐mean wave height and periodicity, respectively, while both WEPA and NAO explain the increase in interannual variability, resulting in more frequent high‐energy winters over the last seven decades. Extreme winter‐mean wave heights become more frequent as WEPA and NAO positivity and variability increase. Predicting WEPA and NAO a few months ahead is crucial to anticipate coastal hazards, which is of interest for coastal and climate communities. Credit: Bruno Castelle et al.

The coastlines of Scotland and Ireland have seen the largest increases, with the average height of winter waves more than 10 mm per year / 0.39 inches (more than 0.7 meters / 27.5 in total) higher than in 1948.

That has also led to increased wave heights during extreme weather conditions, with levels off the Irish coast increasing 25 mm per year / 0.98 inches during the past 70 years, representing an average increase of 1.7 m / 66.9 inches.

Scientists who conducted the study say its findings are important for scientists and coastal managers looking to predict future wave heights, and take measures to protect coastal communities across Western Europe.

"The height of waves during winter storms is the primary factor affecting dune and cliff erosion, explaining up to 80% of the shoreline variability along exposed sandy coasts," Dr. Bruno Castelle, Senior Scientist at CNRS, said.

"So any increases in wave heights, and greater frequency of extreme storms, are going to have a major impact on thousands of communities along the Atlantic coastlines of Western Europe. This work and our other recent studies have shown both are on the rise, meaning there is a real need to ensure the Atlantic coasts of Europe are protected against present and future storm threats."

The same scientists have previously shown that the winter storms of 2013/14 were the most energetic to hit the Atlantic coast of western Europe since records began in 1948.