A line of severe storms swept through the southeastern United States on March 19 and 20, 2018, producing heavy rain, strong winds, very large hail and several damaging tornadoes. The storm downed trees and power lines, and caused significant hail and tornado damage. At least one person was killed.

The Storm Prediction Center received 9 tornado reports tornadoes by 11:30 UTC, March 20. All of them took place in northern Alabama where they caused significant damage. While still not officially rated (or confirmed), NWS Birmingham said they will be sending out 2 storm survey teams on Tuesday. 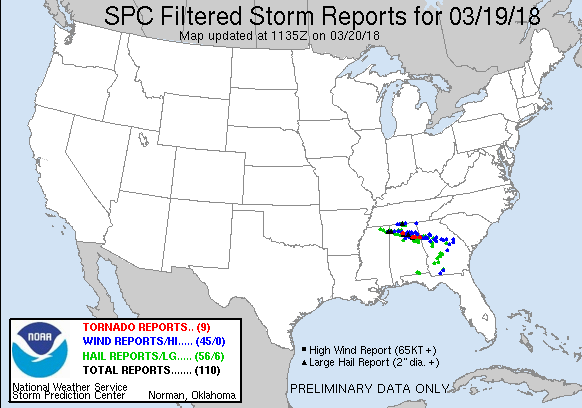 Some roads in that area are impassible, WSFA reported. Emergency vehicles are blocking all traffic from traveling south on Highway 21 after the intersection of Highway 202. Highway 204 is also blocked. It is believed 21 is closed due to debris that flew off of buildings, while 204 is closed due to damage on JSU's campus.

Alabama state troopers said the damage in Jacksonville left the city looking like a 'war zone.'

Three other tornadoes were reported in northern Alabama and confirmed by the National Weather Service in Huntsville. Around 15 000 customers were left without power, the Alabama Power said.

Hail the size of a fist was reported in Alabama's Cullman County where numerous cars and homes were damaged.

At least 26 000 customers were left without power and one person was killed in Georgia. Fox 5 Atlanta reported an off-duty Georgia state trooper was killed in Crisp County and his daughter hospitalized as the storms tore through the state.

Haralson County Schools in northwest Georgia announced they would be closed Tuesday because school buses would not be able to pass the roadways which were blocked late Monday by storm debris.

NWS warns severe thunderstorms with the potential for damaging winds, large hail, and a few tornadoes may occur across the Florida Peninsula and portions of the Southeast.