Malawi media said it was the strongest quake in this region since the sequence of earthquakes that struck Karonga district in 2009 and that it lasted for about 15 seconds.

There are unverified reports of two people sustained minor injuries while trying to run for safety.

Some damage was reported and assessments are underway. 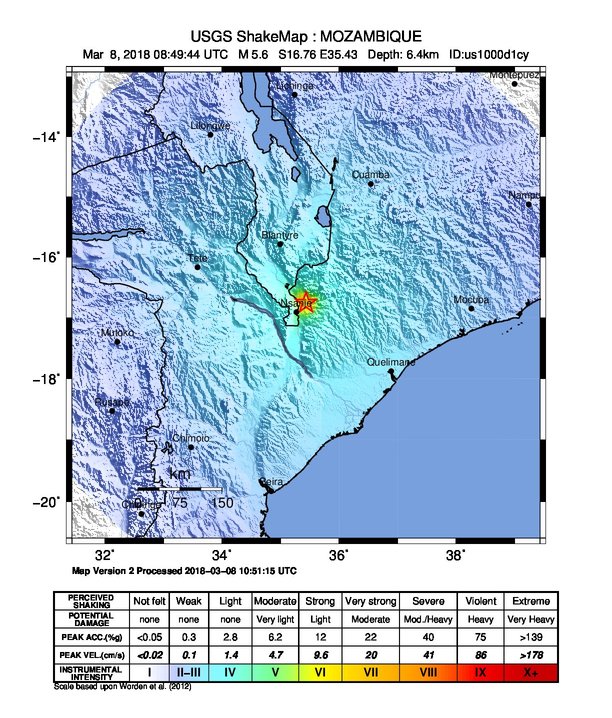 Mozambique is part of the East African Rift System extending south from the Gulf of Aden for more than 3 000 km (1 860 miles).

Though not for long considered completely an earthquake-free country, the preoccupation with seismic hazard was very small – if not at all inexistent – in Mozambique until the seismic events that took place in February 2006.1

These events, which peaked with the M7.0 Machaze earthquake of February 23, 2006, showed that the possibility of seismic occurrence in the country is real and should not be lightly put aside.

Since February 2006 there has been an increase in the seismic activity in the region of Machaze, which is located about 500 km (310 miles) north of Maputo and about 200 km (124 miles) from Beira and Chimoio.

This activity was of such intensity that almost 40% of the seismic events registered in the country since 1973 took place throughout 2006. 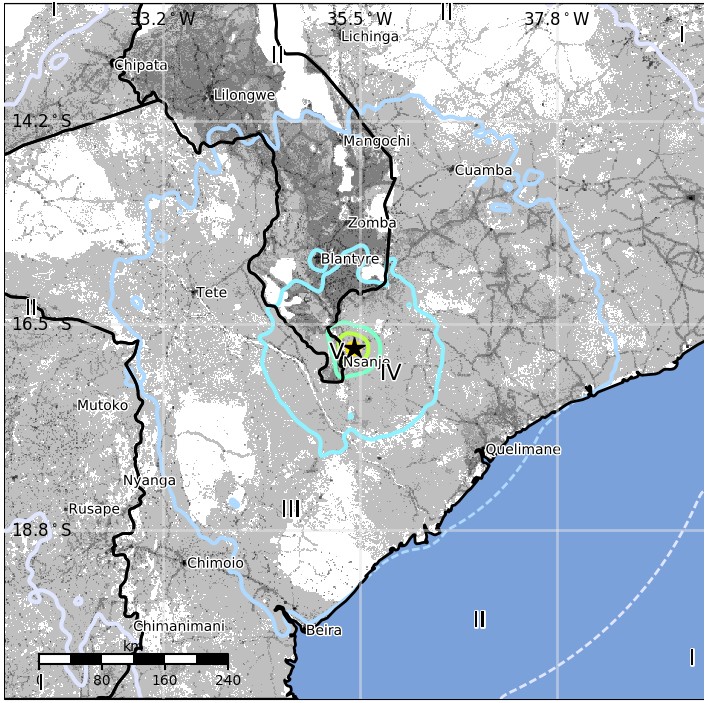 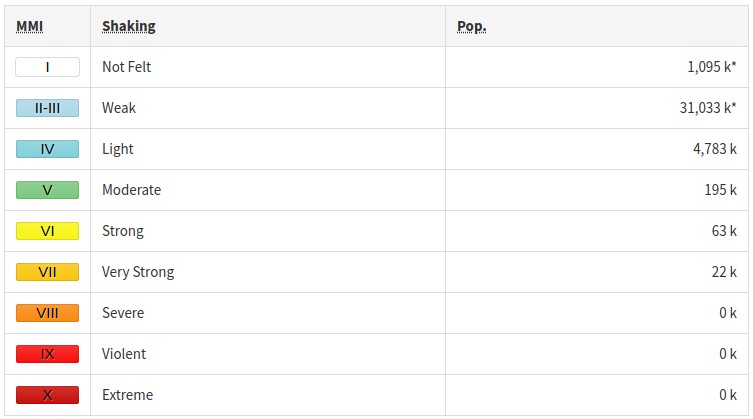 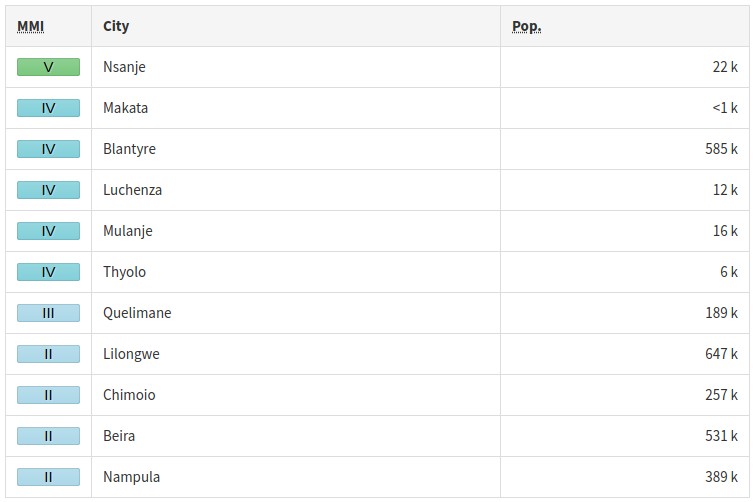 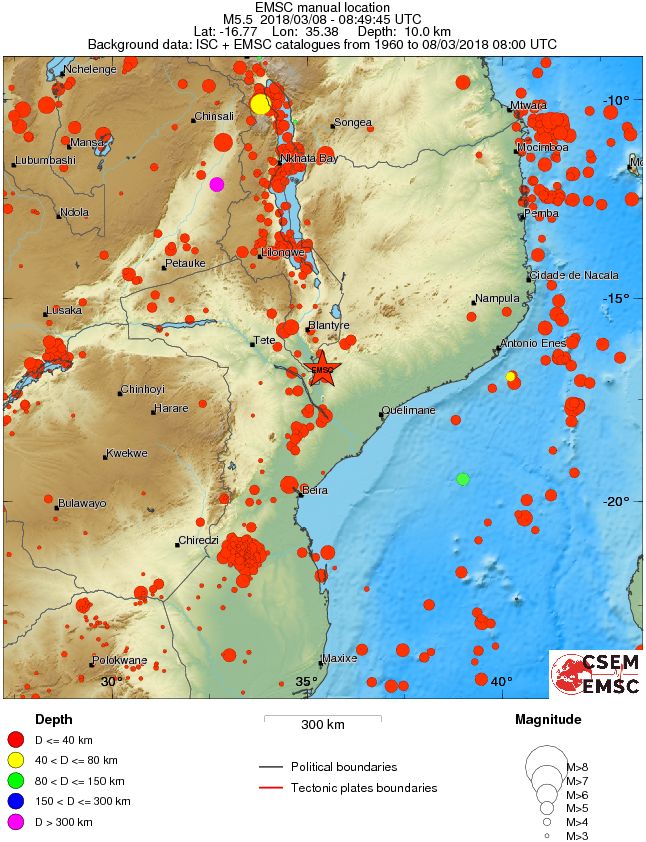 The East African Rift System (EARS) is a 3000 km long Cenozoic age continental rift extending from the Afar Triple Junction between the horn of Africa and the Middle East, to western Mozambique. Segments of active extension occur from the Indian Ocean west to Botswana and the Democratic Republic of the Congo (DRC). It is the only rift system in the world that is active on a continent-wide scale, providing geologists with a view of how continental rifts develop over time into oceanic spreading centers like the Mid-Atlantic Ridge. 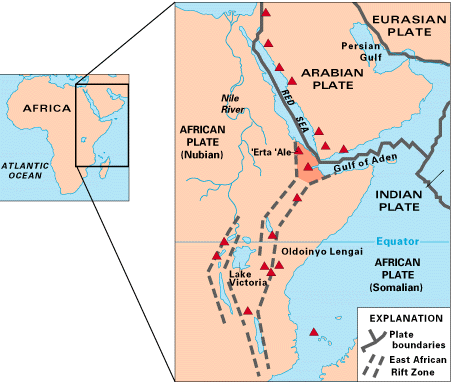 Rifting in East Africa is not all coeval: volcanism and faulting have been an ongoing phenomenon on the continent since the Eocene (~45 Ma). The rifting began in northern East Africa, and led to the separation of the Africa (Nubia) and Arabia plates in the Red Sea and Gulf of Aden, and in the Turkana area at the Kenya-Ethiopia border. A Paleogene mantle superplume beneath East Africa caused extension within the Nubia plate, as well as a first order topographic high known as the African superswell which now includes most of the eastern and southern segments of the Nubia plate. Widespread volcanism erupted onto much of the rising plateau in Ethiopia during the Eocene-Oligocene (45 – 29 Ma), with chains of volcanoes forming along the rift separating Africa and Arabia. Since the initiation of rifting in northeastern Africa, the system has propagated over 3000 km to the south and southwest, and it experiences seismicity as a direct result of the extension, as well as active magmatism.

Today extension and magmatism are localizing in distinct eastern, western, and southwestern branches, marking the edges of two or more microplates between the sub-parallel zones of extension in East Africa. The borders of the microplates (known as Victoria and Rovuma) with the Nubia plate to the west and Somalia plate to the east now represent the most seismically active zones on the continent where normal faulting earthquakes occur on a monthly basis. They are also the sites of volcano-tectonic earthquakes. Along the rift, models of sparse GPS data and earthquake slip vectors predict average spreading rates of 1-4 mm/yr, increasing from north to south in the western branch, and increasing from south to north in the east.

Seismicity in the East Africa Rift is widespread, but displays a distinct pattern. Seismicity is characterized by mainly shallow (< 40 km) normal faults (earthquakes rupturing as a direct result of extension of the crust), and volcano-tectonic earthquakes. The majority of events occur in the 10-25 km depth range. This pattern is widespread throughout the EARS, and the relationship between depth of earthquakes, the deformation of continental lithosphere, and magmatic processes in many segments of the rift.

The three limbs of the Afar triple junction zone experience major earthquakes, as well as frequent volcanic eruptions and dike intrusions. The magnitude of earthquakes during volcano-tectonic events is usually less than M 6, but large volumes of magma accommodating plate opening may occur during these intense, smaller magnitude swarms. The largest earthquakes recorded in this area occurred in a swarm, along a section of the evolving Arabia-Nubia plate boundary in Afar in August 1989. Studies of this earthquake swarm show that the events occurred as a result of slip on conjugate normal faults bounding the narrow Dobi graben. The swarm, made up of 25 M ≥ 4.2 earthquakes, occurred over 48 hours from 11:17 UT August 20, 1989. The events were all shallower than 15 km as a result of the thin crust beneath the triple junction compared to the surrounding continental crust. Conversely, the deepest earthquake ever recorded on the African continent (~62 km) also occurred beneath the Afar triple junction on November 8th, 1978. This M 4.9 earthquake occurred beneath an active spreading segment, and was probably associated with the movement of magma at depth during the rifting episode.

The western branch is divided into three main segments. The northern and middle segments border the Nubia – Victoria microplate boundary, and the southern segment borders the Nubia – Rovuma boundary. The northern segment comprises the West Nile region (WNR), and Lakes Albert, Kivu, and Edward (LAKE); the middle segment includes Lakes Tanganyika and Rukwa (LT, LR); and the southern segment encompasses Lake Malawi and central Mozambique (LM). The two largest instrumentally recorded events in Africa occurred ~ 300 km north of Lake Albert, in an area of Mesozoic (250-65 Ma) rifting. These M 7.1 earthquakes struck four days apart in May 1990, both at ~ 15 km depth. Their tectonic relationship to the Albert rift system or Mesozoic faults remains unclear. The most recent major earthquake to strike the region occurred on February 22nd, 2006. This M 7.0 event struck at a depth of 11 km in central Mozambique around midnight local time, killing two and injuring 15. The earthquake was felt in Mozambique, Zimbabwe, Swaziland, South Africa, and Zambia, but no major structural damage was reported.

The eastern branch is a discontinuous system of rifts, most of which have experienced magmatism since their onset. From north to south, these are the Ethiopian Rift (ER), the Kenya Rift (KR), the northern Tanzania divergence (NTD), and the Davie Ridge (DR). The Kenya Rift experienced a major M 6.9 earthquake in 1928, but has witnessed only small magnitude swarms since then. As in the Afar and Ethiopian rift segments where magma supply appears to be abundant, dike intrusions here accommodate extensional strain at lower stress levels than are required to cause slip along large fault systems bounding the rift, generally resulting in relatively smaller earthquakes. Seismicity near the northern Tanzania Divergence marks the diffuse, volcanically active Victoria – Somalia plate boundary. Consistent with the widespread magmatism in this rift sector earthquake magnitudes are generally less than M 6, and result from normal faulting. The Davie Ridge marks the Rovuma – Somalia plate boundary in the oceanic lithosphere of the western Indian Ocean basin. On May 14, 1985, two M 6.0 – 6.3 earthquakes struck this area, less than 100 km off the coast of northern Mozambique. (USGS)