Following a M4.6 earthquake that hit just NE of Gonzales, California on November 13, 2017, the USGS has registered more than 130 aftershocks within the 5 km (3.1 miles) of the epicenter. Although most of those aftershocks weren't felt by the Central Coast, the aftershock sequence is raising fears a large earthquake is about to strike the region.

This one has been a quite productive aftershock sequence, but only 17 were stronger than M2.5 and six were greater than 3.0,  USGS seismologist Ole Kaven said. "We suspect there will be aftershocks in the 2 to 3 magnitude range for at least a few more weeks, but smaller shakers could continue for even longer."

"Last Monday's quake occurred on a "creeping section" of the San Andreas Fault, so seismic activity in the area is normal," Kaven said.  "It's a reminder that we are living in earthquake country." 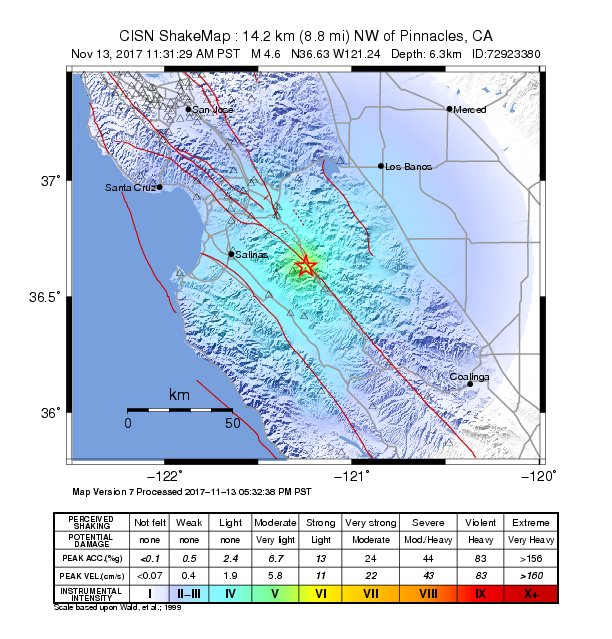 Similarly sized earthquakes were recorded in the same spot in 2001, 2004 and 2011. In each case, the USGS observed a pattern of aftershocks like the region is seeing now.

"The San Andreas fault in southern California last had a major quake in 1857 (M7.9)," Robert Graves, a research geophysicist at USGS, recently said.

"Studies that have dated previous major offsets along the fault trace show that there have been about 10 major quakes over the past 1 000 – 2 000 years, with the average time between these quakes about 100 – 150 years."

This suggests the region is overdue for another major earthquake by 10 years.