The Earth’s magnetic field, generated some 3 000 km (1 860 miles) below our feet in the liquid iron core, threads through the whole planet and far into space – protecting life and satellites from harmful radiation from the Sun. But this shielding effect is far from constant, as the field strength varies significantly in both space and time.

Over the last century, the field strength has changed relatively slowly: the biggest change is a 10% fall in the southern Atlantic, which is still a large enough effect to cause electronic problems for satellites that have passed through the region. However, new observations and modeling suggest that a much greater change strangely occurred around 1000 BC in a much smaller region.

This “geomagnetic spike” offers a potentially profound new insight into the dynamics and evolution of Earth’s hidden interior that is now starting to be uncovered.

So what are geomagnetic spikes and what are the prospects and implications of another one coming along? The geomagnetic spike of 1000 BC was first identified from copper slag heaps located in Jordan and Israel. These were dated from organic material within the slag heaps using radiocarbon dating.

Scientists then investigated the copper using sophisticated laboratory techniques to work out what the Earth’s magnetic field was at the time – relying on the fact that when melted iron cools rapidly, it freezes with a signature of the field at that instant. By taking samples from different layers of the slag heap – with slightly different ages and magnetization – they could also see how the field strength changed with time. They found that the copper slag had recorded Earth’s magnetic field strength rising and then falling by over 100% in only 30 years.

Unexpectedly high field strengths around 1000 BC have also been uncovered in Turkey, China and Georgia from a variety of sources. Remarkably, the field strength in India, Egypt and Cyprus around the same time was completely normal, indicating that the spike was perhaps only 2 000 km (1 240 miles) wide. Such a rapid change over such a small area marks out the geomagnetic spike as one of the most extreme variations of Earth’s magnetic field ever recorded.

The spike seen in Jordan is the result of a much stronger and narrower magnetic feature that was created in Earth’s liquid core. The process that generated the spike is still shrouded in mystery, though it is likely related to the flow of iron within the core, which drags around the magnetic field as it moves (currents produce magnetic fields). The core is heated from below and cooled from above, so the iron within is thought to undergo vigorous turbulent motion, similar to a strongly heated pan of water. One possibility is that the spike was drawn to the surface of Earth’s core by a jet of upward moving iron.

After this, the spike may have moved northwest before merging with other magnetic features near the geographic poles. Alternatively, the spike intensity may have waned while it remained under Jordan.

All of these options suggest that behavior of the liquid iron at the top of Earth’s core around 1000 BC was very different to that seen today. Most of our knowledge of the core derives from roughly the last 200 years, corresponding to the time when direct magnetic field measurements have been available. Prior to the discovery of the spike, there was no reason to suspect that core flow speeds would be much different in 1000 BC to today – indeed, the available models suggest there was little difference.

However, explaining the rapid changes associated with the spike requires flows five to ten times those at present, a large change in a short space of time. Moreover, such a narrow spike requires a similarly localized flow, which contrasts with the global-scale circulations we see today. The prospect that the iron core could flow faster and change more suddenly than previously thought, together with the possibility that even more extreme spike-like events occurred in the past, is challenging some conventional views on the dynamics of Earth’s core. 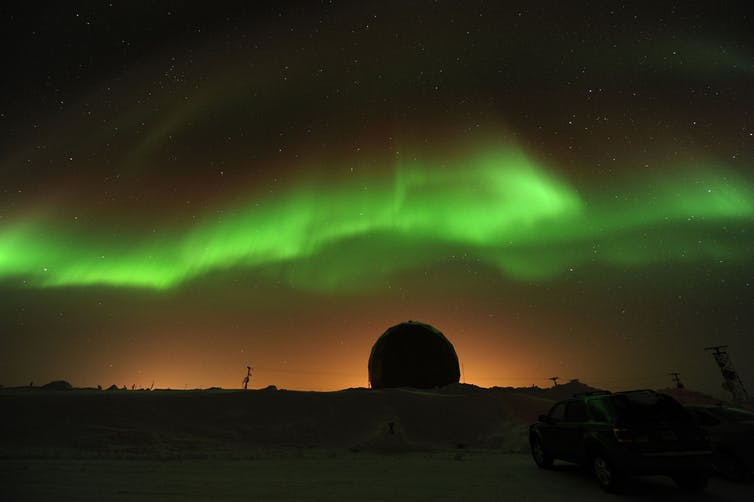 Of particular importance are geomagnetic storms (caused by the solar wind), which are known to cause power outages and disruption to satellite and communications systems. The economic implications of severe storms are estimated to run into billions of pounds and their importance is now reflected in the national risk register.

Geomagnetic storms tend to be most prevalent in regions where Earth’s magnetic field is unusually weak. Spikes are regions of an unusually strong magnetic field, but a fundamental law of nature means that they must be accompanied by regions of weaker field elsewhere on the globe. The key question is whether the field gets a little bit weaker over a large region or becomes very weak in just a small region. The latter “anti-spike” scenario could be similar to or more extreme than the current south Atlantic weak spot.

Whether there will be more spikes is hard to say. Until very recently, the Jordanian spike was the only such event ever observed. However, there is now tantalizing new evidence for another spike-like feature in Texas, also around 1000 BC. Our understanding of what spikes should look like, how they change in time, and how they relate to the motion of the liquid iron in Earth’s core are also improving rapidly.

Coupled with numerical simulations that model the dynamics of Earth’s core, it may soon be possible to make the first predictions of how often spikes occur and the most likely locations where they could have occurred in the past (and may occur in the future). It could turn out that they are more common than we think.

Written by Christopher Davies (The Conversation)