Severe weather warnings for the coastal trough which has delivered significant rainfall for Queensland over the past few days have now been canceled. However, flood warnings remain in place as some of the areas recorded between 300 and 500 mm (11.8 – 19.7 inches) of rain, in places even more than 500 mm (19.7 inches). At least one person has been killed and 6 are still missing as of early Wednesday, October 18.

One person was killed late Monday after his car was swept away by floodwaters near Gympie.  Search crews spent about six hours overnight searching for the 67-year-old man, who had been driving with his wife along Marys Creek Rd when they stopped at a flooded causeway just before 19:00 AEST. The vehicle was found Tuesday morning, more than 12 hours after the incident. The police confirmed his body was found inside.

Just 30 minutes later after that incident, a 17-m long (56 feet) commercial trawler with 7 people on board overturned due to strong winds and heavy rainfall and sank off the central Queensland coast several hours later. One survivor was found in the ocean Tuesday morning by a passing boat. At this time, search and rescue operation for the six missing fishermen, although hampered by severe weather, is in progress. Police, however, is saying that the likelihood of finding them alive is not looking real promising. 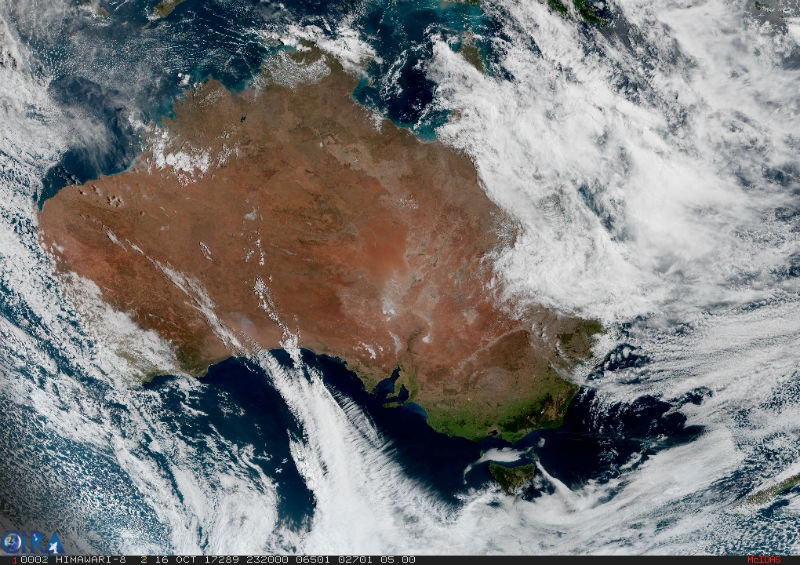 Persistent heavy rainfall continued into October 17 across coastal regions from Bundaberg as ar north as Proserpine, including Gladstone, Rockhampton, and Mackay.

The trough shifted further north overnight, and severe weather warnings remained in place for further heavy rain. A Flood Watch was issued for coastal catchments of Capricornia and Central Coast districts, and flood warnings have also been issued.

"Due to the slow moving nature of this system continued river rises can be expected," BOM said October 17.

Widespread heavy falls were recorded for the coastal strip between Noosa and Gladstone with a large number of sites recording over 100 mm (3.93 inches).

The highest falls were in the adjacent inland regions from Agnes Water and Noosa. 24-hour rainfall totals to 09:00 AEST, October 17:

A large section of the coast north of Brisbane, stretching from the Sunshine Coast to Gympie, Bundaberg, Gladstone, Rockhampton, Mackay and Proserpine, were all covered by severe weather warnings for heavy rainfall with the potential for flash flooding into October 18.

A number of rainfall observations sites recorded rainfall in the 300 and 500 mm (11.8 – 19.7 inches) range between Monday and Wednesday with Miriam Vale and nearby Westwood Range exceeding the 500 mm (19.7 inches) mark. 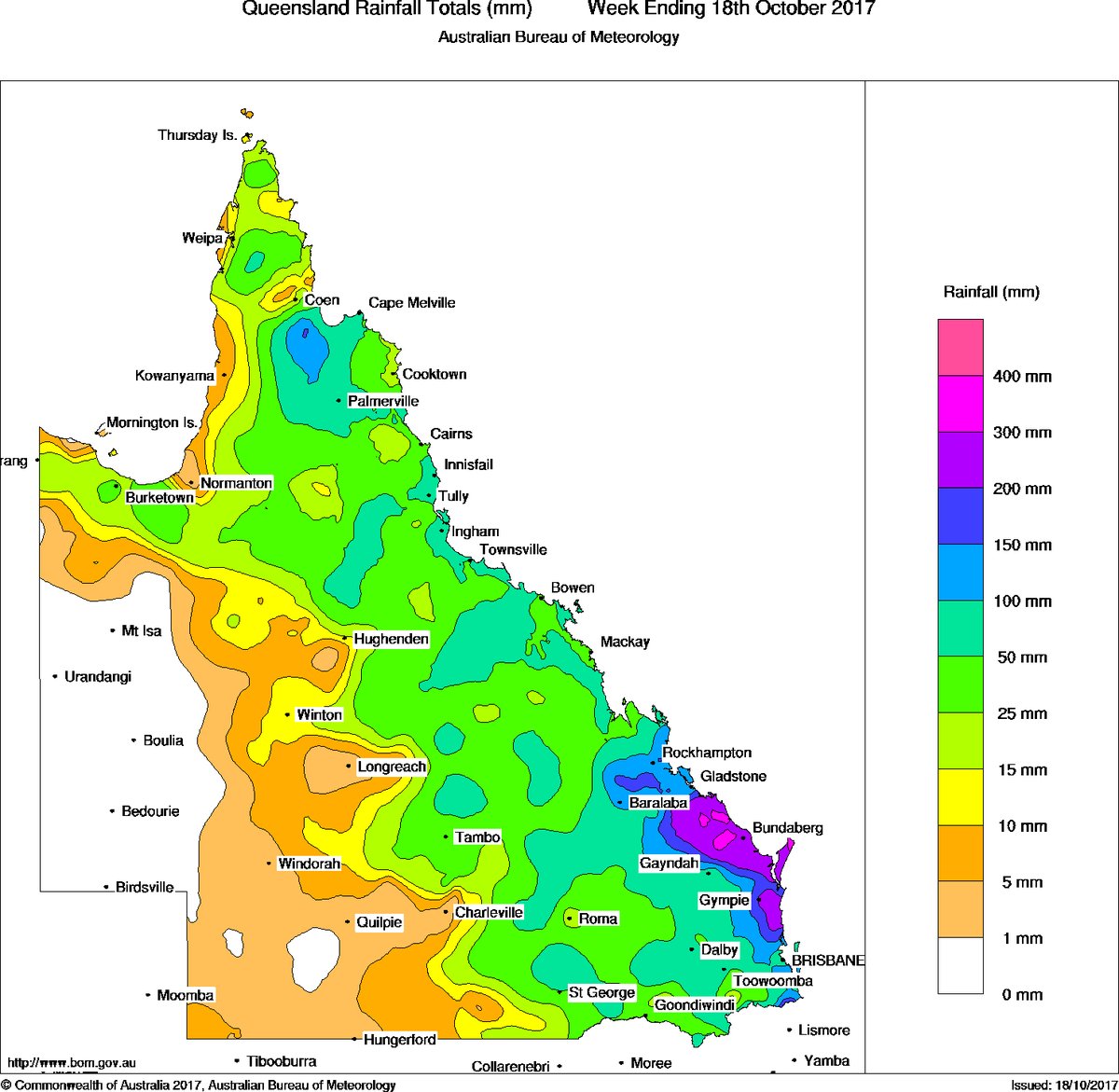 A Major Flood Warning remains in place for the Kolan River and Baffle Creek, which is located south of Seventeen Seventy and Agnes Water where the heaviest falls have been recorded.

"A major flood peak is expected at Essendean Bridge in Baffle Creek overnight, with river levels expected to remain above the major flood level in the Kolan River at Bucca Weir Wednesday night," BOM warned. 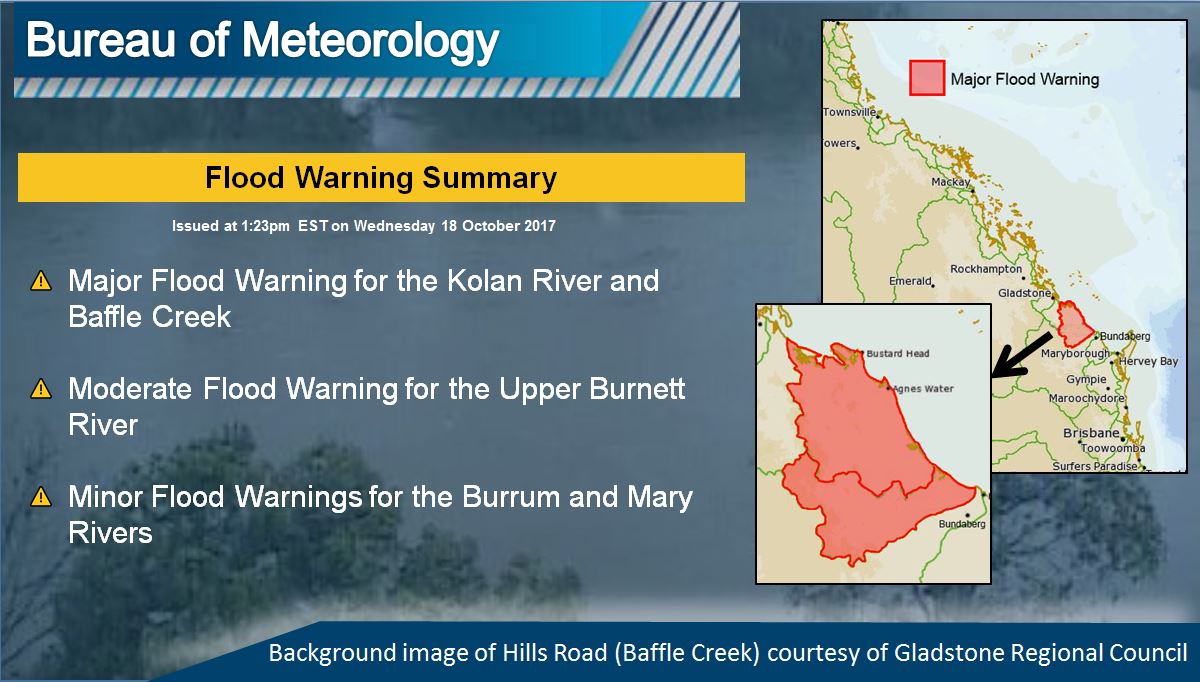 Queensland Fire and Emergency Services is urging the public to stay tuned for the latest official forecasts and warnings from the Bureau of Meteorology.

"Follow the advice of local emergency services. Avoid travel if possible while warnings are in place and remember: if it’s flooded, forget it."