Following a sharp increase in seismic activity, Indonesian authorities have raised the alert level for Agung volcano in Bali from 3 to 4 (of 4) at 20:30 local time (13:30 UTC) on September 22, 2017. Massive evacuation of communities around the volcano is in progress.

Nearly 6 000 people were evacuated from villages near the volcano, according to media reports. BNPB's spokesperson, Sutopo Purwo Nugroho, said many of the residents are independently evacuating to the city of Klungkung.

While seismicity is still elevated and smoke can be seen above the crater, the eruption has not yet started. There are, however, indications of magma rising to the surface.

Authorities warned residents and tourists that no activity is allowed within 9 km (5.6 miles) from the crater, and within 12 km (7.4 miles) to the north, northeast, southeast and south-southwest.

Residents are asked to remain calm and not to trust unverified sources. 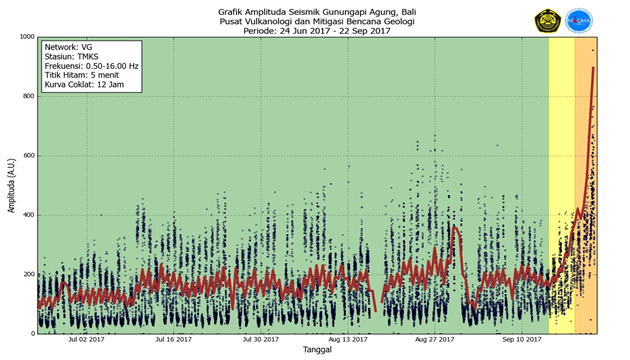 The last eruption of this volcano started in February 1963 and ended in January 1964. This was one of the world's largest eruptions of the 20th century (VEI 5). It produced voluminous ashfall along with devastating pyroclastic flows and lahars that caused extensive damage and some 1 100 fatalities.