A positive polarity coronal hole high speed stream (CH HSS) is affecting our planet and will continue to do so over the next three days.

Over the past 24 hours, by 12:30 UTC on July 22, solar wind parameters as measured by DSCOVR spacecraft reflected the influence of a positive polarity CH HSS. Solar wind speeds were near 700 km/s at 12:30 UTC on July 21, reaching a maximum of 770 km/s, and then decreased to approximately 525 km/s by 12:30 UTC today. Total field measurements ranged between 4 and 8 nT while Bz component dropped as low as -7 nT, SWPC reports. The phi angle was in a positive orientation.

Solar wind parameters are expected to decrease over July 22 and 23, returning to nominal conditions by July 24.

Geomagnetic K-index of 5 (G1 – Minor geomagnetic storm) threshold was reached at 11:42 UTC. Under G1 conditions, the area of impact is primarily poleward of 60 degrees Geomagnetic Latitude. Weak power grid fluctuations can occur, minor impact on satellite operations is possible, and aurora may be visible at high latitudes.

The geomagnetic field is expected to be at quiet to active levels for the remainder of July 22 and into July 23 as CH HSS effects persist. Mostly quiet to unsettled conditions are expected on July 24 as CH effects gradually taper. 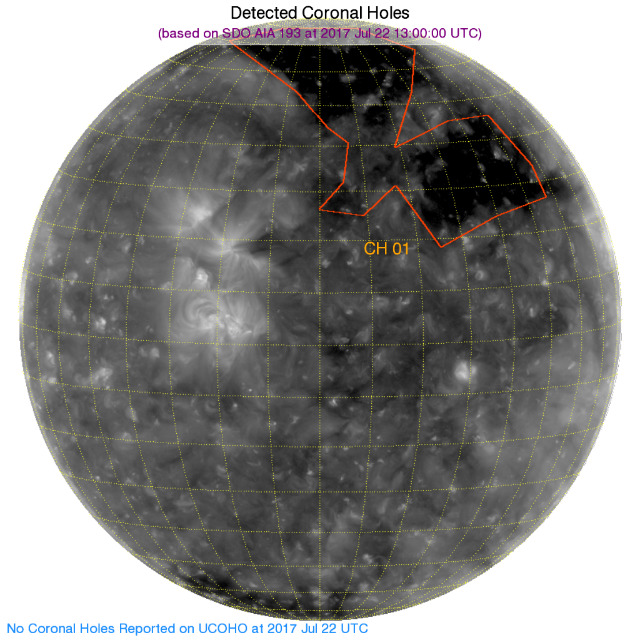 During the past 24 hours, solar activity was very low and is expected to remain like that over the next three days.

There are currently no numbered sunspots on the Earth-side of the Sun, a sure sign we are heading into Solar Minimum. At the same time, cosmic radiation is increasing.

Spaceweather.com and the students of Earth to Sky Calculus launched a space weather balloon to the stratosphere hours after the CME arrived. They detected a 7% decrease in X-rays and gamma-rays (two tracers of secondary cosmic rays). Neutron monitors in the Arctic and Antarctic recorded similar decrements. For instance, these data from the Bartol Research Institute show a nearly 8% drop in cosmic ray neutrons reaching the South Pole: 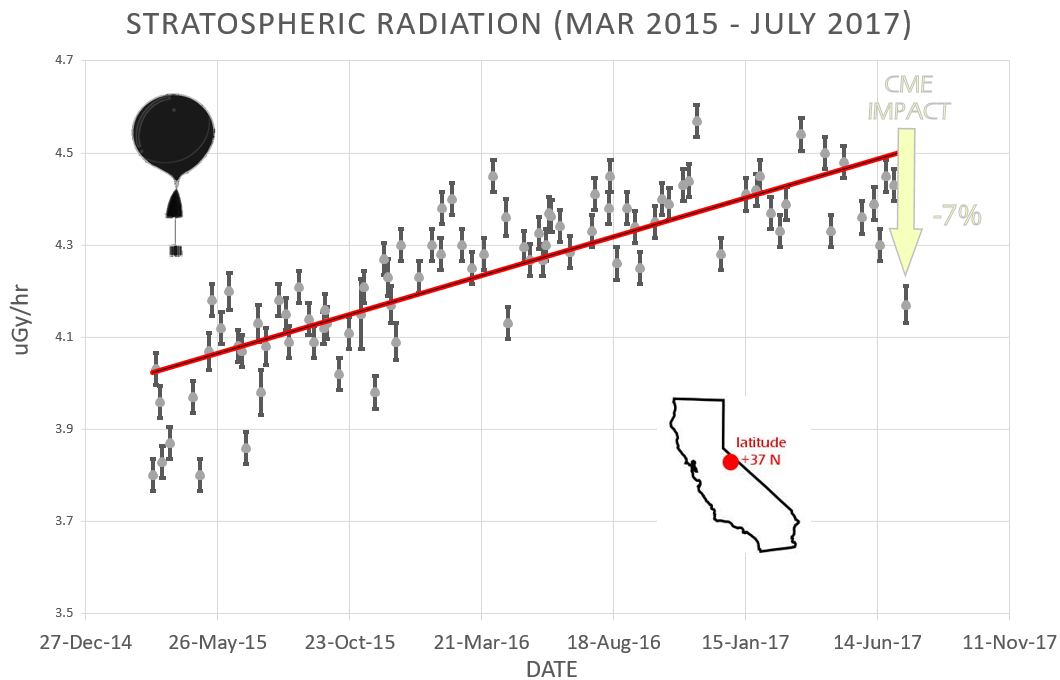 CME that hit Earth on July 16, 2017 swept aside some of the cosmic rays. Credit: SpaceWeather.com 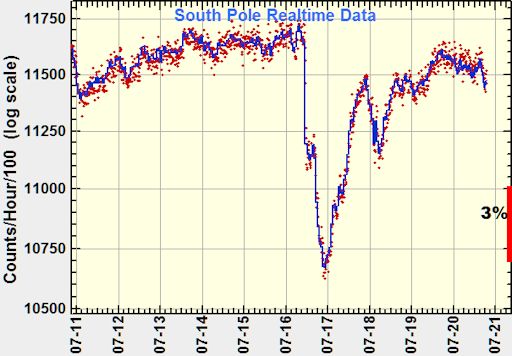 CME that hit Earth on July 16, 2017 swept aside some of the cosmic rays. Credit: SpaceWeather.com

This is called a "Forbush Decrease," named after physicist Scott E. Forbush who first described it in the 20th century. Wherever CMEs go, cosmic rays are deflected by magnetic fields inside the solar storm clouds. As a result, when solar activity is high, cosmic radiation around Earth is relatively low – a yin-yang relationship that holds throughout all phases of the solar cycle.

Lately, cosmic rays around Earth have been intensifying as the solar cycle plunges toward minimum. The CME of July 16th reversed that trend, but only for a few days. Solar activity has returned to low levels and cosmic rays are on the rise again, SpaceWeather reports.

Cosmic rays they penetrate commercial airlines, dosing passengers and flight crews so much that pilots are classified as occupational radiation workers. Some research shows that cosmic rays can seed clouds and trigger lightning, potentially altering weather and climate. Furthermore, there are studies ( #1, #2, #3, #4) linking cosmic rays with cardiac arrhythmias in the general population.