In November 2016, a massive 7.8-magnitude earthquake hit New Zealand, causing significant damage and between 80 000 – 100 000 landslides. Now, an international team of scientists says the quake was so complex and unusual that it is likely to change how scientists think about earthquake hazards in plate boundary zones around the world. According to their study, the heavy shaking in the so-called Kaikōura quake was amassed by ruptures on at least 12 different faults, in some cases so far apart that they were thought to be immune to each other's influence.

To conduct the study, 29 co-authors from 11 national and international institutes combined multiple datasets, including satellite radar interferometry and GPS data that measure the amount of ground movement associated with the earthquake, along with field observations and coastal uplift data.

The team found that parts of New Zealand's South Island moved more than 5 meters (16 feet) closer to New Zealand's North Island and were uplifted by as much as 8 m (26 feet).

"It was the most complex earthquake in modern history," they said. It ruptured at least 12 major crustal faults, and there was also evidence of slip along the southern end of the Hikurangi subduction zone plate boundary, which lies about 20 km (12 miles) below the North Canterbury and Marlborough coastlines.

The Kaikoura earthquake rupture began in North Canterbury and propagated northward for more than 170 km (106 miles) along both well-known and previously unknown faults. It straddled two distinct active fault domains, rupturing faults in both the North Canterbury Fault zone and the Marlborough Fault system.

The largest movement during the earthquake occurred on the Kekerengu fault, where pieces of Earth's crust were displaced relative to each other by up to 25 m (82 feet), at a depth of about 15 km (9 miles). Maximum rupture at the surface was measured at 12 m (39 feet) of horizontal displacement.

Lead author of the study and geodesy specialist Ian Hamling of GNS Science says the quake has underlined the importance of re-evaluating how rupture scenarios are defined for seismic hazard models in plate boundary zones worldwide.

"This complex earthquake defies many conventional assumptions about the degree to which earthquake ruptures are controlled by individual faults, and provides additional motivation to re-think these issues in seismic hazard models," Hamling says.

Hamling says there is growing evidence internationally that conventional seismic hazard models are too simple and restrictive. "Even in the New Zealand modeling context, the Kaikoura event would not have been included because so many faults linked up unexpectedly," he said.

"The message from Kaikoura is that earthquake science should be more open to a wider range of possibilities when rupture propagation models are being developed."

"The Kaikoura earthquake is not only impacting the modeling of future earthquakes, but is also changing the way scientists think about past ones. We've probably misinterpreted some past records of coastal uplift and probably oversimplified past scenarios of earthquakes," said Kate Clark, earthquake geologist at GNS Science and co-author of the new paper.

The scientists analyzed interferometric synthetic aperture radar (InSAR) data from the Copernicus Sentinel-1A and -1B satellites, which are operated by the European Space Agency, along with InSAR data from the Japan Aerospace Exploration Agency's ALOS-2 satellite. They compared pre- and post-earthquake images of Earth's surface to measure land movement across large areas and infer movement on faults at depth. 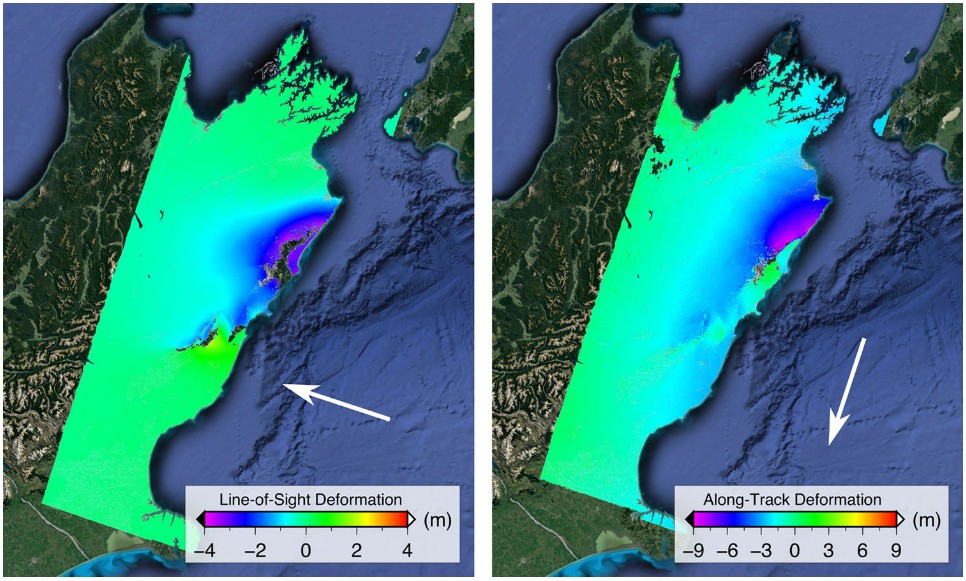 In these two new maps made from the wide-swath images, the colors of the surface displacements are proportional to the surface motion. The wide-swath images cover the entire 170-km (106-mile) length of the complex set of earthquake ruptures. The arrows show the direction of the radar motion measurement. Credit: NASA/JPL-Caltech/JAXA/Google Earth

"We were surprised by the amazing complexity of the faults that ruptured in the Kaikoura earthquake when we processed the satellite radar images," said Eric Fielding of NASA's Jet Propulsion Laboratory. "Understanding how all these faults moved in one event will improve seismic hazard models."

"I think it's a wake-up call," Ned Field, a USGS seismologist told Science Magazine. Field leads California's seismic hazard modeling team and he recently upgraded the likelihood of a large quake in the state to account for the phenomenon.

Scientists are still working on exactly how seemingly unconnected faults separated by 15 km (9 miles) or more ruptured together in the Kaikōura earthquake. The team concluded that previously unmapped faults near the surface bridge the gap, but unseen deeper connections could be at work as well.

Jean-Philippe Avouac, a geologist at the California Institute of Technology said that faults may not even need a physical connection in order to rupture together. "It's possible that seismic waves from a rupture on one fault can propagate through the ground with enough energy to cause a distant fault to slip, a process called dynamic triggering. I'm not sure that we need these links to exist actually," Avouac says.

The authors of the new study, just the first in a series of studies to be published on the rich array of data collected from this earthquake, say the Kaikoura earthquake was one of the most recorded large earthquakes anywhere in the world, enabling scientists to undertake analysis in an unprecedented level of detail.