A large amount of Saharan dust was swept up into a low pressure system over north Africa on February 21, 2017. Thick dust cloud has already reached Spain and Portugal and is now moving east, toward Italy, Malta and the Balkans. The event is expected to last into early next week.

Some dust may be deposited from the air without rainfall, but a significantly larger amount will be deposited with rainfall over the central Mediterranean and the Balkans on Friday and Saturday, February 23 and 24. Look for yellowish Saharan dust on surfaces of objects, such as cars, SWE said.

The Visible Infrared Imaging Radiometer Suite (VIIRS) aboard the Suomi NPP satellite captured these true-color images of the dust cloud on February 21 and 22: 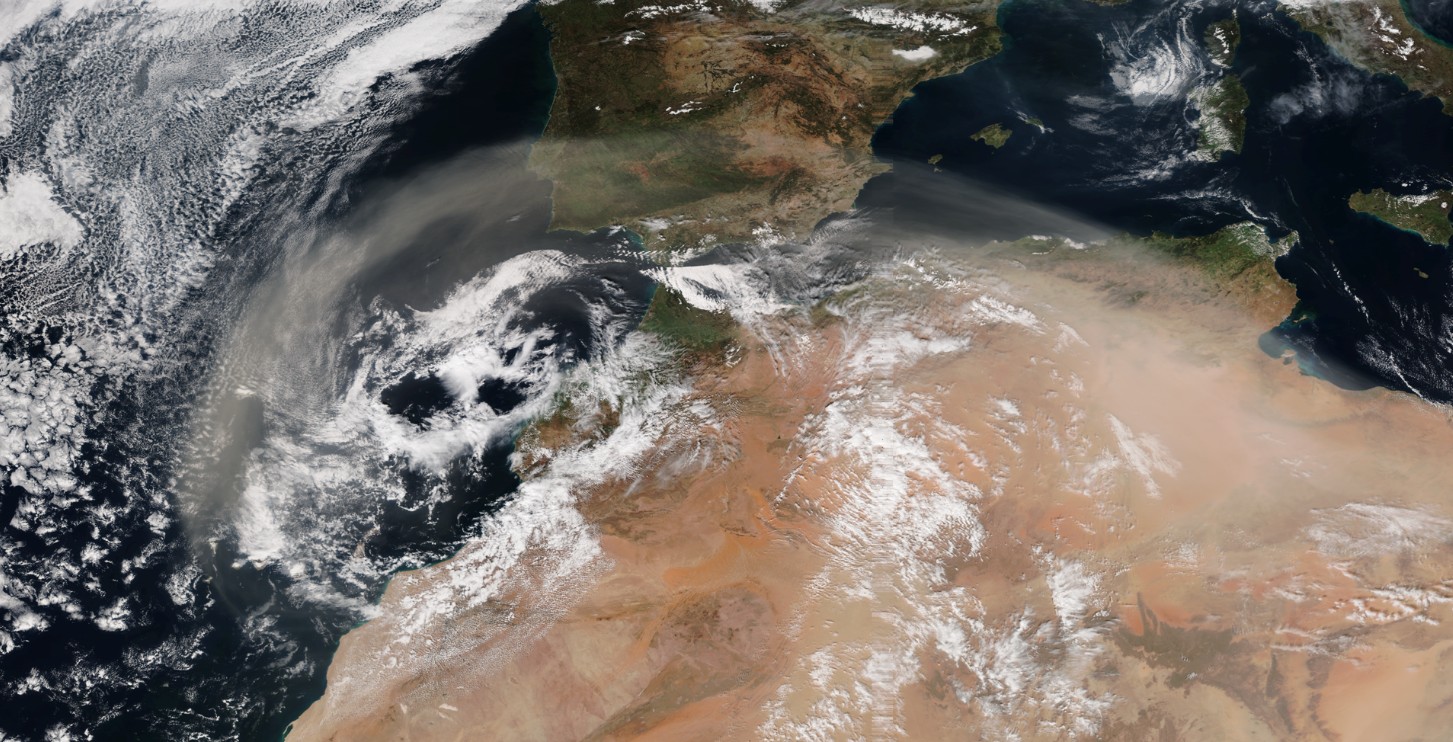 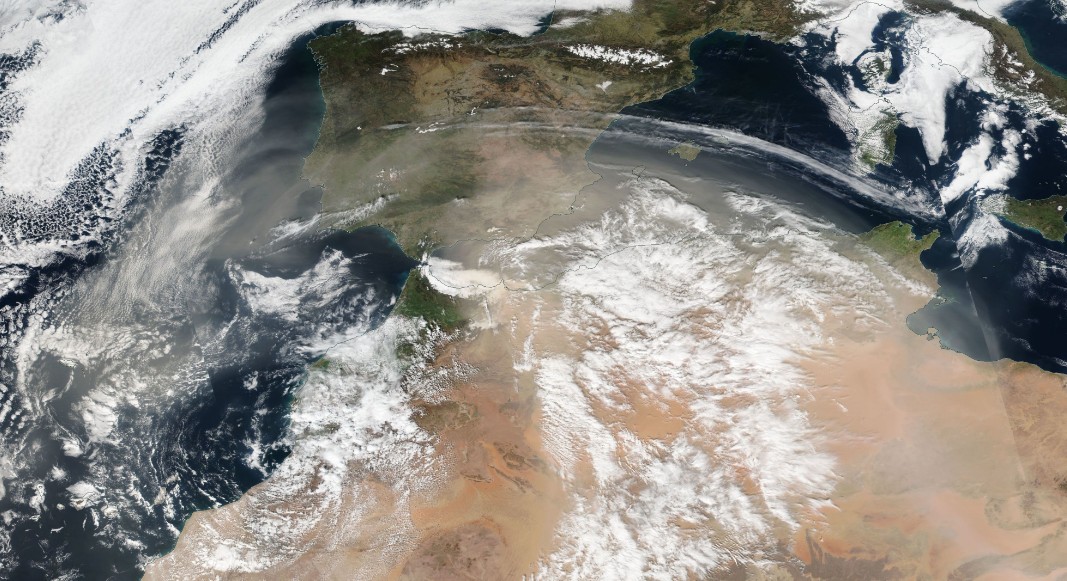 It might seem small, but atmospheric dust is a big deal.

Consisting (mostly) of tiny pieces of metal oxides, clays and carbonates, dust is the single largest component of the aerosols in Earth’s atmosphere, and it likely has a significant impact on the Earth’s climate, as it effects a wide range of phenomena, including from temperatures in the Atlantic Ocean to the rate of snowmelt in the southwestern U.S., NOAA explains.

Dust may also affect hurricanes, as recent research based on data sets dating back to the 1950s suggests an inverse relationship between dust in the tropical North Atlantic and the number of Atlantic hurricanes during the past several decades.

Improving our ability to detect dust in the atmosphere is beneficial because just how much dust enters the atmosphere each year is unclear – projections range from 200 to 5 000 teragrams a year (a teragram, Tg, equals one trillion grams), the agency said.

Scientists estimate that, on average, about 20 Tg of dust are suspended in the atmosphere at any given time, but seasonal variability is common. Inter-annual variability is also a factor, as ocean-related weather phenomena such as the North Atlantic Oscillation and El Niño have been associated with greater Saharan dust transport across the Atlantic.

Lake Chad, which sits just below it in the north-central part of Africa, is the Earth’s largest single source of atmospheric dust. In fact, about half of the dust suspended in Earth’s atmosphere originates in North Africa, due to both the abundance of dust sources there and the region's position under the subtropical jet stream, which carries dust around the world. The rest is said to come from just a handful of other well-known dust-producing regions, including northwestern China’s Taklimakan Desert, parts of Arabia, Iran, the shore of the Caspian Sea, the Lake Eyre Basin in Australia, and the area around Utah’s Great Salt Lake.

Atmospheric dust arises from these locations because they all share a common trait: they all sit in low-elevation basins near or surrounded by mountains, which feed rivers that deposit large amounts of sediment in these low-lying areas. These particle-producing places also tend to be completely flat and devoid of significant (or any) vegetation cover, two features that allow winds to build momentum and drive more dust into the atmosphere.

On February 18 and 19, dust storms enveloped the countries bordering the Persian Gulf. The storm temporarily cut off power to much of the Iran's oil-rich Khuzestan province, reduced oil production by 700 000 barrels per day and sparked protests against local officials, Albawaba reports.

Dust storms can also have a major impact on human health, particularly the respiratory system. "A dust storm consists of a massive amount of particulates in the air, and when people breathe it, these can get down their lungs and cause respiratory illness and heart disease and so on," said Diarmid Campbell-Lendrum, a health and climate change expert with the WHO.

The above-mentioned storm forced 218 people in Iran to be hospitalized due to respiratory problems. Their officials said the dust storms of the region originate in Iraq, Saudi Arabia, Jordan and Syria, and urged authorities in those countries to combat the problem with irrigation projects and other measures.

According to Enric Terradellas, a meteorologist with the WMO's sand and dust storm prediction center for the Middle East, there has been a significant increase in the frequency and the intensity of sand and dust storms in the region in the past 15 years or so.

"One of the main sources of sand and dust storms is Iraq, where the flow of rivers has decreased because of a race in dam constructions in upstream countries. That has led to the disappearance of marshes and drying up of lakes both in Iraq and Iran, and the sediments left behind are very important source of dust in the region," Terradellas said.

In May 2016, Amin Baqeri, the governor of Rigan, Iran's southeastern province of Kerman, said 16 villages in Rigan were buried in sand and became completely deserted amid consistent sand storms. "Massive sand influx and consistent sand storms have led to the complete disappearance of the villages under piles of sand. Agriculture and livestock are totally ruined in this area, and it suffered a loss of nearly $9 million USD (320 billion rials). 80 other villages are also endangered and might become subjected to be deserted too," Baqeri warned.

In September 2015, a severe sand storm engulfed much of the Middle East. It caused at least 12 casualties and sent nearly 1 000 to hospitals across the region. According to the Lebanese Health Ministry, hundreds of people were hospitalized with breathing problems and two women have died. The meteorological department at Beirut's Rafik Hariri International Airport described the storm as being "unprecedented" in Lebanon's modern history.