Since February 17, 2017, a strong thermal signal is visible on satellite data from what seems to be the summit of Anak Krakatau (Child of Krakatau), the site of frequent eruptions since 1927. The last eruption of this volcano occurred on March 31, 2014 (VEI 1).

What causes the thermal signal exactly is unknown. While non-volcanic causes (e.g. forest fires) cannot be ruled out, it is more likely that a new mass of lava has arrived at the crater, probably in the form of a new dome, Volcano Discovery explains.

"In that case, Krakatau might be entering a new eruptive phase, something which would not be a surprise, statistically. So far, there is no confirmation of significant ash emissions observed, which could mean that the activity, if there is, is only effusive for now."

As soon as the new activity is confirmed and strong enough to merit it, Volcano Discovery plans to organize an eruption special tour. If you're potentially interested in joining them on such a coming Krakatau Special, please contact via email or through the inquiry form of the Krakatau Special.

The eruption at has been confirmed. One of Volcano Discovery readers spent last night at Anak Krakatau and saw intense strombolian-vulcanian type activity from the summit. 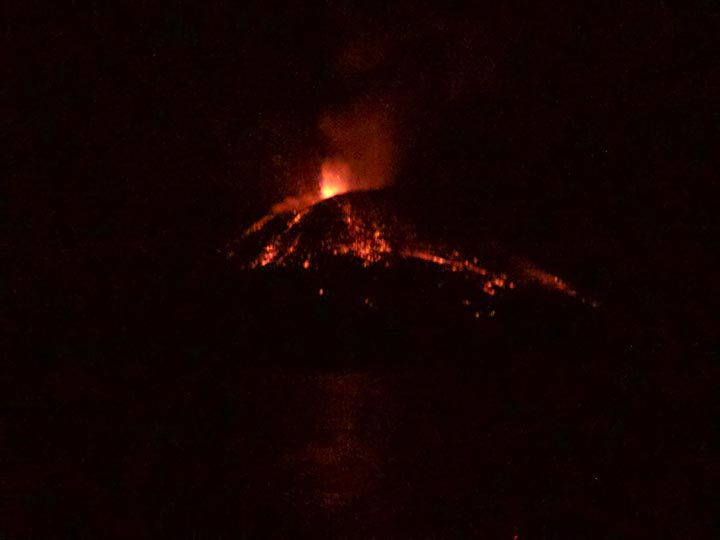 The renowned volcano Krakatau (frequently misstated as Krakatoa) lies in the Sunda Strait between Java and Sumatra. Collapse of the ancestral Krakatau edifice, perhaps in 416 CE, formed a 7-km-wide caldera. Remnants of this ancestral volcano are preserved in Verlaten and Lang Islands; subsequently Rakata, Danan and Perbuwatan volcanoes were formed, coalescing to create the pre-1883 Krakatau Island. Caldera collapse during the catastrophic 1883 eruption destroyed Danan and Perbuwatan volcanoes, and left only a remnant of Rakata volcano.

This eruption, the 2nd largest in Indonesia during historical time, caused more than 36,000 fatalities, most as a result of devastating tsunamis that swept the adjacent coastlines of Sumatra and Java. Pyroclastic surges traveled 40 km across the Sunda Strait and reached the Sumatra coast. After a quiescence of less than a half century, the post-collapse cone of Anak Krakatau (Child of Krakatau) was constructed within the 1883 caldera at a point between the former cones of Danan and Perbuwatan. Anak Krakatau has been the site of frequent eruptions since 1927. (GVP)