Geologists have confirmed that a group of 49 sinkholes discovered in the mountains near Hanzhong city of northwest China’s Shaanxi Province contains the largest number of such a rare geological phenomena in the world.

The scientists took about four months to survey the entire area, spreading over the Ningqiang, Nanzheng, Xixiang, and Zhenba counties, and find the sinkholes. The surveyed area covers 5 000 km2 (1930.5 mi2) while the 49 sinkholes were discovered on a surface covering over 600 km2 (231.7 mi2).

The sinkholes have formed in a process where the carbonate rocks eroded over a prolonged period of time by an underground river. According to geologists, such a rare phenomenon can form over 500 000 years. So far, only 130 such sinkholes have been found across the globe.

An international group of scientists was called by the Shaanxi government in October 2016 to conduct a survey in the area. The discovery will be of great scientific values.

According to Jean Poutasi, a French cave explorer the sinkhole found in Ningqiang county is the "world's most beautiful sinkhole".

Zhang Yuanhai, a senior engineer with Institute of Karst Geology under Chinese Academy of Geological Science, said that the scientific value of Hanzhong sinkholes was unmatched. 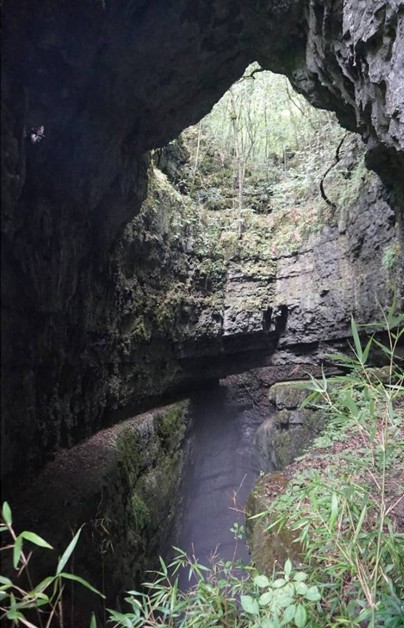 "The sinkholes found before are located between north latitude 24 degrees and 31 degrees, but Hanzhong sinkholes are located near north latitude 33 degrees, and the first geological landscape found in the most north boundary of the humid tropical and subtropical Karst landform area, which has exceeded expectations of all geologists," said Zhang Yuanhai, a senior engineer at the Institute of Karst Geology under Chinese Academy of Geological Science.

Liu Tongliang, director of the Institute of Karst Geology at the Chinese Academy of Geological Science, explained the discovery will aid in understanding the evolution of the ancient environment in the south of Qinling Mountains, and the ancient climate change that occurred in the northern and southern China, and the world.