The Icelandic Met Office (IMO) has raised the aviation alert status at Katla volcano from green to yellow after a swarm of earthquakes started on September 29, 2016, and intensified today.

An intense seismic pulse started today at 12:02 UTC with several earthquakes around magnitude 3 and above. No seismic tremor has been detected.

Due to this unusually high level of unrest, the IMO has raised Aviation Color Code from Green to Yellow. This means that the volcano is experiencing signs of elevated unrest above known background levels.

There are no other signs, such as deformation of the caldera or increase in the hydrothermal gas release, have been noticed. 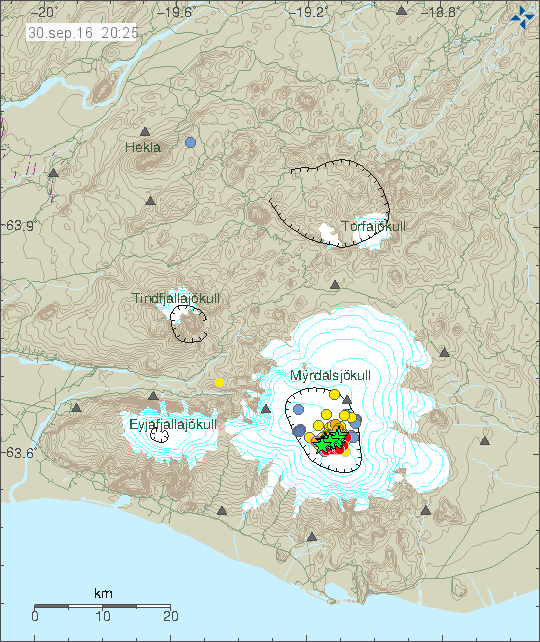 "This [sign of eruption] could be a sharp increase in harmonic tremor associated with magma movement, it might be inflation of the volcano as magma rises (measured by the GPS stations around the volcano). It might be a change in the strain measurements on instruments around Katla as the edifice shifts due to new magma. It might also be changing water discharge and chemistry from the many rivers that feed from the caldera," volcanologist Erik Klemetti explained.

On August 29, 2016, two earthquakes of about M4.5 occurred in the NE part of Katla's caldera, IMO reported. Those were the largest earthquakes detected at Katla since 1977. A swarm of over 100 earthquakes followed, of which the largest was M3.3. After the swarm ended, seismicity continued at low levels.

Katla volcano, located near the southern end of Iceland's eastern volcanic zone, is hidden beneath the Myrdalsjökull icecap. The subglacial basaltic-to-rhyolitic volcano is one of Iceland's most active and is a frequent producer of damaging jökulhlaups, or glacier-outburst floods. A large 10 x 14 km subglacial caldera with a long axis in a NW-SE direction is up to 750 m deep. Its high point reaches 1380 m, and three major outlet glaciers have breached its rim.

Although most historical eruptions have taken place from fissures inside the caldera, the Eldgjá fissure system, which extends about 60 km to the NE from the current ice margin towards Grímsvötn volcano, has been the source of major Holocene eruptions. An eruption from the Eldgjá fissure system about 934 CE produced a voluminous lava flow of about 18 cu km, one of the world's largest known Holocene lava flows. Katla has been the source of frequent subglacial basaltic explosive eruptions that have been among the largest tephra-producers in Iceland during historical time and has also produced numerous dacitic explosive eruptions during the Holocene. (GVP)