A major fire event is threatening natives and wildlife in the central Amazon region of Peru. According to the National Civil Defense Institute, the fire broke out on September 10 in an indigenous community called Pitsiquia, in the heart of Peruvian Amazon, and is still not under control.

This region is known for its isolation, dense rainforest and tropical crops, and authorities are worried it could wreak chaos on a major indigenous reserve, home to native communities that have limited contact with the outside world, and spread to the Otishi National Park nearby.

"The focus of the fire, the most dangerous part, has entered the Ashaninka reserve. It's advancing very quickly," said Jimmy Laura, a spokesman for the Rio Tambo municipal district. "If the fire crosses the reserve, it will reach the national park," he told AFP.

Mayor of Rio Tambo District said this is the largest fire event to happen in the region in a decade.

But wildfires are not localized to the Junin region. They are burning all over the Peruvian Amazon, the Mongabay Latam said. 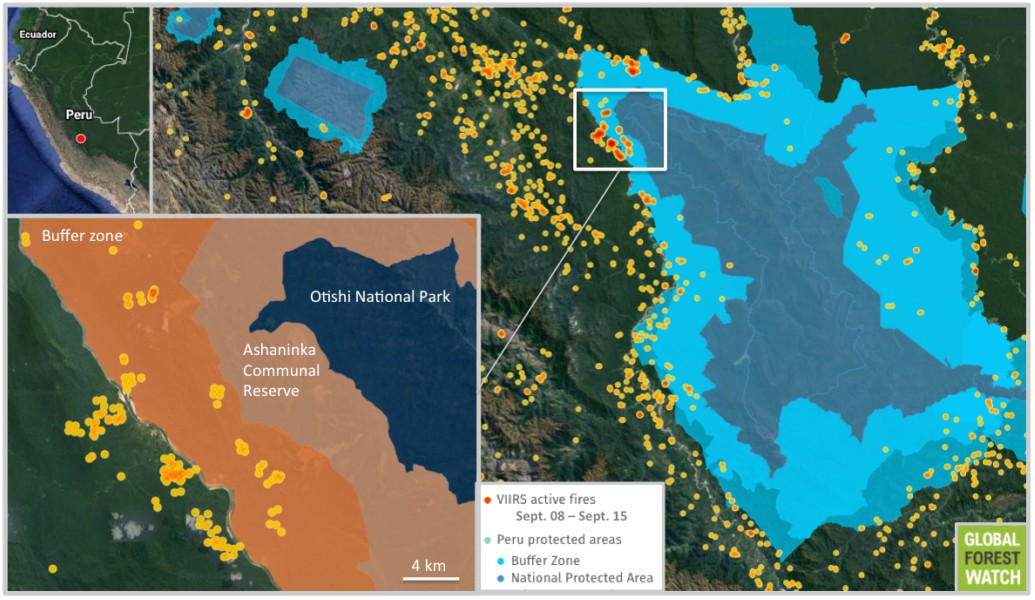 Data from NASA displayed on the forest monitoring platform Global Forest Watch (GFW) show fires approaching the Ashaninka Communal Reserve and Otishi National Park. By September 15, the fires had moved within 2 km (1.2 miles) of the reserve and 5 km (3.1 miles) of the national park. Credit: GFW via Mongabay Latam 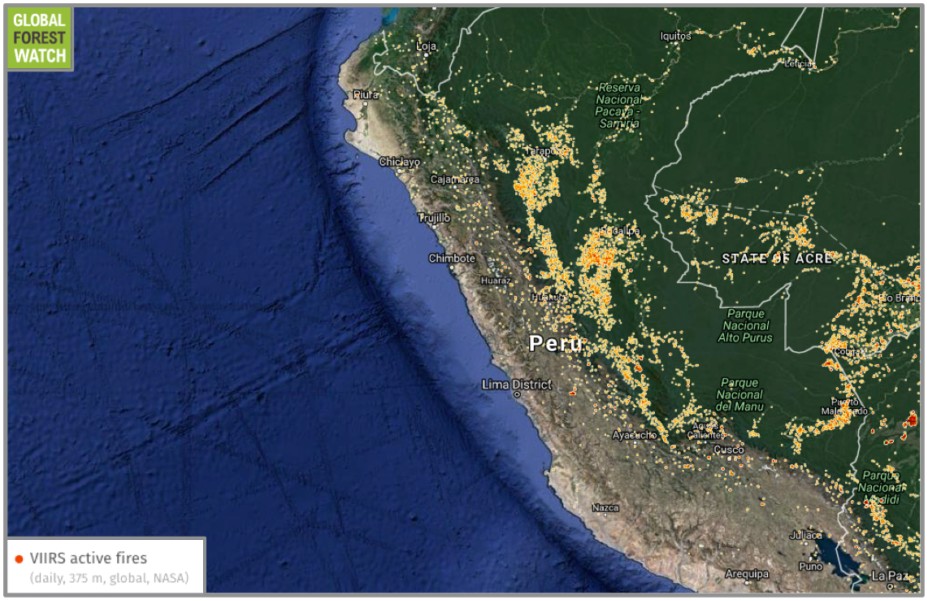 Wildfires aren’t just a problem in Junin Department, but are occurring all over the Peruvian Amazon. In all, NASA recorded almost 10 000 fires in Peru between September 12 and September 19, 2016. Credit: GFW via Mongabay Latam

According to the AFP, the officials said a drought had left the region vulnerable. The fire then broke out when local farmers were burning a pasture to clear it for planting.

"Unfortunately, this practice can get out of control," said Marco Pastor, an adviser at the national parks service.

The most affected are the Ashaninka communities. There have been 11 locations directly affected: eight native communities and three rural.

"The situation has become more difficult due to the drought caused by climate change. There are 28 points of fire outbreaks, three around the Ashaninka Communal Reserve and four points just 950 meters [0.6 miles] away from the reserve. Since August, when the first reports of the fire started, there has been 36 km [22.3 miles] of continuous fire spreading over 105 km [65 miles],” Steffy Rojas of the Ashaninka central station of the Ene River (CARE) told Mongabay Latam.