According to Inciweb, an interagency all-risk incident information management system, there is an imminent threat to public safety, rail traffic, and structures in the Cajon Pass, Lytle Creek, Wrightwood, Oak Hills, and surrounding areas. An estimated 34 506 homes and 82 640 people are being affected by the evacuation warnings.

As of 15:00 UTC (08:00 PDT) on August 17, the fire was 0% contained. There is currently 1 309 personnel on the scene. 152 engines, 18 crews, 8 air tankers, 2 Very Large Air Tankers (VLATS), and 8 Helicopters, including night flying helicopters. A National Type 1 Incident Management Team has been requested. An unknown number of structures are damaged and destroyed.

A Red Flag weather conditions will remain in effect until 21:00 PDT (04:00 UTC on Thursday, August 18). Hot, dry and breezy conditions are expected to continue on Thursday as well as very poor relative humidity. Winds of 32 km/h (20 mph) with gust to 48 km/h (30 mph) are expected.

The Blue Cut fire was first reported at 17:36 UTC (10:30 PDT, August 16) near Interstate 15 and jumped to nearly 1 500 acres (6 hectares) in size within just two hours. As the fire continued to surge late Tuesday afternoon, Gov. Jerry Brown declared a state of emergency in San Bernardino County.

Homes could be seen burning along Highway 138 and television footage showed flames creeping toward a McDonald’s and engulfing a large cross, setting it ablaze, the Los Angeles Times reported.

“We know that we’ve lost structures, it’s unknown how many at this time,” said Tracey Martinez, public information officer for the San Bernardino County Fire Department. “This fire is still raging out of control.” 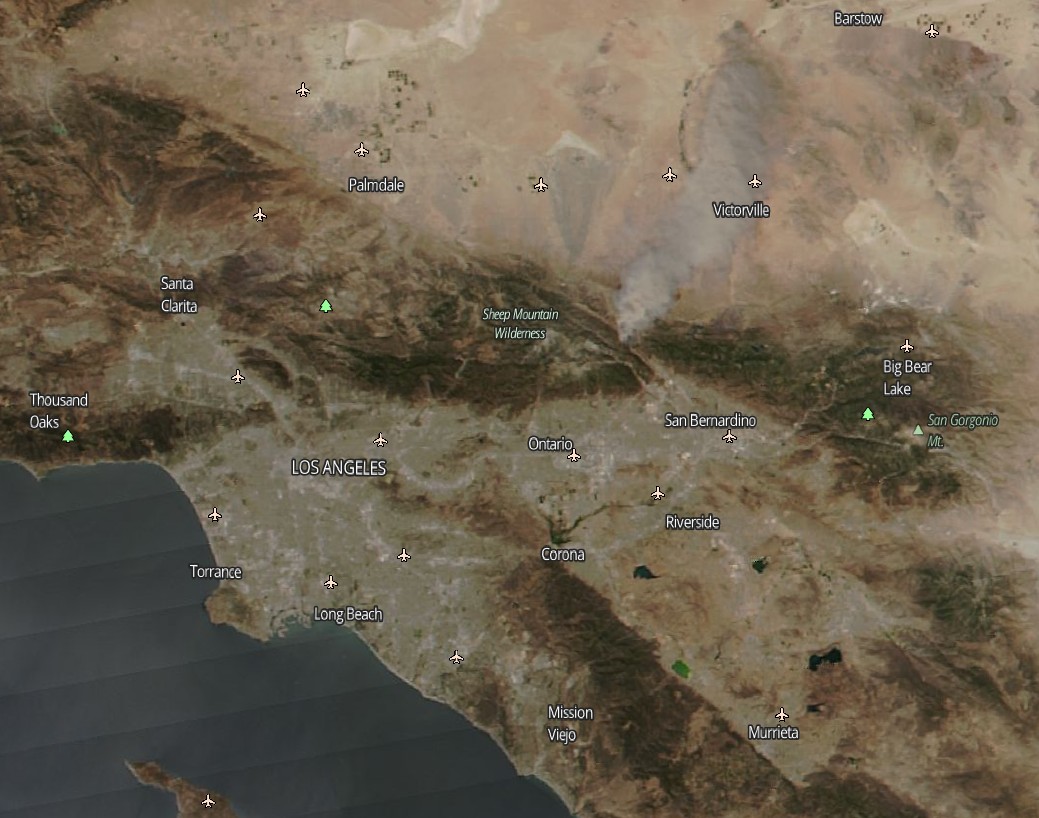 Firefighters were able to shelter in place within a nearby structure, but two firefighters sustained minor injuries. Both firefighters were transported to a local hospital where they were treated and released and are now back on the fire line defending structures. One SBCoFD fire engine sustained moderate fire damage.

Live aerials of Bluecut Fire (Note: the connection may break sometimes. Turn off the Live mode and start the video from the beginning)

While drones have not been seen over the Bluecut Fire, fire managers would like to remind the public that hobby drones, or (UAS) unmanned aircraft systems, pose a major safety threat to firefighting pilots and firefighters. When a hobby drone is flown into a fire area, incident commanders have no choice but to suspend air operations and ground aircraft until the drone is removed from the area.

Ellen Pollema from Happy Jack said she and her husband were not surprized by the blaze's rapid growth. "It's part of living in this canyon. People need to be prepared and just know that that's part of the risk of living in these kinds of areas." Pollema added she worked with several of her neighbors to ensure that their properties are cleared of brush and anything else that could make their homes more flammable.