A new research based on the fieldwork conducted in Alaska's Aleutian Islands indicates a section of the Aleutian Subduction Zone fault could generate a large earthquake, strong enough to produce a large tsunami across the Pacific to Hawaii. New data can aid the tsunami hazard preparedness efforts around the Pacific Rim.

The newest results provide strong evidence for a prehistoric tsunami in the Aleutian Islands, therefore indicating that a reevaluation of earthquake and tsunami hazards in this region might be necessary.

A slow, continuous motion along the creeping faults in the region is exhibited, and, because friction between the two tectonic plates does not fully lock them, it is unclear whether they are capable of hosting large earthquakes. 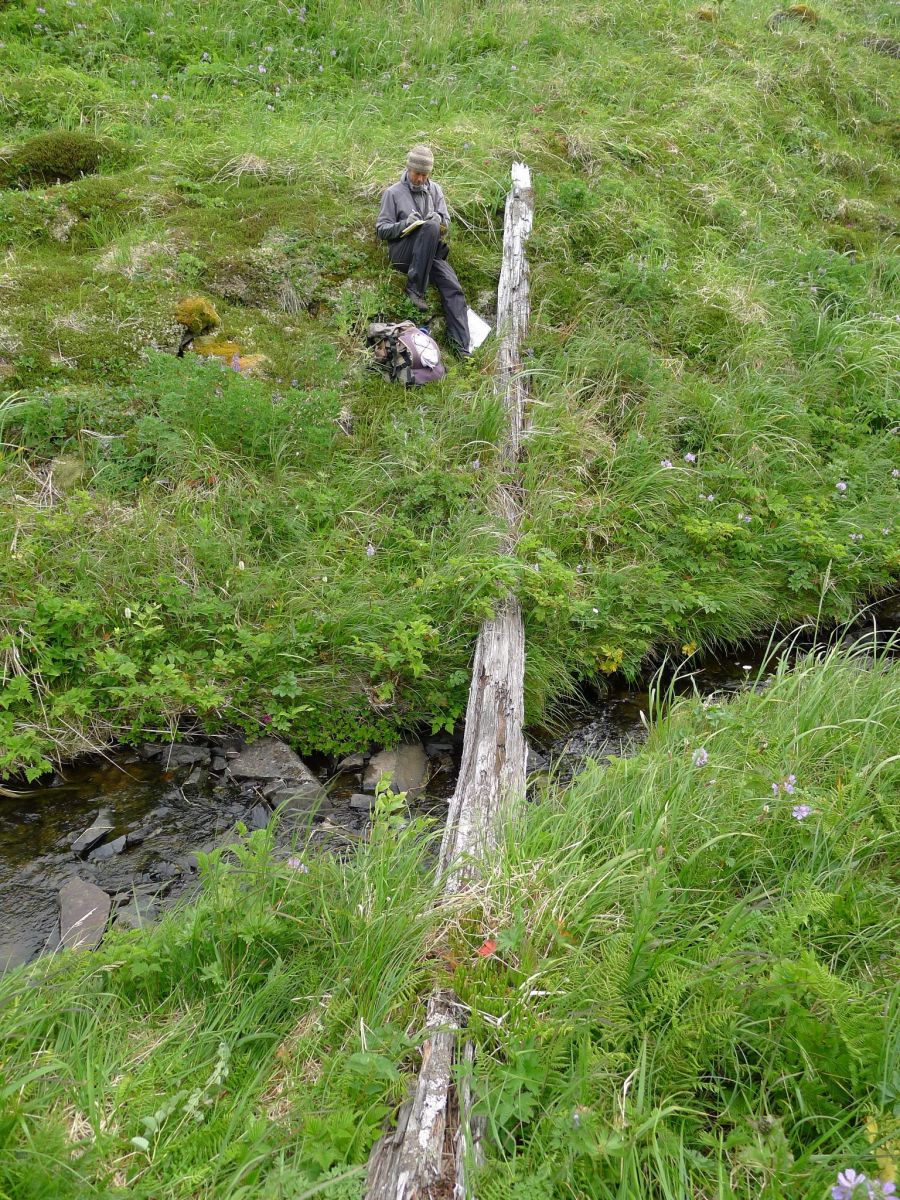 A geologist takes field notes to document the discovery of a 9 m (30 feet) long driftlog stranded more than 805 m (0.5 mi) inland at Stardust Bay on the remote Alaskan island of Sedanka. The log, stranded at an elevation of more than 18 meters (60 feet) above sea level, was carried inland and deposited in 1957 by a large tsunami generated by the magnitude 8.6 Andreanof Islands earthquake. The elevation of the driftlog provides an estimate of the minimum runup of tsunami waves. Stardust Bay, Sedanka Island, Alaska. Image credit: Richard Koehler

In regions where measurements suggest a creeping megathrust (the gently-dipping fault between converging tectonic plates, where one plate thrusts the other one below), the current scientific models are no longer satisfying. In usual circumstances, they forecast the highest seismic hazard in the area where the tectonic plates are locked together. 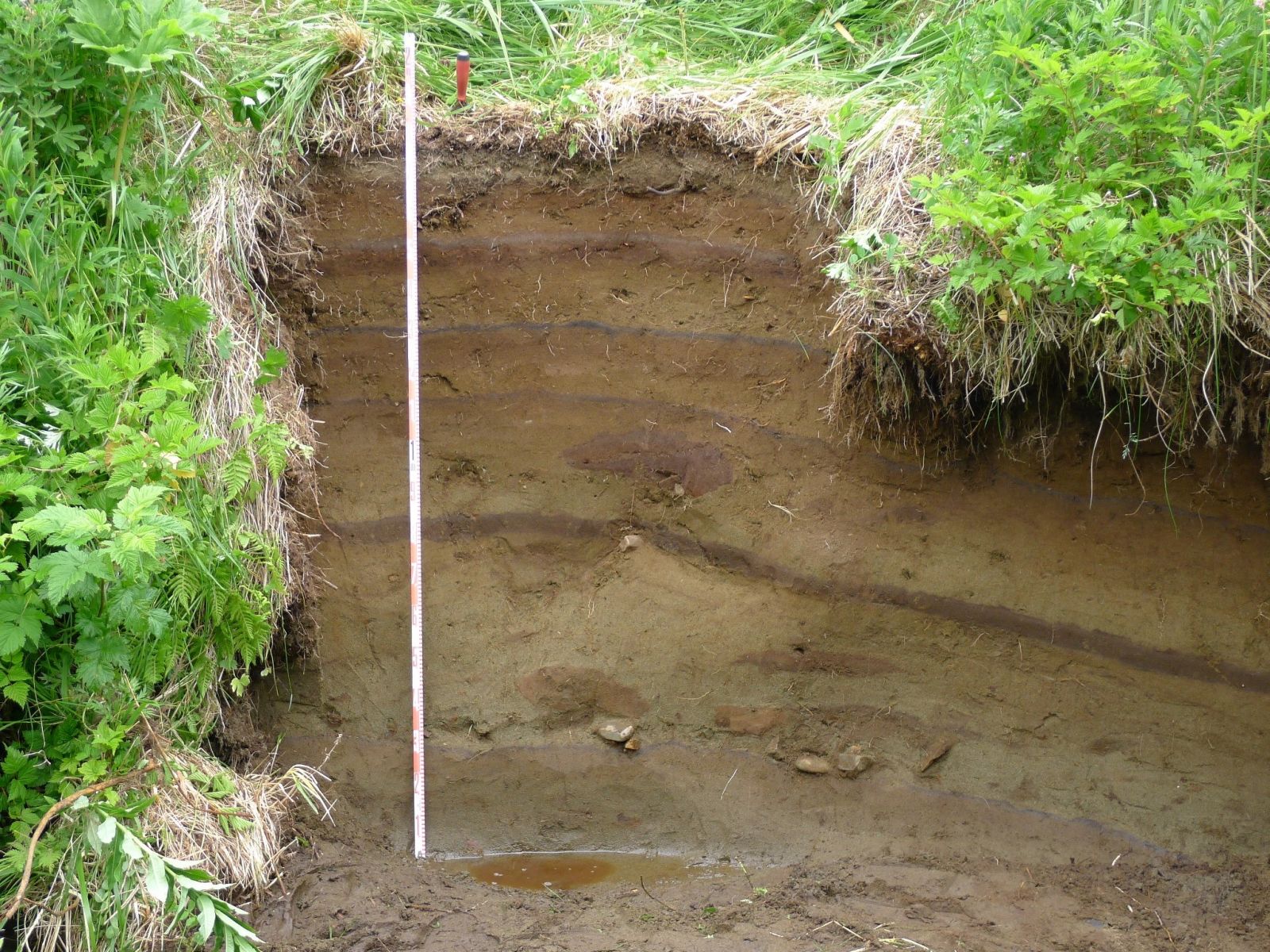 An outcrop composed of six tsunami deposits on the inland side of the lowland backing Stardust Bay over 805 m (0.5 miles) from the sea. Brown soils developed into the top of each sand sheet and black tephra (air fall volcanic ash) layers between two of the sand deposits aided correlation of the six sand sheets across the study area.  Image credit: Richard Koehler

A creeping part of the eastern Aleutian Subduction Zone is located between the rupture areas of two historical earthquakes dating back to 1946 and 1957 which produced devastating tsunamis in the region.

The newest study is the first which identified geological evidence for repeated prehistoric tsunamis along a creeping part of the eastern Aleutian Subduction Zone located between the two historical earthquakes. 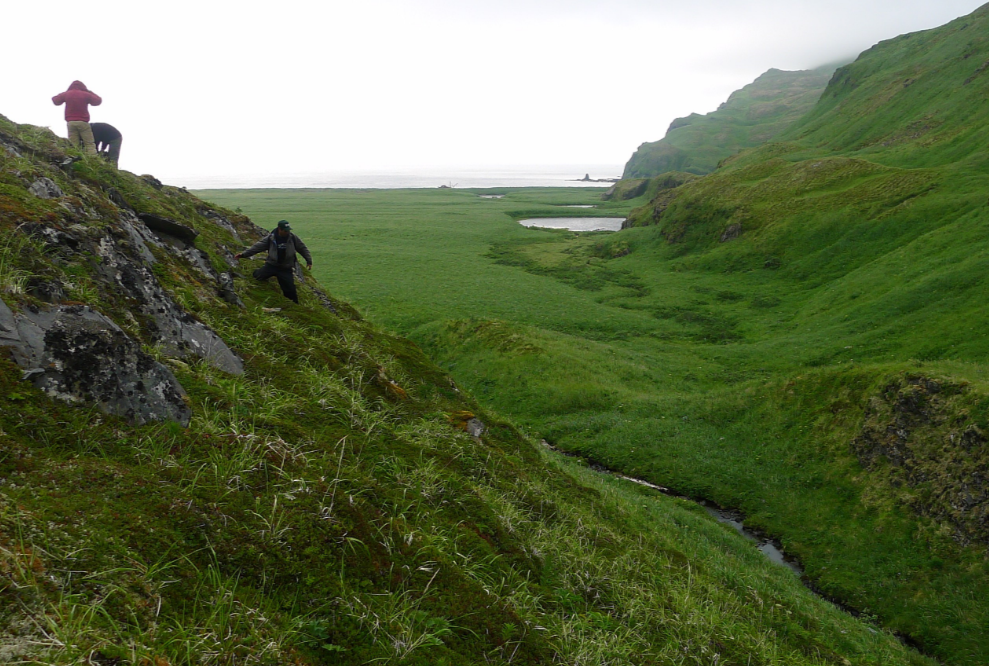 Three geologists scramble down a hillside on Sedanka Island that overlooks Stardust Bay. The geologists documented driftlogs stranded at elevations up to 60 m (196 feet) above sea level and over 804 m (.5 mile) inland. The driftlogs, one visible in the lower right of the photo, were probably carried inland and deposited in 1957 by a tsunami generated by the magnitude 8.6 Andreanof Islands earthquake. Image credit: Robert Witter, USGS

After the quakes, the large tsunamis most likely deposited six sand sheets, up to 15 m (50 feet) above sea level, which suggests there might be a previously unknown source of tsunamis which could pose a new hazard to the Pacific basin.

The scientists have used hand-driven cores, augers, and shovels to reveal sediments blanketing a lowland facing the Pacific Ocean, and have been able to estimate the times of sand sheet deposition by using radiocarbon dating. It turns out that the youngest sand sheet might have been deposited by a large tsunami triggered by the 8.6M Andreanof Islands earthquake in 1957. 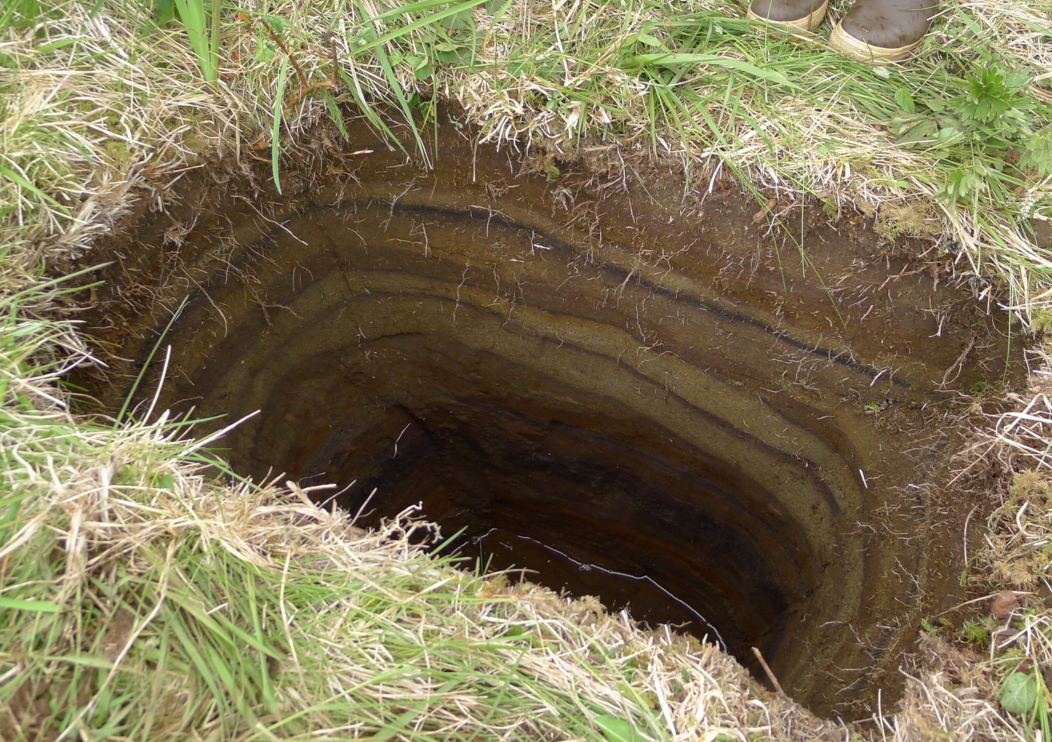 On a ridge behind Stardust Bay at an elevation of 14 m (46 feet) above sea level, a shallow pit reveals five sand sheets deposited by tsunamis in the past 1700 years. Image credit: Robert Witter, USGS

Older sand sheets may have resulted from even larger tsunamis and the oldest tsunami sand layer was deposited about 1 700 years ago.

The study concluded the large tsunamis in the eastern Aleutians have, on average, recurred every 300 to 340 years and provided additional information relevant to new tsunami evacuation zone maps for Hawaii.

Featured image: Three geologists scramble down a hillside on Sedanka Island that overlooks Stardust Bay. The geologists documented driftlogs stranded at elevations up to 60 m (196 feet) above sea level and over 804 m (.5 mile) inland.
The driftlogs, one visible in the lower right of the photo, were probably carried inland and deposited in 1957 by a tsunami generated by the magnitude 8.6 Andreanof Islands earthquake.
Credit: Robert Witter, USGS