The discovery of hundreds of giant comets in the outer planetary system over the last two decades means that these objects pose a much greater hazard to life than asteroids, a team of astronomers from Armagh Observatory and the University of Buckingham report.

The giant comets, termed centaurs, move on unstable orbits crossing the paths of the massive outer planets Jupiter, Saturn, Uranus and Neptune. The planetary gravitational fields can occasionally deflect these objects in towards the Earth.

Centaurs are typically 50 to 100 km (31 – 62 miles) across, or larger, and a single such body contains more mass than the entire population of Earth-crossing asteroids found to date. Calculations of the rate at which centaurs enter the inner Solar System indicate that one will be deflected onto a path crossing the Earth’s orbit about once every 40 000 to 100 000 years. Whilst in near-Earth space they are expected to disintegrate into dust and larger fragments, flooding the inner Solar System with cometary debris and making impacts on our planet inevitable. 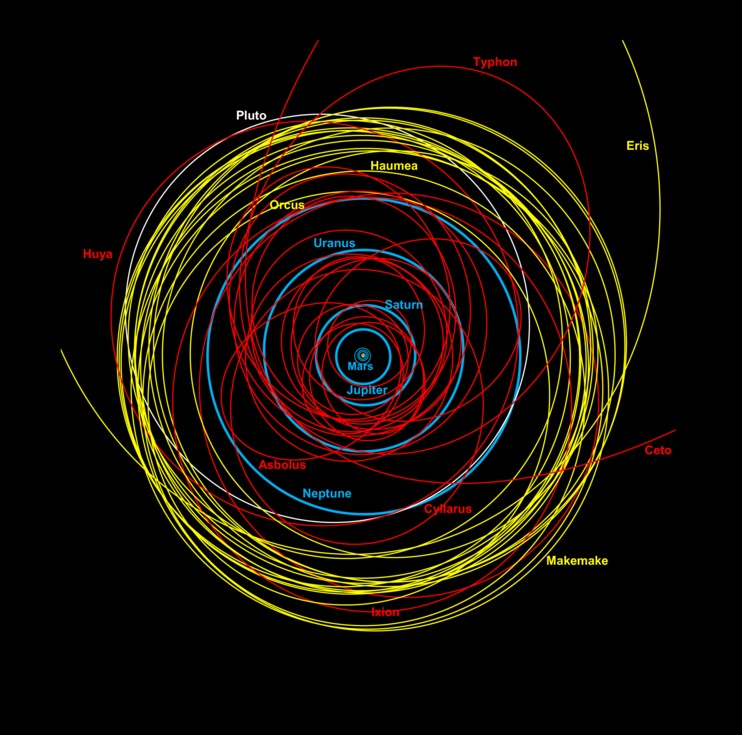 The outer solar system as we now recognise it. At the centre of the map is the Sun, and close to it the tiny orbits of the terrestrial planets (Mercury, Venus, Earth and Mars). Moving outwards and shown in bright blue are the near-circular paths of the giant planets: Jupiter, Saturn, Uranus and Neptune. The orbit of Pluto is shown in white. Staying perpetually beyond Neptune are the trans-Neptunian objects (TNOs), in yellow: seventeen TNO orbits are shown here, with the total discovered population at present being over 1 500. Shown in red are the orbits of 22 Centaurs (out of about 400 known objects), and these are essentially giant comets (most are 50-100 km in size, but some are several hundred km in diameter). Because the Centaurs cross the paths of the major planets, their orbits are unstable: some will eventually be ejected from the solar system, but others will be thrown onto trajectories bringing them inwards, therefore posing a danger to civilisation and life on Earth. Credit: Duncan Steel.

Known severe upsets of the terrestrial environment and interruptions in the progress of ancient civilisations, together with our growing knowledge of the interplanetary matter in near-Earth space, indicate the arrival of a centaur around 30 000 years ago. This giant comet would have strewn the inner planetary system with debris ranging in size from dust all the way up to lumps several kilometres across.

Specific episodes of environmental upheaval around 10800 BCE and 2300 BCE, identified by geologists and palaeontologists, are also consistent with this new understanding of cometary populations. Some of the greatest mass extinctions in the distant past, for example the death of the dinosaurs 65 million years ago, may similarly be associated with this giant comet hypothesis.

"In the last three decades, we have invested a lot of effort in tracking and analysing the risk of a collision between the Earth and an asteroid. Our work suggests we need to look beyond our immediate neighbourhood too and look out beyond the orbit of Jupiter to find centaurs. If we are right, then these distant comets could be a serious hazard, and it’s time to understand them better," Professor Bill Napier of the University of Buckingham said.

The researchers have also uncovered evidence from disparate fields of science in support of their model. For example, the ages of the sub-millimetre craters identified in lunar rocks returned in the Apollo program are almost all younger than 30 000 years, indicating a vast enhancement in the amount of dust in the inner Solar system since then.