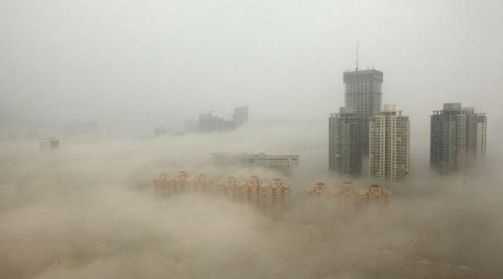 The authorities first put out the orange alert on December 7, and have upgraded it since, as the poor air quality was indicated by 208 micrograms per cubic meter of hazardous tiny airborne particles. The warning is in effect from 7 am on December 8 until 12:00 am on December 10 (local time).

By issuing the highest level alert strict restrictions were posed on some companies to immediately stop or limit their production, while the outdoor construction work was banned at the same time. Primary schools and kindergartens were canceled in the period. Residents of Beijing have been prompted to remain indoors whenever possible and use public transportation in case the travel is necessary. Certain vehicles types have been subject to traffic restrictions, and cars have been limited in their driving.

This is Beijing. That is not fog – it is pollution. Their gov't issued a "red alert" for air quality today. pic.twitter.com/cl0Wesd3LL

The intense smog pollution, dangerous to public health began on November 27, and was the highest during previous week when concentrations of hazardous aerosols climbed all the way to 666 micrograms per cubic meter. However, only orange alert was issued on the occasion, which is probably due to the warning level system being fairly new as it was only established in March 2015.

The current smog concentration is expected to reach maximum on December 9, and start dropping afterwards, the China National Environment Monitoring Center reported. According to the World Health Organization, a safe concentration level of pollution particles is only 25 micrograms per cubic meter, which indicates just how extreme the current situation is.

'Airpocalypse' shuts down Beijing. Expert tells me what it's all about. #RedAlert https://t.co/sseJ33wQzW Pic: Getty pic.twitter.com/6oBIja9PE2

According to Robert Speta, the WestPacWx meteorologist, the current situation is greatly enhanced by the area of high pressure capping the region and keeping all the aerosols in place over the China's capital. By December 10, another storm system will set in, clearing the air in the region to more tolerable levels.